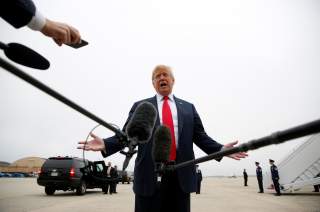 My first reaction to the anonymous anti-Trump op-ed in the New York Times was perhaps unusual for a resident of the swamp, which has been so hyper this week: I chuckled, rolled my eyes, and didn’t even make it to the end of the article before losing interest.

It probably helps that I spent the week in Colorado and Utah, where seemingly no one cares. In the conversations in which I have participated or overheard, this subject has come up zero times. Muted televisions in airports and hotel lounges, which still carry CNN and its angry commentators out of habit, are blissfully ignored as life happens.

Most people outside the swamp either know what the media is up to or just don’t care anymore.

As someone who has held appointed positions in two Republican administrations including the incumbent one, I fall in the former category. I’m quite familiar with the methods the media uses to get unattributed disgruntled junior staff to convey the agenda it desires, which is what’s happening here.

I’m also familiar with the nature of an administration, in which many people who “work for the president” or “work in the White House” may have never met the man who sits in the Oval Office, and who certainly have never provided (or withheld) advice or information that matters to government policy.

Next to the White House sits the imposing Eisenhower Executive Office Building. Across Pennsylvania Avenue from that building is the ugly New Executive Office Building, which is neither new nor executive. It overlooks townhouses surrounding Lafayette Park that provide offices for still more officials. All of these people say they work for the White House, as all are administratively part of what is known as the Executive Office of the President. President Trump probably knows the names of about 3 to 4 percent of these people, tops. Fewer still provide him advice that matters.

Given Anonymous’s citation of foreign policy, veneration of John McCain, and repetition of the banal and disproved trope that Trump prefers dealing with autocrats like Vladimir Putin, I’d guess—and it is only a guess—that the disgruntled author comes from the mid-levels of an agency like the State Department or the ranks of staffers at the National Security Council.

The latter say they work for the president and could stretch the truth to being part of the population of “Trump appointees” cited in the op-ed, even though they are mostly career bureaucrats detailed temporarily to the NSC from agencies like the State Department, Department of Defense and the CIA. Most of these people are patriotic and diligent, although some inevitably pursue their own agenda, especially when a Republican sits atop the executive branch. Luckily, this cohort of staff matters less in the Trump administration than any other in modern time: Trump has pulled policymaking up to the level of his cabinet and himself.

This deprecated level of bureaucrats is the most likely source of the media’s move against Trump this week. Along with the anti-Trump Bob Woodward book, whose unattributed fictions have already been refuted by on-the-record statements from cabinet officials, the New York Times and yet-to-be uncovered middlemen trotted out this op-ed simultaneously—somewhat suspicious timing. It would have been easy to find a disgruntled appointee or detailee to write something like this, especially when provided anonymity. Any decent political campaign could orchestrate it—and the New York Times is a very decent political campaign.

The media’s objective was to get the Washington commentariat focused on how Trump, in their estimation, is unfit to be president, and to do so at the beginning of the traditional post-Labor Day home stretch of the campaign season.

They have largely succeeded in this goal, but in so doing, failed again to learn the lesson that was so easy to conclude from the 2016 election and Trump’s steady popularity levels since then. That lesson is that the media and the commentariat no longer determine public opinion.

No matter how many outraged opinion pieces or news articles (but I repeat myself) the New York Times produces, no matter how many smarter-than-thou analysts with non-prescription eyeglasses mope about sadly on CNN, no matter how many Obama fan boys and girls left in the White House press corps shriek at the president whenever in earshot, it just doesn’t matter anymore.

And while the New York Times op-ed was a nice try by the media, they must on some level, deep down, grasp the new reality: no one hears their screams.

Christian Whiton was a State Department deputy special envoy from 2003 to 2009. He serves as a senior fellow at the Center for the National Interest and the author of Smart Power: Between Diplomacy and War .