This Is Why Trump's Strategy for Iran Will Fail 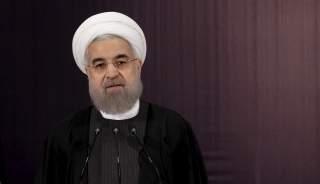 Although a range of legislative and executive options remain in play, Congress’ window to expedite the reimposition of sanctions lifted under the Iran nuclear deal (Joint Comprehensive Plan of Action or JCPOA) has closed. The sixty-day clock to do so began running on October 13, when President Trump announced his comprehensive Iran strategy, which included the decertification of the Iran nuclear deal to Congress. The product of a “complete strategic review,” the strategy was described as aiming to “counter the regime’s destabilizing activity and support for terrorist proxies,” “block their financing of terror,” “address the regime’s proliferation of missiles,” and “deny all paths to a nuclear weapon.” Trump focused on employing coercive tools such as sanctions and threats, including a threat to abrogate the JCPOA absent “fixes,” and appeals to the Iranian people that signaled a possible shift towards the pursuit of regime change. The strategy aims to compel Iran to change its policies and European allies to fall in line with the U.S. approach. We evaluate the strategy from the perspective of “coercive bargaining theory”—a pillar of American foreign policy—and find that it lacks key components for success. Namely, it too heavily rely on threats, disregards the role of coercive assurances and incentives, introduces unlimited aims and neglects diplomatic engagement.

In international relations, coercive diplomacy is the art of making threats to affect a target’s decisionmaking. Threats communicate punishments that will follow noncompliance with specific demands. Most people intuit the value of credible threats. Yet, in threatening to dismantle the JCPOA, Trump has forgotten that successful coercion also requires credible assurance that a target’s compliance with demands will result in reciprocal restraint.

As any good diplomat or “dealmaker” knows, and Nobel Laureate Thomas Schelling has famously said, you cannot communicate “stop or I’ll shoot,” without implying that “if you do stop, I won’t shoot.” Trump has made clear that he preferred to rip up the “worst deal ever,” undermining the credibility of any coercive assurance not to abrogate it, even if Iran makes additional concessions. This is just poor coercion. Threats without credible assurance are merely bullying—darned if you do and darned if you don’t—and one should not expect them to succeed.

Assurances are also distinct from incentives or “carrots,” which entice states to strike or abide by diplomatic bargains, and complement coercive bargaining. Trump’s Iran strategy is equally devoid of so called “more for more” offers to build upon the JCPOA with additional incentives.

So often policymakers fail to appreciate the breadth of coercive tools at their disposal. In the case of U.S.-Iran relations, however, the elements of coercive success are staring the Trump administration in the face.

The JCPOA was the product of years of coercive diplomacy with Iran by the P5+1 and European Union. Credible threats were critical, but so were credible assurances and incentives. The threat of continued or increased multilateral sanctions provided significant leverage and the threat of unilateral airstrikes backstopped the negotiations. At the same time, as part of its calculus to adhere to the deal’s strict terms, Iran understood (in part based on the text of the JCPOA) that in exchange for its compliance it was gaining credible assurances. These included the lifting of nuclear-related sanctions and Iran’s perceived reprieve from the looming threat of American (or Israeli) military action against its nuclear facilities so long as the deal held. The incentive of maintaining a civilian enrichment program also played a major role in Iran’s calculations.

The Obama administration seems to have understood the important role of coercive assurances in securing and maintaining Iranian compliance with nuclear constraints. For example, they recognized that just as sanctions required significant international engagement to serve as credible threats, similar efforts were needed to ensure that the assurance of lifting of nuclear-related sanctions was also credible. Such efforts included U.S. officials consistently engaging international banks and businesses to clarify the scope of legitimate business with Iran and explain remaining nonnuclear sanctions. While a host of Iran’s policies continued to deter foreign investment independent of sanctions, these actions demonstrated the credibility of U.S. coercive assurances.

In contrast, the Trump administration has not only ceased communications clarifying the lifting of sanctions, Trump has broadly discouraged any business with Iran and threatened to withdraw from the accord—all despite Iran’s continued verified compliance. These developments have led Iran to accuse the United States of violating specific articles of the deal that refer to good faith efforts to “sustain this JCPOA” and prevent “interference” with the lifting of nuclear-related sanctions. Given such factors, Trump’s new Iran strategy appears to fail the tests of coercive assurance.

The Trump administration has also reintroduced the threat of regime change, including in remarks by Secretary of State Rex Tillerson and Secretary of Defense Jim Mattis publicly expressing a desire to see a “transition” of Iran’s government.

It is unlikely that Tehran truly fears the threat of an Iraq-style ground invasion. Iran perceives that its regional position has strengthened since 2003, along with its ability to deter by engaging in asymmetric warfare. Moreover, rising instability and the perception of American fatigue in the Middle East cast a pall on brute-force options. Nevertheless, statements alluding to regime change unhelpfully exacerbate Iran’s threat perceptions that survival of the regime is at stake. Such boundless intentions foreclose coercive bargaining space and contribute to domestic political constraints in Iran that preclude the leadership from engaging with the West. Moreover, regime change is an unlimited aim—an existential threat—that undermines a coercer’s ability to make credible assurances to secure concessions.

The Strategy is Flawed

According to Trump’s “America First” foreign policy, his administration “will embrace diplomacy” and even work to potentially see “old enemies become friends.” Yet, despite delivering his October 13 Iran strategy remarks in the “Diplomatic Reception Room” at the White House, Trump ironically failed to once mention “diplomacy” or “talks” with Iran; he even failed to negotiate a “better deal.” Despite reports of an isolated attempt, the Trump administration has not indicated that it plans to incorporate hard-won, high-level channels of communication to Iran into its new strategy. Nor are its actions likely to allow space for such engagement. Instead, Trump’s foreign policy and dealmaking philosophy appears centered on threats that await capitulation.

Trump’s strategy appears to be one of brinkmanship—rocking the boat in hopes that the other party is less risk-tolerant and will give in before the boat capsizes. This is dangerous in light of Iran’s potential to “jump ship” with other parties to the JCPOA. Allies have long shared U.S. concerns regarding a range of Iran’s policies, but they have thus far rejected Trump’s approach. Instead they have voiced support for the deal and a balance between pressure and engagement to address remaining problems with Iran. When coupled with no apparent limits to his aims, it is difficult to imagine Iran, or close American allies for that matter, falling in line.

While the sixty-day window to “snap-back” sanctions has closed, many question lie ahead for Congress and the administration. If Trump takes seriously the goal of “fixing” the JCPOA, reining in Iran’s ballistic-missile development or curbing its regional activities and influence, he and Congress would be wise to recognize the importance of maintaining credible assurances, avoiding less-than-credible threats, and offering incentives when appropriate. Absent changes, Trump’s strategy is deeply flawed and is likely to weaken, not strengthen, the coercive bargaining position of the United States going forward.