Why Turkey Went Into Syria 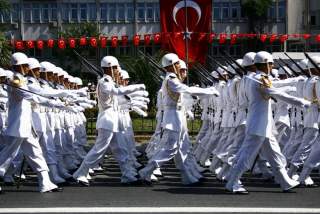 The Turkish military operation symbolizes a new phase in the Syrian Civil War. Turkey has resisted calls for “boots on the ground” since the early phases of the Syrian crisis, which eventually led Ankara to face the twin threats of the PKK’s territorial enlargement in northern Syria and growing ISIS attacks, particularly in Turkish-Syrian border regions. Thus, Ankara has been waiting for an opportune moment to wage a multifunctional operation to stem these twin threats, ensure its border security and empower its position in the Syrian crisis. These basically sum up Turkey’s evolving goals in Syria, which currently prioritize restoring highly fragile domestic security and aspire to an active role at the negotiation table for any post-conflict resettlement in Syria, rather than its initial aspirations to remove Assad and prevail in its geostrategic rivalry with Iran and Russia.

Turkey and coalition forces’ negotiations to establish a ninety-eight-by-forty-five-kilometer “safe zone” between Azaz and Jarabulus, reaching into Syria, have been on the table for a couple of years. But those have failed to bear fruit due to both shifting balances on the ground (i.e., Russian and Iranian interventionism and the United States’ retrenchment) and disagreements about who would deploy land forces, with possible political repercussions in case of casualties.

The Turkish army is known for its caution, and it is no secret that before the July 15 coup attempt, Turkey had major reservations about a cross-border operation in what the secularist establishment calls “the Middle East swamp.” In Syria, the establishment’s first preference was reconciliation with the Assad regime and its allies to avert the risk of an autonomous Kurdish entity in northern Syria, which methodically contradicted government policy. Pro-Western elements in the bureaucracy, on the other hand, seemed ready to approve a joint operation with U.S. forces whereby the Free Syrian Army (FSA) could possibly be equipped to take the lead as land forces, which would in turn require minimal Turkish involvement.

Against the background of close U.S.-Kurdish (PYD) cooperation in Syria and the rising tide of anti-Americanism in Turkish public opinion, the room for large-scale Turkish-U.S. cooperation appeared minimal, especially in the aftermath of the coup attempt. Therefore, Turkey felt it needed to recover ties with anti-Western and activist forces in Syria, namely Russia and Iran, as well as indirectly with the Assad regime. The Turkish-Russian reconciliation in late June, followed by a meeting between presidents Putin and Erdoğan on August 9, was a major recalibration attempt by the Turkish side to reclaim an active role in the Syrian crisis.

With the civilian authority back in control, Turkey began to lay the groundwork for diplomatic fence mending. Thus, the Turkish government not only revamped negotiations with Iran, but also started sending cooperative messages to the Assad regime, possibly signaling a waiver of Turkey’s long-held position favoring Assad’s immediate removal. Currently, the emphasis of Syrian policy is on preserving Syria’s territorial integrity—which opens the door for the continuation of the Assad regime—and eradicating terrorist threats, alluding to a commitment to fight both ISIS and PKK offshoots (i.e., PYD/YPG) in Syria.

The Turkish-led operation follows the PYD’s capture of Manbij from ISIS and its move towards Jarabulus, as well as the recent ISIS attack in the major Turkish border city of Gaziantep, which killed more than fifty civilians. In that sense, it was presented both as self-defense and an implicit red light for the PYD’s aspirations for enlargement along the Afrin-Kobane line.

Given that PYD has reportedly started withdrawing its Kurdish forces from Manbij, Turkey has realized its short-term security goals in Syria. Turkey can now work to establish a safe zone (diplomatically called the “ISIS-free zone”) along the Azaz-Jarabulus line and ensure that a prospective human exodus from Raqqa and Mosul would not put yet another heavy burden on its resources.

Turkey’s charm offensive against both Russia and Iran, as well as its conciliatory messages to the Assad regime (conceding that Assad could stay for the transition period), aim at alleviating the pressures on Turkish domestic security in the short term and isolating the broader geostrategic aims of its Syria policy from immediate measures, to ensure Turkey has a sustainable role. This does not necessarily imply a break from Turkey’s alignment with the United States in Syria, but rather symbolizes a realist turn that takes into account balances on the ground, which compel Turkey to seek accommodation with the anti-Western bloc in Syria.

The Turkish-led operation runs two major risks in a worst-case scenario. First, Turkey has largely refrained from taking the lead in the global war against jihadism, which has consumed the United States’ will and resources in the last decade. Now, Turkey will be on the front lines not only against ISIS but also possibly other Al Qaeda offshoots, which might portend an unending war on terror. Second, Turkey’s military activism dislocates the PYD/PKK’s historical opportunity to be accepted as a legitimate actor in the Syrian-Iraqi theater. This was indeed the defining motive behind Turkey’s Operation Euphrates Shield, which directly sought to mitigate the rising possibility of a Kurdish corridor in northern Syria. Both of these allude to a challenging way ahead for Turkish security order inside and beyond Turkey. The possibility of a Turkish fight against the PYD in Syria and resultant military casualties might turn into a whirlpool for the Turkish government, with immediate spillover effects in Turkish politics. Jihadist attacks might lead to further erosion of political Islam in Turkey, or alternatively would suffocate the AK Party’s raison d’être in Turkish politics, i.e., civilian-populist control of government.

In a best-case scenario, what must follow is a major diplomatic effort to bring together global and regional interests on the table in the form of the continuation of the Geneva processes. Currently, the U.S.-led Western camp seems ready to settle for the Assad regime to endure for a certain period, with a clear timetable for political transition. Russia and Iran might yield to a resettlement that would fulfill their interests, i.e., the continuation of the Assad regime with or without a figurehead. The common goal of removing ISIS, especially from Raqqa and Mosul, might emerge as the common denominator for a political transition, which would need to include the Syrian opposition and the Kurdish groups. Recent attempts to recalibrate Turkish foreign policy point to setting the stage for a broader agreement to alleviate the spillover and, ideally, put an end to the Syrian Civil War.