Why Ukraine Doesn't Get a Say on NATO 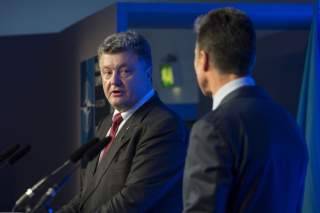 As we approach February 21, the first anniversary of the start of the Ukraine crisis, a question that still seems to vex many observers is: what, exactly, does Mr. Putin want?

Answers vary and usually depend on the ideological predisposition of the respondent. Last week, former U.S. Ambassador to Russia Michael McFaul told PBS’s Gwen Ifill, “I still think Putin gains very concretely to his ultimate objective, which is to weaken and ultimately destroy the government in Kiev. That’s what he really wants to do.”

Neoconservatives and liberal interventionists (by now, surely, a distinction without a difference) also generally believe that Mr. Putin wants to at the very least dominate (economically, culturally, militarily) Ukraine—if not resurrect the Soviet Union—and then move on to reclaim the Baltic states for Russia. After that, with the help of the Kremlin’s vast propaganda apparatus and its nefarious far-right clients in Europe, he will begin to tighten his grip over Hungary, Bulgaria, Greece, Serbia and, should the Le Pen and Farage insurgencies continue to gain momentum, France and the UK.

If this is what Mr. Putin wants—a kind of malign hegemony over large swathes of Eastern, Central and Western Europe—then the West would be well-advised to fight Putin in Ukraine, so it won't have to confront him down the road in, say, Riga or Manchester. The argument is eerily similar to the one (or one of the ones) trotted out by the second Bush administration in the lead-up to Iraq: fight 'em over there, so we don't have to fight ‘em over here. It also is an echo of the ‘60s-era domino theory which led to (among other niceties) our decade-long engagement in Vietnam. An intuitively and viscerally appealing idea, it is also completely and utterly discredited. Yet, it persists. Last week, the Economist’s lede article included this old chestnut:

Only the willfully blind would think his revanchism has been sated. Sooner or later it may encompass the Baltic states—members of both the European Union and NATO, and home to Russian minorities of the kind he pledges to “protect.”

What, then, is Mr. Putin’s real endgame? A nonaligned Ukraine and a measure of autonomy for the breakaway republics; though, I see no reason for the West to consent to the latter if it, as it should, agrees to the former.

Don’t the Ukrainians have a voice as to whom they wish to align with? The answer is no. They have forfeited their agency in this matter.

Let’s review; for twenty-five years, Ukraine has proved incapable of governing itself. Sitting astride Europe as a transit point for Russian natural gas, it has allocated its rents as unwisely as possible. The Orange Revolution brought forth a government every bit as corrupt as its predecessors. In 2010, the Ukrainian people voted for a pro-Russian easterner, Viktor Yanukovych. Four years later (and one year ahead of a scheduled presidential election), he was overthrown. (Any doubters as to which side started the shooting on the Maidan would be well-advised to read the BBC’s recent report on the matter.) The current government has, according to organizations that could hardly be described as Kremlin friendly (Human Rights Watch, Amnesty International, the Organization for Security and Cooperation in Europe), committed war crimes in its attempt to defeat the Russian-backed separatists in the Donbas.

Further, the critics have it backwards: NATO’s principal consideration should not be whether NATO will make Ukraine more secure, but whether Ukraine will make NATO more secure. The answer is self-evident. It is the alliance that has the first and last word on who is allowed to join. So, no, despite the endless protestations from the State Department, Ukraine doesn't get a voice as to whether it gets to join NATO.

But the critics will cry: this is an echo of 18-19th century great-power politics! Yes, I suppose it is. And it is far preferable to the 21st-century alternative of naively stirring up revolutions the world over without any heed to the consequences, which, let us not forget, lead to the deaths of thousands of innocent people.