Why the U.S. Army (of the 1800s) Would Understand China's South China Sea Strategy 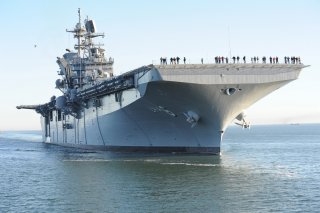 This week I had a lively back-and-forth with a Southeast Asian friend about Communist China’s latest antics in the South China Sea. To wit, imagery shows that the People’s Liberation Army (PLA) has taken to deploying surveillance and anti-submarine aircraft to China’s island bases in the region along with transport helicopters. My friend, an army officer, claimed not to fully grasp why China does what it does in the South China Sea because its efforts transpire at sea, not on land. He attributed his puzzlement to the disparate worldviews that animate mariners and soldiery. The sea is a foreign country, it seems—utterly alien to practitioners of ground warfare.

There is no denying that seaborne strategy differs from strategy on dry land. But it misleads to conceive of earth and saltwater as domains radically apart. As historian Captain Alfred Thayer Mahan teaches, the sea resembles a trackless plain. It’s tough to establish a fixed presence throughout such empty vastness. One of Mahan’s successors at the Naval War College, Admiral J. C. Wylie, explains why. The goal of military strategy, opines Wylie, is to exert effective control of someplace or some object on land. Air and sea power are supporting arms for efforts to emplace a “man on the scene with a gun”—in other words, soldiers bearing potent firepower—where it matters.

Afterward, the military and political authorities can dictate what happens on that scene because they outgun rivals who might dispute their control. Superior firepower: that’s a working definition of sovereignty. As international lawyers will tell you, a sovereign commands a near-monopoly of force within the territory it claims. Thus its will prevails within national borders as expressed in laws, regulations, or other official mandates.

Enforcing sovereignty, though, is a taxing prospect for those charged with doing the enforcing. Indeed, how an army (or police force) can control a farflung ungoverned space on land ranks among the foremost dilemmas for strategists. Commanders could scatter troop contingents all over the place in an effort to impose superior firepower everywhere, all the time. That seems to make sense. But since the biggest armed forces are finite in size and manpower, dispersing packets of forces all over the map thins out the armed might available at any one place. A detachment might find itself overwhelmed by an antagonist that remains inferior on the whole but masses a sizable fraction—if not all—of its strength for battle.

Alternatively, ground forces can build fortified strongholds in the badlands and dispatch strong patrols from there. Thus deployed, individual units would enjoy superior combat power and endear themselves to the writers who make up strategic canon. Mahan, Carl von Clausewitz, and kindred masters of strategy entreat practitioners to keep their forces together to the maximum extent possible—combining their firepower into a heavy-hitting fist. The U.S. Army assumed such a posture during the nineteenth century, when the United States was expanding westward to the Pacific and faced resistance from Indian nations trying to defend their sovereignty against aggressive settlers and soldiers swarming from the east.

With territory to police on a continental scale, especially in the Great Plains and the southwestern desert, soldiers constructed forts and conducted sweeps from there, both for surveillance purposes and to subdue Native American bands they encountered. Army contingents generally outmatched their foes. The tradeoff: they only had sufficient numbers to maintain an intermittent presence in the backcountry. Operations took on a fitful, come-and-go character. Oftentimes army troops would prevail in a tactical engagement and then move on—ceding ground back to their opponents. They won battles but forfeited control, as Wylie might put it.

There are permutations to these methods for arranging forces on the map. During the Vietnam War, for instance, the U.S. Marine Corps experimented with stationing “Combined Action Platoons” in South Vietnamese villages and backing them up with heavy mobile forces that could surge to points of impact. Marines and their Vietnamese allies fought off Vietcong insurgents, denying the insurgents supplies and access to the populace. Mobile units roamed the countryside, on call in case a platoon was in danger of being overrun. At the same time the U.S. expeditionary force operated large fortified bases, supplying mobile formations a refuge before they ventured into action or after they returned from the field.

The basic dilemma before ground commanders appears eternal despite all these variations on a theme: how to balance between dispersing combat power to cover more ground and concentrating power should a major action loom. The necessity for scouting compounds the dilemma. Commanders must find out what is happening in their operating zone so they know whither to send forces to make contact with an adversary. It’s hard to keep an eye on everything that’s happening across large geographic spaces—and thus find the scenes where Wylie’s gunmen are needed.

How does this relate to the sea? Well, again, the open ocean is a featureless plain where ships can maneuver with impunity. But landmasses adjoin that plain. Islands dot the open ocean. Land meets sea around the margins of continents. Such landmasses are candidates to host outposts for patrolling nautical space. Forward bases in the Spratly or Paracel Islands are China’s counterparts to U.S. Army forts on the frontier. Without bases, it would prove hard for the PLA Navy, the China Coast Guard, or the maritime militia—the three main arms of Chinese sea power—to maintain the constant presence throughout the South China Sea that they must maintain to enforce Beijing’s claims to “indisputable sovereignty” over that expanse and its land features.

Without a monopoly of force over rival contestants—the Philippines, Vietnam, or most recently Malaysia—China’s sovereignty will remain in dispute.

In a sense, then, the PLA finds itself wearing the U.S. Army’s boots from Wild West days of yore. It is trying to wrest sovereign control from neighbors by imposing a monopoly of force. The maritime environment in the South China Sea nudges the PLA toward a strategy relying on island fastnesses. Ships and aircraft can range out across the sea from bases atop artificial islands in the Spratly or Paracel archipelagoes, hunting for navies or coast guards that defy Beijing’s wishes. These are Communist China’s counterparts to forts dispatching army scouts. Warships, coast-guard cutters, fishing vessels, aircraft—these are conveyances that cannot loiter everywhere, forever. But if positioned at key points on the nautical chart they can make regular sweeps, vector in heavy forces to trouble spots, and in the process help the PLA approximate the geographic coverage at sea that an army or police force achieves on land. They can approach Admiral Wylie’s ideal of the man on the scene with a gun—even at sea.

So the aircraft that puzzle my friend are scouts, part of the long arm of Chinese sovereignty in embattled waters. They gather the information that helps senior officers direct combat power to where it is needed. The more often they deploy to island bases, and the more they do so in significant numbers, the better the PLA’s chances of imposing stifling coverage in seaways Beijing considers its own. And the more Chinese sovereignty will become reality rather than aspiration. QED.

In the coming years, the China problem will only worsen for Southeast Asian coastal states that insist on their rights to maritime jurisdiction and undersea resources. As propulsion technology advances, for instance, it may become possible for unmanned ships or aircraft to linger on station virtually forever. Boundless seaborne or airborne endurance would grant PLA commanders a surveillance capability U.S. Army commanders could have barely imagined in the American West. The network will become even more formidable if PLA weapons engineers arm unmanned craft in large numbers, letting them act not only as eyes in the sky but as firing platforms in their own right.

Wylie would have to amend his metaphor were he among the quick today. We appear to be entering an age when armed forces no longer need to deploy soldiers with guns under all circumstances. Human overseers might come to use remotely piloted or autonomous gunmen to exert their will. If so, unmanned technologies would have distanced people from the fight at the same time they helped solidify control of embattled space.

So it seems practitioners of high-seas strategy have much to learn from ground warfare after all. And ground-pounders’ teachings disturb as much as they enlighten.

Southeast Asians—and lovers of freedom of the sea everywhere—must come to terms with China’s bid for sovereignty. They must act, making common cause with likeminded partners and fashioning counterstrategies to meet Beijing’s high-plains offensive. Otherwise the region courts an American Indian fate.

James Holmes is J. C. Wylie Chair of Maritime Strategy at the Naval War College and the coauthor of Red Star over the Pacific. The views voiced here are his alone.