Why U.S. Army Bases Should Be Stripped of Statues With Confederate Roots 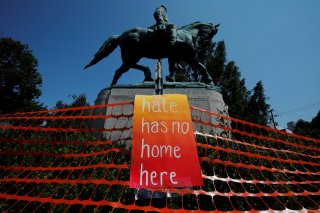 Retired Army Lt. Col. Paul Yingling was famous once, at least in the military. Back in 2007, Yingling, who served as an active-duty officer with the U.S. 3rd Armored Cavalry Regiment, penned an article for the Armed Forces Journal that arrived with all the subtlety of the shells he’d once fired from his regiment's tanks. Describing the war in Iraq as a “debacle,” Yingling blamed the military's senior leadership for America's military failures in the Middle East. His assessment was blunt, painful and controversial: “America’s generals have failed to prepare our armed forces for war and advise civilian authorities on the application of force to achieve the aims of policy,” Yingling wrote.

“A failure of generalship” made national headlines and spurred a predictable response from Yingling’s superiors—many of whom quietly signaled to Yingling that his military career was over. As Yingling later described it, there was “absolute silence from the top.” But in the Pentagon’s E-Ring, where the U.S. military plans America’s wars, Yingling’s article was passed hand-to-hand, talked about and debated—ceaselessly. And over the years, the charge sheet detailed in the Armed Forces Journal article has not only begun to take hold, a chorus of senior military officers regularly defend Yingling's views. Meanwhile, Yingling himself retired to teach high school social studies and coach youth baseball in Colorado.

Now, Yingling is at it again. In an article that appeared in the June 9 issue of Defense One, Yingling and two retired U.S. Army officers (John Nagl, a celebrated retired Army lieutenant colonel and Mike Jason, a well-known retired combat colonel) urged the Army leadership, and specifically Army Secretary Ryan McCarthy, to rename U.S. military bases—substituting celebrated combat leaders and soldiers for "the names of Confederate officers who took up arms against the United States." Yingling and his colleagues identified ten army bases they believe should be renamed (Forts Benning, Bragg, Hood, Lee, Polk, Gordon, Pickett, A. P. Hill, and Rucker—as well as Camp Beauregard), while recommending suitable substitutes: from Sergeant First Class Alwyn Cashe of Thompson, Georgia to Sergeant Henry Johnson, a Medal of Honor recipient from North Carolina.

Speaking from his home in Colorado, Yingling laid out the reasons behind his team’s recommendations. “We identified three criteria,” Yingling told me in an extensive telephone interview. “The person had to be in the home area of the base, had to be a person of color, and had to be a junior or enlisted officer.” When I offered that perhaps it might be appropriate to honor Gen. James Longstreet, a southern officer who broke with the Lost Cause and actually commanded an integrated militia during Reconstruction (resulting in his branding as a “scalawag”—a turncoat, by his former Confederate commanders), Yingling sighed. “Can’t do that,” he said. “And for a very simple reason. He was a Confederate.”

The Defense One article did not have the explosive power of Yingling’s 2007 Iraq essay, but its impact was immediate. The Yingling-Nagl-Jason proposal circulated in the upper echelons of the military, whose senior officers largely endorsed its recommendation. “This move is long overdue,” a senior retired military officer told me within hours of the article’s publication, adding that many in the military had been thinking along the same lines—some of them for many years. Predictably, however, Trump opposed the move, in a tweet-powered condemnation aimed at solidifying his standing with his base, while tying him to the uncertain history of a generation of confederate generals who have seen their names emblazoned on Army bases from Virginia to Texas. “These Monumental and very Powerful Bases have become part of a Great American Heritage, and a . . . history of Winning, Victory, and Freedom,” Trump tweeted. “The United States of America trained and deployed our Heroes on these Hallowed Grounds, and won two World Wars. Therefore, my administration will not even consider the renaming of these Magnificent and Fabled Military Installations.”

Of course, though this should go without saying, Trump had it wrong. The Confederates for whom the Army bases are named are not only not heroes (except perhaps in some areas of the Old Confederacy), they do not present a “history of Winning, Victory and Freedom.” And never have. A handful of examples will suffice: Fort A. P. Hill is named for Virginian Ambrose Powell Hill, a Corps Commander in Robert E. Lee’s Army of Northern Virginia, who was killed by Yankee gunners at the Battle of Petersburg. The problem with Hill, who sported a red “battle shirt” in combat, was that he was sick, and absent, during most of Lee's major engagements—suffering, it is said, from syphilis. At Gettysburg, when Lee needed him most, he was rarely found. Then there’s the famed George Pickett, who commanded Lee’s charge at Gettysburg, only to be dismissed by Lee himself in the war’s last days, when Pickett’s division was overwhelmed at the Battle of Five Forks. Pickett himself was behind the lines with his buddies, enjoying a “shad bake.” Lee was enraged. On the eve of Appomattox, Lee spotted him nearby: “Is that man still with this army?” he asked. Finally, there is General Braxton Bragg, for whom North Carolina’s Fort Bragg is named. Bragg is arguably one of the worst commanders in American military history (Grant’s army humiliated him at Chattanooga) and was loathed by his subordinates, who plotted endlessly to replace him. After Chattanooga, Jefferson Davis, who might have been his only friend, relieved him, made him his military assistant—and regularly ignored his advice.

Nor should we forget several others, better battlefield commanders than Hill, Pickett or Bragg, though of suspect morals and political beliefs: John Brown Gordon became Governor of George after the Civil War—and reputed head of the state's Ku Klux Klan, while Brigadier General Henry Benning, an ardent secessionist and racist (the “white race” he told the Virginia legislature, is “superior in every respect”), went on to become a respected lawyer in Columbus, Georgia. The Benning family, it is said, became the model for the O’Hara’s in Margaret Mitchell’s Gone With The Wind. The regularly occurring and predictable question is not why these men’s names should be replaced by the names of those who are true heroes, but why they were so honored in the first place. Yingling provides an answer, pointing out that many of the bases were named in the thirty-year period from 1890 to 1920 when the myth of the Lost Cause was at its height—and the United Daughters of the Confederacy were a formidable lobbying organization. “The army was not strategic about their culture at the time,” he notes, “but southerners were. They were well-organized, outspoken.” Yingling points to the U.S. Air Force as a model of how bases should be named. “If you visit Edwards Air Force Base,” he says, “you will notice that all of the streets are named for fighter pilots who lost their lives in their service. It's exactly right, a reminder of the sacrifice that Air Force pilots made. It's deeply affecting, and very sobering.”

The Yingling-Nagl-Jason proposal has gained support inside the U.S. military, and in Congress, despite President Donald Trump’s opposition. Army Secretary Ryan McCarthy has said that he is open to considering renaming those bases named for Confederates, while a Pentagon spokesperson has said that Secretary of Defense Mark Esper “supports the discussion.” The announcement reverses the Army’s traditional position on the issue. And in the wake of the Defense One article, the Senate Arms Services Committee adopted Sen. Elizabeth Warren’s (D-Mass.) amendment to the National Defense Authorization Act which would force the Pentagon to remove the names of monuments and paraphernalia honoring the Confederacy from military bases over the next three years. “This issue is already decided,” the senior retired military commander with whom I spoke says. “It is a non-debate.”

If there is a last stand here, then this former senior military officer notes, it is likely to be over the renaming of Fort Lee in Virginia. It is at least notionally true that Robert E. Lee stands alone, for unlike Gordon or Benning, the celebrated southern commander remained nearly silent in the wake of his defeat, counseling his fellow commanders to accept the verdict of the war. The issue over which the debate had raged, he believed, had been decided on the battlefield—and Lee accepted the verdict in silence. Then too, and inarguably, Lee was an innovative, brilliant and tenacious enemy commander whose legendary campaigns are studied and restudied. But then there’s this: would you have sent 12,500 of the cream of your army for nearly a mile across an open field and into the teeth of the most formidable array of artillery ever deployed in North America?

Mark Perry is the author of Conceived In Liberty: Joshua Chamberlain, William Oates, and the American Civil War and nine other books. You can follow him on Twitter @markperrydc.