Why the U.S.-China Strategic Rivalry Has Intensified 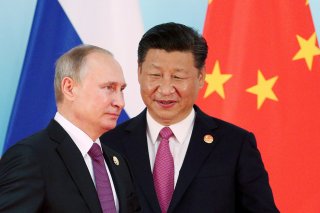 The outcome of the U.S.-China meeting in Anchorage on March 18–19, which amounted to little more than a mutual airing of grievances and staking out of battle lines, could easily have been predicted based on the way both sides framed the meeting in advance.  On the day before, China’s official news service published a commentary saying the “arrival of the long-awaited official dialogue” was an opportunity for Beijing and Washington to “build strategic trust, avoid strategic miscalculation, and manage differences.”  The two sides “need to return to normal engagement at all levels.” But the commentary added that this would require Washington to “be more pragmatic” and discard its “deep-rooted prejudices against China.” Reinforcing the latter point, an editorial in a Chinese Communist Party newspaper said “the Chinese public has little expectation that this dialogue can achieve any substantive results” because of “a series of offensive words and deeds” by the United States and the possibility that the meeting would only be “a stage for the US to put unilateral pressure on China.” In anticipation of such pressure, both articles emphasized Beijing’s firm position on sovereignty issues—especially Taiwan, Hong Kong, and Xinjiang—and its rejection of U.S. interference in Beijing’s internal affairs.

For its part, the White House previewed the meeting in a briefing session for journalists that was clearly aimed at similarly lowering expectations. The Anchorage sessions would be “a one-off meeting” rather than the “beginning of a dialogue process.” It would be just an “initial discussion to understand one another’s interests” and priorities, with no expectation of “specific negotiated deliverables.” But the White House also promised a firm U.S. approach:  “we’re going to lay down some specific areas where we believe that Beijing [needs] to take some steps to change course” and “be very, very blunt with their principals about the long list of [US] concerns” about Chinese behavior.  One of the White House briefers added:  “if we happen to have some serious disagreements in Anchorage, I’m not very confident that we’re going to be able to persuade the Chinese of the error of their ways and the righteousness of ours just over the course of a couple of hours’ worth of talks.”

As is now known, that is precisely how it played out, at least during the opening public session of the meeting.  During his opening statement, Secretary of State Antony Blinken highlighted Washington’s “deep concerns with actions by China, including in Xinjiang, Hong Kong, Taiwan, cyber attacks on the United States, and economic coercion toward our allies” that “threaten the rules-based order that maintains global stability.” National Security Adviser Jake Sullivan emphasized that these concerns and China’s “assaults on basic values” are “on the minds of the American people” but have also been voiced by U.S. allies and partners and “the broader international community.”

China’s top diplomat Yang Jiechi, responding on the grounds that such harsh messages should have been reserved for the private sessions (a view shared by some experienced US diplomats), delivered a much longer opening statement that mentioned a desire for “sincere and candid” talks but was mostly an invective rejoinder to the presentations by Blinken and Sullivan.  Yang criticized what he deemed Washington’s imposition on other countries of “the so-called ‘rules-based’ international order”; the manifest flaws of American democracy; U.S. international behavior that brings “turmoil and instability” to the world; and Washington’s “Cold War mentality and zero-sum game approach.” His colleague, Chinese State Councilor Wang Yi, added that “unwarranted accusations from the US side” have undermined “China’s legitimate rights and interests” and are responsible for the “period of unprecedented difficulty” in U.S.-China relations.

Given this prelude, it is not surprising that the subsequent private sessions apparently yielded little of substance. China’s official news service described the talks as “timely, helpful, candid, and constructive,” and said Beijing is “ready to work with the United States to enhance strategic communication [and] advance mutually beneficial cooperation.” But it also repeated Wang’s reference to Washington’s “irrational suppression of China’s legitimate rights and interests,” and reiterated Beijing’s principled positions on all the issues that were reportedly addressed in Anchorage. Blinken told the press that “we knew going in that there are a number of areas where we are fundamentally at odds” and that “it’s no surprise that when we raised those issues clearly and directly, we got a defensive response.”  But he added that the two sides had “a very candid conversation” on a wide range of bilateral and global issues. The two sides reportedly agreed to establish a joint working group on climate change and to discuss some reciprocal arrangements for working-level diplomats and journalists.  These are important and constructive steps, but a meager output.

It would be easy to dismiss the speeches on both sides in Anchorage as the players’ performing for their respective domestic audiences. Indeed, the U.S. side issued a statement accusing the Chinese delegation of “grandstanding, focused on public theatrics and dramatics over substance.” But Blinken’s instruction for the press corps to stay in the room for his response to Yang shows that both sides were highly attentive to appearances. In any case, the substance of their remarks cannot be dismissed as mere posturing for folks back home.  Both pairs of diplomats were also speaking on behalf of their governments to a global audience, so their remarks must be taken seriously and analyzed as such.

Several aspects of the exchange in Anchorage suggest that the potential for improvement in U.S.-China relations that many observers thought possible and even hoped for after the departure of the Trump administration is unlikely to emerge anytime soon. On the contrary, the tenor and substance of the meeting in Anchorage suggest that the relationship is only getting more adversarial and mutual understanding more elusive. Much of this is a product of Beijing’s and Washington’s diverging views on the balance of power between the two countries.  The “Interim National Security Strategic Guidance” issued by the Biden Administration earlier this month said “we will engage China from a position of confidence and strength.” During the White House press briefing before the Anchorage meeting, one of the officials reflected this by saying Washington has “an increasingly strong hand to come to the table with our Chinese interlocutors.”  And Blinken reinforced this directly at the meeting when he noted that then-Vice President Joe Biden said to then-Vice President Xi Jinping in 2011 that “it’s never a good bet to bet against America.”

Chinese leaders, however, are not prepared to wholly accept this premise. The editorial (mentioned earlier) in the Chinese Communist Party newspaper on the eve of the Anchorage meeting said “it is important to point out that the US has seriously overestimated the matching degree between its national power and its strategic fantasy of containing China.”  Yang explicitly echoed this message in Anchorage.  “Let me say here that, in front of the Chinese side, the United States does not have the qualification to say that it wants to speak to China from a position of strength,” Yang said.

Beijing may well underestimate relative U.S. power as of 2021 but Washington may nonetheless be at risk of overestimating it.  This is a crucially important variable in terms of the way that the two sides calculate their leverage and deterrence in competing against each other and pressing their respective agendas in the bilateral relationship. The exchange in Anchorage suggests that Washington judges that it can set the terms and largely disregard Chinese arguments and concerns, whereas Beijing judges that it not only can but must push back against such U.S. presumptions.

This is also highly relevant to the Biden Administration’s emphasis on the importance of coordinating with U.S. allies and partners in dealing with China.  The Interim National Security Strategic Guidance asserts that the United States “will rally our allies and partners to join us, pooling our negotiating leverage and showing our collective power and resolve” in confronting Beijing.  This was clearly one of the intended messages to China of Blinken’s visits to South Korea and Japan just before the Anchorage meeting; and both he and Sullivan invoked the allies as implicit signatories to the messages they were delivering to Yang and Wang. But the Chinese diplomats pushed back here as well, noting that Beijing has its own relationships with the other countries in the region—emphasizing their economic interdependence with China and questioning whether Washington can reliably speak for them.   Wang said “they each have their own set of issues and different positions are involved,” and Yang said simply that the United States and China “should have many mutual friends.”  Again, Beijing is probably underestimating the strength of the U.S. alliance network, but the United States may nonetheless be at risk of overestimating the extent to which its allies agree on the efficacy of a confrontational approach to Beijing.

Clearly, the United States and China are engaged in an escalating contest of strength and will, with each side calculating that it has both more strength and more will than the other side is willing to attribute to it.  The Anchorage meetings demonstrated how hard it will be for Beijing and Washington to forge any kind of mutual understanding, much less the kind of mutual accommodation that will almost certainly be necessary for the relationship to return to a constructive and non-adversarial path, under these circumstances.