Why a U.S.-India Partnership Must Succeed 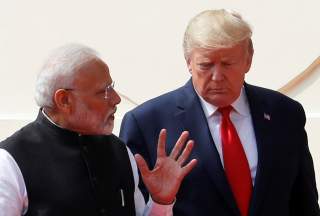 The strategic momentum in the U.S.-India relationship has been a long time in the making. Now is the time for both sides to think big.

President Donald Trump’s visit to India is the latest in a tradition of summits between U.S. presidents and Indian prime ministers. Dwight D. Eisenhower had a personal fascination with the subcontinent and always wished to travel there, becoming the first U.S. president to do so. John F. Kennedy, who hosted Jawaharlal Nehru in America, believed that India would be the key to unlocking the potential of U.S. relations with the emerging world. Kennedy dreamed that India could be a treasured American partner in the fight against Communist totalitarianism.

However, the meetings between twentieth-century American and Indian leaders were overshadowed by ruined hopes and frustrated ambitions. India’s policy of nonalignment, its need to balance its relations with Russia and China against the overtures of America, and its desire to chart its own course post-Independence, all forestalled America’s aspirations for the relationship. Close U.S.-Pakistan relations also created a barrier for engagement with New Delhi.

This time, Trump finds himself on ground that was carefully prepared by post–Cold War administrations. He will arrive in India to find not the frostiness and frustration of last century’s relations but the prospect of building the most important partnership of this century.

Building the U.S.-India relationship is a strategic necessity for both nations. Both India and America face the economic and military rise of an unreformed, totalitarian China and the ambitions that its leaders hold for a new world order with China at its center.

America faces the prospect of the defeat and destruction of the U.S.-led order at the hands of the Chinese Communist Party. What was once called the “free world” or the Pax Americana is today called the “rules-based order,” an international system in which free nations are the ultimate arbiters of power. China’s leaders mean to end this system and to bring the American-era to a close.

India faces the prospect of overwhelming Chinese power on its Himalayan borders and throughout the Indian Ocean region where India should be a natural defender of global trade, security, and prosperity. The flood of Chinese companies, technology, and capital into the lands and continents marked out by the “Belt and Road Initiative” threatens to strangle India’s own economic ascendancy, leaving a Chinese Raj in the Indo-Pacific region where the British once held sway. With China’s dominance in the Indo-Pacific region, India’s rise as a free and independent world power, in control of its national destiny, would be severely challenged.

India and America must come together to build and lead a twenty-first-century coalition of developed and developing nations that can counter China’s goals of dominance. In order to do this, the U.S.-India relationship must evolve even further. Great gains have been made on military cooperation and national security. The relationship must now focus on trade, technology, and commerce. This can create an economic beacon for other democracies and emerging nations that will be pressed to make hard choices by America and China.

The global economy needs a new growth center in order to create alternatives to an ascending authoritarian China. A fully realized U.S.-India economic relationship would create a new center of gravity in the global economy where innovation, growth, and business can thrive while also safeguarding and strengthening democratic values and security among democratic nations.

As the problems of doing business in China continue to take their toll on American corporations, from intellectual property theft to rising labor costs, India presents an important alternative. India offers the prospect of growth and opportunity without sacrificing U.S. national security interests. For India, deeper economic engagement with the United States offers a shot in the arm for economic growth, manufacturing, development, and innovation, all of which will be necessary to realize India’s ambitions as an emerging world power.

If the United States and India are able to build a dynamic economic partnership, then the result will be a counterweight to China and a rallying point that can reinvigorate the democratic world. Today, the United States struggles to engage European Allies on the problem of China. America struggles equally to influence emerging nations in Asia that are increasingly reliant on trade and finance from China. India faces the possibility of a full economic and military eclipse in its own region if China’s Communist Party realizes its ambitions.

A vigorous U.S.-India partnership, based on commercial and security ties, can enable democracies and emerging economies to make a hard but necessary choice: do we turn to China for economic opportunity or can we find that dynamism amongst each other? This may be the question on which the future of the free world turns. India and America can provide the answer by working together.

Dr. Jonathan D. T. Ward is the author of China’s Vision of Victory and Founder of Atlas Organization (Washington DC). Dr. Jagannath Panda is a fellow and heads the East Asia Center at Manohar Parrikar Institute for Defence Studies and Analyses (New Delhi). Both are specialists in Chinese strategy.