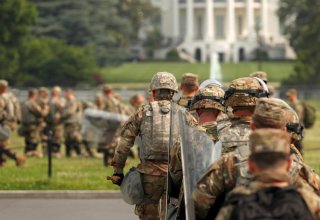 Back in the summer of 2016⁠—when Donald Trump was still a citizen⁠—the New York real estate mogul and presidential candidate promised voters that, once he was in the White House, he would build the strongest and most lethal military in American history. There was nothing surprising in this, as most candidates for the presidency regularly make such promises no matter what their political party. But what was surprising was that at the same time that Trump was flexing his patriotic muscles and unabashedly courting the military vote, he was also disparaging the very institution he said he would rebuild.

During his campaign, Trump criticized war hero John McCain. “I like people who weren’t captured,” he said. He promised that he would fire most of the military’s senior officers and replace them with Trump partisans. He implied that U.S. combat commanders were stupid when he said, “I know more about ISIS than the Generals do.” He claimed that Barack Obama had gutted the military’s upper ranks and had reduced them “to rubble”, slammed retired officers who failed to support his candidacy, even calling retired U.S. Marine Gen. John Allen a “failed General,” and suggested that U.S. soldiers had pocketed cash intended for civilians at the height of the Iraq war. “I think they’re living well right now, whoever they may be,” he stated. Trump also waved off the impact of explosive devices on troops in combat, noting that “they go for a little ride upward, and then come down.” He even mocked a family whose son was killed in the Iraq War.

The military noted these insults and repaid Trump in kind by overwhelmingly voting for him in the 2016 election, where Trump outpolled Clinton among those in uniform by a two-to-one margin.

In fact, the military’s support for Trump wasn’t surprising, and most especially to those in the military’s most senior ranks. “The military is a conservative organization, and that’s especially true among enlisted personnel,” retired Col. Kevin Benson, the former director of the Army’s prestigious School of Advanced Military Studies, told me during a lengthy telephone interview in the wake of the election. “So it stands to reason that Trump would appeal to them. In many ways, I think, he speaks their language.” Nor is it a shock, as Benson now concludes, that Trump retains the popularity that he enjoyed nearly four years ago. “He’s done some controversial things, for sure,” Benson told me recently. “But, and in spite of that, he’s still viewed as pro-military by those in uniform. He’s aware of that view, and he cultivates it.”

While Trump’s support among servicemen and women has slipped since his election, according to a December poll conducted by the Military Times, which featured the news with an eye-popping headline: Troops’ Opinion of Trump Heads Down. Still, he is more popular now than when Barack Obama was when he left office. And while these numbers are dated and may be revised in light of the urban turmoil spurred by the George Floyd incident in Minneapolis, there is no reason to believe that they’ve changed significantly over the last six months. In fact, Trump’s numbers among the military have remained remarkably consistent during his four-year presidency, despite the recent slippage. The military consistently and historically has supported Trump in greater numbers than those of the general population, where Trump’s popularity has taken a nosedive. Which is to note that Trump not only retains his core support among conservative and Republican service members⁠—who outnumber self-described liberals and Democrats, among those in uniform, by a wide margin⁠—it appears that the voting public is far more upset with the way that Trump treats the military than the military itself. “I suppose that it’s a sign of just how conservative we are as an institution,” a senior military officer noted. “In my view, Trump’s presidency hasn’t been particularly good for the military but that’s a minority view. Apparently, when Obama reduces the military to rubble it’s an outrage but when Trump does it it’s perfectly OK.”

That is why there’s a growing sense among senior military officers that Trump’s sustained support among those in uniform has little to do either with either the military’s inherent conservatism or its geographic roots. Instead, Trump’s support from those in uniform has more to do with the growing unease of service members (and particularly those in the enlisted ranks) with America’s endless conflicts in Afghanistan, Iraq and Syria, which Trump has vowed to end. That pledge, military officers say, is why Trump remains popular. “I don’t know how you quantify this and I won’t try to,” as the senior military officer with whom I spoke explained to me recently, “but the continuing support for Trump in the ranks is based on the view that, while he’s a braggart and a blowhard who doesn’t know the first thing about the military, he’ll at least get us out of these wars. And that matters. Frankly, those who have been through these serial deployments to the Middle East support him the most, because they’ve seen these wars up close. His message that we need to get out has a lot of appeal.”

But while that view might seem notionally true, it’s also counterintuitive. For while Trump’s core support inside the military has recently wavered, if ever so slightly, he has recently weathered a number of Pentagon controversies that have placed him at odds with the nation’s most senior military leaders. Included in this is his replacement of Secretary of Defense James Mattis (a retired Marine general and arguably the most popular military commander of recent history), and his characterization of senior military officers as “losers” who “don’t know how to win anymore,” which was a comment that took place in “the tank”⁠—the sacrosanct meeting room of the Joint Chiefs of Staff. Additionally, he abandoned America’s Kurdish allies in Syria upset the U.S. special operations community, and criticized Adm. William McRaven, who was head of the U.S. Special Operations Command when Osama bin Laden was killed. “We should have captured him long before we did,” Trump sniffed. He also pardoned a controversial and widely disliked Navy Seal accused of murder,  and, most recently, expressed support for the dismissal of Captain Brett Crozier, whose letter to Navy leaders pleading for help was applauded by sailors aboard the USS Theodore Roosevelt but scorned by Trump. “I thought it was terrible what he did,” Trump said. “To write a letter? This isn’t a class on literature.”

That there is deep unease in the U.S. military with America’s continued deployments in the Middle East is not in doubt. But the current runs much deeper among the rank and file than it does with senior officers, a civilian Pentagon official notes. The unease is also more prominent in the U.S. Army and Marine Corps than in the Air Force or Navy, whose personnel are less likely to have served in the line of fire. The military is also uneasy with Trump’s recent call that it be deployed to aid local police forces to calm disturbances resulting from the death of George Floyd at the hands of Minneapolis police. The Pentagon has been “slow-walking” the request, which would involve deploying the military police to select urban areas, a senior Pentagon civilian says. “There isn’t much support for this idea in the building,” this senior official says, “so everyone is dragging their feet. And that includes [DoD Secretary Mark] Esper.”

But continued U.S. deployments to the Middle East remain the most controversial issue for the military, and most especially for its enlisted personnel, most of whom support Trump’s withdrawal proposals. While support for this view cannot be quantified, data released last January by the Center for Responsive Politics is suggestive of military views. According to the CRP, during the recently concluded presidential primary season, Bernie Sanders received more donations (to the tune of $185,000, from active duty service personnel), than any other candidate, including Donald Trump⁠—a counter to the view of the military as a conservative, or staid institution. But the data is also suggestive of a much deeper trend, as one reporter noted: “The simplest explanation for the flow of military donations to Sanders would be his unstinting opposition to [the] disastrous foreign war that have killed nearly seven thousand troops and left tens of thousands more maimed, burned, or psychologically scarred.”

While steadfastly refusing to offer a judgment on the military’s views on Trump (or Sanders), retired U.S. Marine Corps Col. Mark Cancian, a senior adviser with the Center for Strategic and International Studies, has acknowledged the discomfort the military has for America’s continued foreign deployments. “I don’t think there’s much doubt about that,” he said, “which also, by the way, reflects the views of the majority of the American people.” But while admitting that military personnel are largely conservative, Cancian adds this restrained judgment: “I think it’s a mistake to characterize the military as Democrat or Republican, or pro-Trump or anti-Trump,” he said. “This is a very diverse institution. There are 1.4 million people in uniform. So that Bernie Sanders would have military donors is not exactly surprising, though if you take a look at the actual numbers of donors I think that you’d find that his support is fairly modest.”