Why U.S. Policy in the Middle East Will Continue to Fail 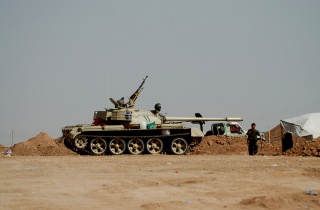 Few things are guaranteed in life, but the prospect of failure in American foreign policy in the Middle East right now is as close as it gets. The United States’ policies and plans regarding the fight against Islamic State in Mosul, Raqqa, Aleppo and Sirte offer graphic evidence why.

Shortly after the beginning of the civil war in Syria, the major cities of Aleppo and Raqqa came under siege by a host of competing forces and militias, including Islamic State. In 2014, ISIS militants captured the Iraqi city of Mosul, and last year they established a foothold in the Libyan city of Sirte. All four cities are under full or partial control of ISIS today.

The United States is actively involved militarily in trying to destroy ISIS in each location. The strategy Washington employs in those attempts is consistent with how it conducts foreign policy across the region, and exemplifies why that policy has failed—and why it will most likely continue to fail.

The U.S. military is engaging ISIS in or near each of the four cities using a combination of air strikes, drone attacks and Special Operations forces. The intent of each of these operations is to aid local forces, friendly to the United States, to defeat ISIS. The results, however, have been to continue the fighting, helping to prevent Washington’s chosen rebels or militaries from losing—but insufficient, given the militants’ limitations in capability, to prove decisive for any to win.

One of the reasons is that in no case are there merely two sides, no situation involving the “good guys” against the “bad guys.” Instead, each of the four cities has a sordid, unstable and unreliable list of competing elements, many of which change allegiances when they deem it tactically expedient. Identifying U.S. interests is even murkier.

Raqqa and Aleppo in Syria are being contested by literally dozens of rebel groups, defended by the Assad regime, as well as direct intervention from Russian, American, Iranian and likely other external powers. The only thing that is clear in these battles is that the United States desires to kill and destroy ISIS. What has never been articulated by the Pentagon or White House, however, is what these military actions are designed to accomplish strategically. Of greater concern, however, is that there is no evidence of even a rational tactical objective.

Who will be the benefactor of U.S. airpower in Raqqa and Aleppo if ISIS is eventually defeated? It is entirely possible that U.S. military operations might vanquish ISIS, only to see Assad’s troops take control. If Syria’s regime doesn’t win control, then what is possibly the strongest rebel force, the Al Qaeda group Jabhat al-Nusra, might take charge. It is also far from clear whether even the so-called “moderate” Islamic rebel groups we favor would actually align with U.S. interests if they were to rise to power.

Likewise, in Sirte, Libya, there are a host of different and competing rebel and national groups competing for control of the city. Since the beginning of August, U.S. airpower has been supporting the UN-recognized government in Libya in its attacks against ISIS. If the terrorists are eventually driven out, the fight may simply transition to a new battle between the already competing government forces or other, non-ISIS rebel groups, as the civil war in Libya merely moves to the next phase.

In late August I visited the front lines of the standoff between ISIS and all others near Mosul, Iraq. Peshmerga military commanders were effusive in their appreciation for U.S. airpower, which had helped them check and then begin to roll back Islamic State gains since 2014. But as the date of the assault to retake Mosul gets closer, it becomes less clear how U.S. interests are going to be served after ISIS is defeated.

The intentions and objectives of the Kurdish peshmerga are not aligned with the Baghdad government. The many Shia militias, many of which are backed and led directly by Iran, appear to have designs on certain territory, some of which is currently controlled by ISIS and other parts of which are under Kurdish authority. Sunni tribal militias are still highly antagonistic towards the Shia militias, are wary of Baghdad and have concerns about Kurdish intentions.

Will Washington negotiate among these many competing interests after ISIS is defeated, many of which are themselves terrorist organizations? If groups that aren’t on the U.S.-approved list gain power, will American military power then be turned against them? What will the administration do if our long-time democratic friends, the Kurds, begin battling Shia troops from the Baghdad government in which we’ve invested so much? The problem isn’t just that none of these questions can be answered, it’s that it appears that neither the White House nor the Pentagon has considered the questions, much less developed contingencies for each.

The situation in each of these cities shows the tragic futility of our foreign policy in the Middle East. Our policies have been an unmitigated failure. A course correction is desperately needed. The Obama administration is not likely to make any changes in the final four months of its life. One can only hope that either a Clinton or Trump administration will sensibly confront these ugly realities.

One thing, however, is clear: the costs to U.S. interests abroad and risks to security at home will both continue along their trajectories if real changes are not made in how the government composes and conducts foreign policy. America has historically been its most economically strong and physically secure when it engages in a humble foreign policy that emphasizes global stability and mutually beneficial trade relations. What our country does not need is the perpetuation of a foreign-policy status quo that is addicted to the application of lethal military power that routinely works against American interests.