Why U.S.-Russia Relations Won't Get Any Better 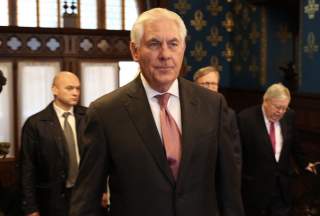 Already Secretary of State Rex Tillerson’s visit to Moscow is being overshadowed by Russia’s UN Security Council veto of a draft resolution to investigate the Syrian gas attacks. Even as Tillerson was meeting with top Russian officials, including President Vladimir Putin, UN ambassador Nikki Haley was decrying Russian actions: “It is long past time for Russia to stop covering for Assad. It is long past time for Russia to push seriously for peace and not be part of the problem.” Trump himself described Syrian dictator Bashar al-Assad today as an “animal.” By forcing Moscow into a corner when it comes to Assad, however, the Trump administration is making a resolution of the conflict less, not more, likely.

It was always going to be a heavy lift for Tillerson. He himself has been all over the foreign policy lot in recent days. Despite calling Russia “incompetent” over its support for Bashar al-Assad’s only two days ago, Tillerson seems to be intent on pushing forward with a reset, however modest, in relations between Moscow and Washington. Tillerson just completed his meeting with President Vladimir Putin, the first such official face-to-face between the Russian president and a senior member of the Trump administration. Putin was a master of ambiguity about whether or not he would meet with Tillerson. In the end he did, signaling that the Kremlin is not intent on a collision course with Washington. Quite the contrary. When Tillerson finally got to meet with the Russian president, they had a nearly two-hour long discussion. This could be the start of the improvement in relations that Trump promised during his campaign.

But don’t count on it. What emerged from Tillerson’s meetings was slim pickings indeed, paling in comparison to the heady vision of U.S.-Russia cooperation that Trump touted during his presidential campaign. It’s not clear that the deconfliction agreement on Syria that Russia said it would restore was truly suspended in the first place. What’s more, the leaders themselves noted that there is significant tension between the two countries and that it will be an uphill battle to build trust. The Russian Ministry of Foreign Affairs seemed rather optimistic, noting the priority of finding consensus in Syria, as well as moving toward the creation of a broad counterterrorism coalition. Common ground between the American and Russian administrations will be even more difficult to find, given the apparent hardening on the fate of Assad—the Trump administration has taken up the mantle of “Assad must go.”

This is not the only somersault that Trump has performed. Today at the White House he met with NATO Secretary-General Jens Stoltenberg and made an amazing statement, at least for anyone who followed his professions during the campaign. His new take on NATO? “I said it was obsolete. It is no longer obsolete.” When it comes to Russia, Trump said, “We may be at an all time low in terms of the relationship with Russia.”

Resetting the reset was a tall order. But the Trump administration seems to have defaulted almost overnight to the very establishment conventional wisdom that it once decried. A new cold war and a breakdown in relations between Russia and America is more likely than a restoration of relations. The truculent spirit of Nikki Haley, in other words, is rapidly pervading the Trump administration. Far from upending the foreign policy of recent decades, the administration is ratifying it.

Image: Rex Tillerson arrives at the Osobnyak Guest House ahead of a bilateral meeting with Sergey Lavrov. Flickr/U.S. Department of State