Why U.S. Strategic Interests Do Not Include Ukraine 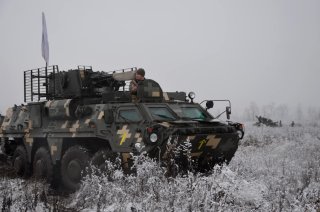 A successful foreign policy must flow from a framework that articulates a country’s fundamental strategic interests. That framework need not be complicated. During the period of Britain’s international preeminence, it had two tenets: maintain naval dominance and avoid the domination of continental Europe by a single power. The United States failed to articulate such a framework when the Cold War ended. Instead, it wasted its unipolar moment on ad hoc responses to individual crises (Somalia, Kosovo) and quixotic attempts to shape the world in its image (Afghanistan, Iraq, Syria, Libya). The almost universal failure of these efforts has left the countries concerned worse off, has killed and maimed countless human beings, has wasted trillions of dollars, and has created a more unstable and insecure international system. We now face perhaps the most dangerous effort yet to continue down this dismal path—the effort to present Ukraine as a vital U.S. national interest, potentially a NATO member for whom the U.S. would assume a treaty obligation to go to war.

If the United States had a strategic foreign policy framework, what would it look like and how would Ukraine fit into it? The United States, in my view, has three fundamental strategic interests. First, the creation of a more stable international system. A stable system is of greatest benefit to the entities at the top of the system. The United States currently occupies that position. Second, avoiding a Chinese/Russian opposition alliance. The benefits to the United States of not having the other nuclear superpower and the other economic superpower allied against it seem glaringly obvious. If one of Henry Kissinger’s greatest foreign policy triumphs was the opening to China that removed the threat of a Soviet/Chinese alliance, how would one evaluate an American policy that resulted in recreating the functional equivalent? Third, reducing the risk of nuclear war. Achieving that objective requires, among other things, avoiding an armed conflict with another nuclear power when its vital interests are involved and one’s own are not.

Ukraine, like every other country, wants to survive and prosper as an independent state. Neither its internal nor its external situation is enviable. It is a deeply corrupt, mid-sized economic basket case that is home to a large, disaffected Russian minority. It shares much, albeit sometimes contentious history with Russia, its most significant neighbor, a country that is also larger, nuclear-armed, and wealthier. Ukraine has two broad strategic choices: to reach a modus vivendi with Russia that satisfies both countries’ essential interests; or to conclude a strategic alliance with another power that will allow it to defy its larger neighbor. The United States is the only other power potentially capable of successfully supporting the second choice. That is the option Ukraine has been pursuing, with U.S. encouragement.

It is easy enough to understand why Ukraine might see this choice as preferable. It would be following the path of its Baltic and eastern European neighbors, who have used NATO and EU membership to solidify their national independence. In terms of U.S. strategic interests, however, there could hardly be a worse choice. Since at least the time of the Treaty of Vienna, it has been clear that a stable international system requires legitimacy, which can only exist if there are no disaffected major powers. Russia’s disaffection from the current international order, which grew throughout earlier periods of NATO expansion, has now reached a crisis point. Creating a more stable international system requires taking Russia's vital interests into account, as well as Ukraine’s. Guiding, and helping, Ukraine toward balancing its desire for closer ties with Europe and its need for acceptable ties with Russia serves the fundamental interests of both Ukraine and the United States. It will help Ukraine avoid what could become a national tragedy. It can help draw Russia into a more productive relationship with the West, lessen the temptation of a military alliance with China and decrease the threat of a conventional armed conflict that could escalate into a nuclear one.

Raymond F. Smith is a retired senior U.S. Foreign Service where he worked extensively on Soviet and Russian affairs. He is also the author of Negotiating with the Soviets and The Craft of Political Analysis for Diplomats, as well as numerous foreign affairs articles.