Why Venezuela Proves That Russia Is Still a World Power 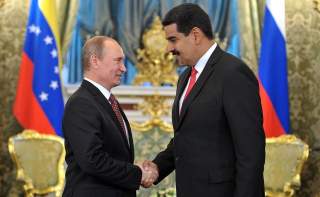 One of the problems with continuing to box Russia into the European policy box is that Moscow, while not wielding all the resources of the former Soviet Union, can still wield influence in a number of different regions around the world. This myopia continually ignores the Russian role in East Asia as a factor for U.S. strategy in the region, notwithstanding Moscow’s strategic partnership with China and its balancing economic diplomacy with both Japan and Korea. It underestimates the impact of the complicated balancing game that Russia has undertaken in the Middle East between Turkey, Iran, Syria, Saudi Arabia, Qatar, Israel, Egypt and Libya. The mantra that “Russia is only a regional power,” or the insistence that its gross domestic product is the equivalent of a middle European or Asian power’s, ignores the reality that Moscow still has certain capabilities and resources that enable it to play at a global level.

Combined with this bureaucratic predilection to consider Russia almost exclusively through a European lens is the continued allergy in Washington to maintaining lines of communication with the Kremlin. With all of the problems that cloud the relationship—Ukraine, Syria, the 2016 election, human-rights issues, etc.—the lack of effective channels to facilitate the sharing of information is a problem. One immediate outcome is that the United States can be taken by surprise or caught off guard by Russian actions—as has already occurred on several occasions in the Middle East, with regard to Syria and Libya.

These two facets of how the United States conducts Russia policy matter, because the next looming fault line that could stoke disputes between Washington and Moscow may not be one of the expected scenarios, such as an uptick of fighting in Eastern Ukraine or an accidental clash in the Baltic Sea between NATO and Russian military aircraft. Rather, it is the festering political crisis in Venezuela.

Ever since the death of Hugo Chávez, his Bolivarian political movement has been struggling to retain power amidst a deteriorating economy run into the ground between a mix of ham-handed government interventions and collapsing oil prices. Nicolás Maduro, lacking the charm and charisma of his predecessor, has watched the opposition grow in popular strength, to the point where it now constitutes the majority in the National Assembly. Following a well-worn playbook, Maduro has sought to find legal and extralegal ways to bypass the opposition in how he governs Venezuela, while desperately searching for ways to stem the collapse of the economy.

Chávez, in order to gain greater maneuvering room, turned to Russia as an alternate source of investment in the country’s energy and mining sectors, and as a source of military hardware to equip his defense and security forces. In turn, access to Venezuelan oil and gas has become an indispensable part of Russia’s state oil company Rosneft’s strategy to turn itself from a Eurasian provider of energy into an international major. PDVSA, the Venezuelan state energy company, in its search for cash and capital, has been willing to allow Rosneft to purchase stakes in more of its crown-jewel assets—and even staked its shares in its U.S. refining and distribution conglomerate CITGO as collateral for additional infusions of funds from Rosneft. Long-term contracts to equip the Venezuelan military and the party militias that Maduro increasingly relies on for security are also important for the Russian defense industry.

In short, over the last several years, Russia has acquired in Venezuela, as it has in Syria, a need to preserve the current regime in order to safeguard its investments. This imperative has strengthened in the last several years, because the opposition has made clear that it views the increased Russian commercial presence in the country as illegitimate. The National Assembly warned last year that it did not consider the new contracts between PDVSA and Rosneft to be valid, and members have dramatically demonstrated their opposition by ripping up copies of the PDVSA-Rosneft deals. The message has been received loud and clear in Moscow: if Maduro goes, so will the Russian acquisitions.

As we have seen in Syria over the past six years, this sets Moscow firmly against the notion of regime change. As unrest continues in Venezuela, particularly as Maduro seeks new ways to bypass the Assembly and rule by alternate institutions under the control of the Chavistas, the likelihood of it spilling over into a full-fledged uprising—and the regime responding by attempting to quell it by force—grows.

Unlike in Syria, Moscow would find an intervention into the Western Hemisphere harder to stage. But Russia could still provide wherewithal and backing for the Maduro government to stay in power—which would certainly prolong the crisis.

But the Venezuela question doesn’t seem to be part of any U.S.-Russia dialogue—and there appears to be no mechanism for how to achieve a “soft landing” that would allow for a stable transfer of power from Maduro to the opposition. Moreover, there is no incentive for Russia at present to work for such an outcome.

The Washington consensus might preach that Russia’s help in this matter is not needed, and that Moscow must pay the price for its decision to invest in the Chávez and Maduro regimes by facing dispossession should the opposition come to power. But that was the thinking for Syria as well, when it seemed that Bashar al-Assad was on the verge of deposition—and look how things have turned out there. U.S. interests aren’t served by having prolonged instability in Venezuela. Thinking about how to incentivize Russia to navigate this crisis needs to be on the agenda.

Nikolas K. Gvosdev is a senior editor at the National Interest and a professor of national-security studies at the U.S. Naval War College. He is the Captain Jerome E. Levy chair of economic geography and national security​.