Why Victory in Mosul Is Overblown 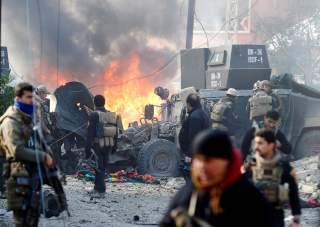 The battle for Mosul is all but completed, and any question about the strategic significance of its conclusion has yet to be answered by military leaders. That being so, it is time to start asking the difficult questions, such as why the current administration—which ran and won on the promise to change American foreign policy—continues to follow the path of its two previous predecessors in embarking on tactical combat missions that do not contribute to U.S. national security nor the accomplishment of strategic objectives?

The next tough question: Why does Washington continue expending the lives and limbs of its service members and hundreds of billions of dollars on lethal military operations that not only fail to enhance American security, but arguably diminish it?

Brig. Gen. Andrew Croft, deputy commanding general for Air, Combined Joint Forces Land Component Command, Operation Inherent Resolve, claimed that the battle to liberate Mosul would be completed “within days,” and then heaped effusive praise on the Iraqi Security Forces (ISF). Their accomplishment, he boasted, “would challenge the best military in the world,” and that the nine-month struggle in Mosul was “like Stalingrad, but it's 10 times worse.”

Such a statement is a gross distortion of historical reality, as an estimated 1.9 million men, women and children were killed in Stalingrad during World War II. In an interview with USA Today in March, the head of Central Command, Gen. Joseph Votel, said less than eight hundred ISF troops had been killed in the fighting up to that point. There is, however, a powerful emotional connection with the word “Stalingrad,” as most are aware that the Nazi tactical defeat there in 1943 signaled the beginning of the strategic end of Hitler’s Germany. ISIS losing Mosul will not have the same strategic result.

Instead, the result will likely be the end of its hold on that territory and the transition to another phase of its radical efforts. Evidence already indicates that ISIS will follow the lead of Al Qaeda after the United States utterly routed it from Afghanistan in early 2002. Al Qaeda simply transitioned back into a shadowy terror group and continued to launch attacks.

General Croft gave some indication of what the end of the battle for Mosul is going to mean for American forces. Once the fighting is over, he explained, “we go where the Iraqis go,” because, as the Air Force Times paraphrased, “The Iraqi government decides how it wants to move forward in its war against ISIS and the coalition provides support.”

As should be painfully clear by now, there is no military solution to the scourge of ISIS. U.S. leaders seem to believe that America can kill its way out of this mess—if it bombs terror groups, deploys more ground forces and trains enough foreign troops, the thinking goes, America will eventually kill enough “bad guys” to quell the threat. Such calculus is out of step with the past sixteen years.

The conditions that allowed ISIS (and Al Qaeda before it) to flourish still persist today. Killing legitimate enemies of the United States is a valid course of action when necessary, but even that is not a substitute for a strategy. The complex regional problem at the root of Middle Eastern violence is not something the United States can solve. Trying to do so has proven to be both expensive and ineffective. That’s why America isn’t “winning.” It’s not because its tactics just aren’t right or because it has applied too little power to a given situation. America isn’t winning because it’s stubbornly using the wrong tactical instrument to solve the problem while avoiding sound strategy that might actually accomplish American objectives.

It is time to embark on a new course of action, one that jettisons the failed policies of continuing to attack everywhere, and instead seeks to contain the violence so it does not spread to other geographic locations. America must seek to diplomatically and politically reduce the reasons men join terror organizations in the first place, and must strengthen homeland security to ensure they don’t harm this country and its citizens. Failure to deviate from the status quo will simply delay and ultimately escalate this grave threat.

Daniel L. Davis is a senior fellow at Defense Priorities and a former lieutenant colonel in the U.S. Army. He retired in 2015 after twenty-one years of service, including four combat deployments. Follow him @DanielLDavis1.