Why Violent Protests Could Overshadow the Black Lives Matter Message 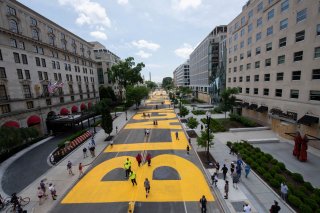 The tragic death of George Floyd on May 25 made clear to the world that the police in America need reform. Racism is real, as indicated by a study that shows African Americans and Asians who “whiten” their resumes improve their chances of a job interview by 2.5 and 1.8 times respectively.

But the protests that followed May 25 ignore the needless deaths that will result from mass-flaunting of social-distancing rules. They accommodated extremists bent on violence, looting and property damage. The right approach to protesting George Floyd’s death during a pandemic was on the internet, not in the streets.

Extremists on both Right and Left who promoted violence sought to short-circuit the democratic process and are now gleefully watching as America becomes more politically divided. Elites trip over their radical chic hairshirts in popularity contests of bland statements of support, drop-in-the-bucket donations, and “action plans” that will likely result in very little other than the appearance of laying their cities at the feet of lawless youth.

On June 4, Attorney General William Barr stated that protesters had thrown projectiles in Washington, DC. He noted that from May 30, 114 police had been injured. Nationally, several police and citizens have been killed and millions in damages done. On June 2, a seventy-seven-year-old retired African American police chief who tried to stop looters after a protest was murdered in St. Louis. Police have been hit with vehicles, stabbed with knives, and shot. In Washington, the historic Church of Presidents was set aflame, and a statue of Gandhi vandalized.

In London, twenty-two police were injured during the first weekend in June, including a policewoman whose horse startled at the aggressive crowds. Some threw bicycles at the animals. A statue of Winston Churchill was defaced with the words, Churchill “is a racist.” Yet, he was instrumental in defeating the Nazis, perhaps the worst racists in history.

What the violent protesters do not seem to understand is that the police in a democracy, despite their sometimes intimidating garb, are not “fascists.” Rather, they do the voters’ will. By attacking the police as a whole, rather than accepting prosecution of individuals like Derek Chauvin according to the law, protesters are attacking the people.

Spineless politicians are no better. In a vain attempt to placate crowds, Canadian Prime Minister Justin Trudeau and New York City’s police chief, Dermot Shea, knelt down in what appeared as a silent kowtow to the mob. When New York City’s mayor, Bill de Blasio, attempted to address protesters with a message of “peaceful change,” he was the butt of epithets, boos and turned backs. In Minneapolis, the majority of council members on June 7 told a rally they would end policing as the city knows it. One council member said he would “dismantle” the police in a city that had an increase in crime the year prior.

Radicals are drawing a lesson from the humiliation of leadership, easy publicity and promises of quick reform. Lawlessness, disregard for public health, and violence works. They are likely now asking themselves, why not up the ante?

President Donald Trump has already called Antifa a terrorist group, and near Minneapolis the St. Paul police reported that protesters were transporting explosives with stolen cars from which the license plates had been removed. When stopped, the drivers fled on foot.

Anarchists in the United States draw inspiration from terrorism in the 1960s and 1970s like the Weathermen in the United States, Red Army Faction in Germany, Red Brigades in Italy and Tupamaros in Uruguay. These groups bombed, kidnapped and murdered their political opponents. Anarchist groups like Antifa and right-wing extremists like the Boogaloo Boys have this potential.

When they do think about the negative effects of violent revolution, like the millions who died from Lenin and Mao, anarchists distance themselves by claiming to be anti-authoritarian or anti-fascist. But were their revolution ever to succeed, then it would perforce become authoritarian again. That is the nature of violence when it overthrows democracy.

Those who nonviolently protest are vulnerable to the radicalization of those at the fringes of nonviolence. Unfortunately, the current Black Lives Matter protests are insufficiently rigorous in firewalling their movement from violence. There is little effective nonviolence training for activists and there aren’t enough nonviolence monitors to ensure that the fringe of protests nearest police lines do not engage. Protest monitors are nonexistent or ineffective at guarding against property destruction. Individuals and groups that succumb to breaking glass and graffiti have apparently not been disinvited. Not policing ourselves allows extremists to hijack messages against racism and police brutality for their own divisive ends, whatever they be: anarchy, fascism, civil war, racism or communism.

Nonviolent protesters are not blameless. When they know that a mass lack of social-distancing during a pandemic will kill and sicken people, and it will, or that peaceful protesters give cover to property destruction and that protests are likely to devolve into violence as they progress, then even they are complicit in the damage that results. Yes, lives are more important than property, as those who want to enable property destruction argue. But nonviolence is not an either-or proposition. We can have both lives and property. If you don’t like the latter, then make your case to the voters nonviolently, just like the rest of us.

Dr. Anders Corr is the publisher of the Journal of Political Risk.