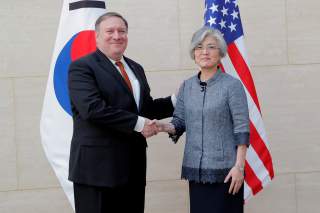 For the past sixty-five years, amidst the ebb and flow of heightened tensions with North Korea, the U.S.-ROK relationship has remained the cornerstone of a successful alliance. South Korean support for the alliance remains  remarkably high. But as the euphoria of unprecedented summitry with Pyongyang fades, uncertainty about the trajectory of diplomacy underscores the grave risks that inadequate coordination between the American and South Korean governments could bring to bear.

The current state of play can be summed up in one of three possible contingencies. We could either be on the cusp of a breakthrough with North Korea; on the verge of declaring experimental diplomacy with Pyongyang a failure; or mired in a permanent impasse. In either of the latter two scenarios, Washington will need to contend with the possibility that the Moon administration may forge ahead with its coveted peace deal with Pyongyang, even as denuclearization negotiations sputter.

Washington and Seoul urgently need to bring their approaches to North Korea back into alignment. In particular, the Trump administration needs to bear down on its plan for how to harmonize Seoul’s primary objective of inter-Korean peace with its own priority of ensuring North Korea’s denuclearization. The appointment of a widely respected professional in Steve Biegun to serve as full-time special envoy for North Korea certainly enhances the U.S. diplomatic team.

Some South Koreans like to think the problem is that President Trump lacks the patience for making a deal with North Korea. Trump is undeniably impatient, but patience will not convince North Korea to start dismantling its nuclear program. The fact that South Korean Foreign Minister Kang Kyung-wha called her American counterpart to express regret at the potential loss of diplomatic momentum highlighted the gap between the two allies.

The Trump administration wants significant denuclearization steps before progress is made on sanctions relief and building a peace regime, whereas Seoul appears content with the North Korean concept that an end-of-war declaration should come first.

Phased, reciprocal steps may still be the most realistic model, but the key will be for Seoul and Washington to agree on what they are willing to give Kim in return for meaningful steps toward denuclearization. Given the Moon administration’s priorities, options the United States will need to consider run the gamut from incremental sanctions relief to investments in physical infrastructure links between the two Koreas.

North Korea has capitalized on the absence of a more concerted effort between Washington and Seoul to pursue a unified strategy. Kim initially turned to diplomacy to avert the United States’ possible use of force, halt sanctions that could eventually cripple North Korea’s economy, and consolidate gains made in his nuclear and missile programs. Indeed, since initiating diplomacy, Pyongyang has sharpened its “treasured sword” of nuclear weapons as suggested in a recent International Atomic Energy Agency report. Furthermore, Pyongyang has weakened the chokehold of international sanctions and strengthened the promise of a peace declaration to preclude Washington from pursuing military options. The relatively late resumption of inter-Korean family reunions on Monday, after a three-year hiatus, suggests that amidst slowing momentum in talks with the United States, Kim now sees the need to keep pushing on Moon’s open-door policy.

Moon indeed appears determined to double down on the preferred Chinese model of rewarding North Korea before it takes meaningful steps toward denuclearization. His Liberation Day speech suggested a departure from the established U.S.-ROK approach of maintaining economic pressure until North Korea has taken significant actions to dismantle its nuclear and missile systems. He intimated that in Pyongyang next month, he would "take an audacious step […] toward the declaration of an end of the Korean War." Additionally, Moon is also negotiating with Pyongyang to scale back some of the ROK military's defenses along the DMZ, a move that has invoked concerns about its ability to defend across the border.

The political variables that could further alter both countries’ calculations regarding North Korea, including Moon’s declining popularity and U.S. midterm elections in November, are wide-ranging. Even as public support for the U.S.-ROK alliance remains strong in both countries, the confluence of burden-sharing, wartime operational control, and trade negotiations could test the relationship. The two allies are slated to conclude negotiations for a new five-year Special Measures Agreement by year's end, and Trump has made clear that he expects South Korea to shoulder even more significant costs than it has in the past. Meanwhile, Moon would like for wartime operational control to reside exclusively within South Korea as soon as possible, even if the ROK armed forces are ill-prepared for that responsibility.

Amidst political uncertainty, Washington must take concrete steps to guard against any further decoupling of U.S. and South Korean strategies. First, with regards to military cooperation and SMA negotiations, now is not the time for the United States to increase pressure on the ROK military and raise the costs of collaboration. The Trump administration also needs to walk the line between providing support for the peace processes that President Moon is driving forward and reining in some of his unhelpful rhetoric that hints at prematurely relieving economic pressure on North Korea.

Unilateral concessions to North Korea are no more likely to succeed than imposing inflexible demands on the Kim regime. The established principle of action-for-action remains the most sensible framework for dealing with North Korea. The United States needs to temper expectations Moon may be stirring that the United Nations or U.S. Congress will curb sanctions on North Korea before Pyongyang takes verifiable denuclearization actions. The resilience of the alliance rests upon the determination of both American and South Korean leaders to harmonize their strategies, even if it means delaying the gratification of quick political wins.

Dr. Patrick M. Cronin and Kristine Lee are senior director and research associate, respectively, at the Asia-Pacific Security Program at the Center for a New American Security.