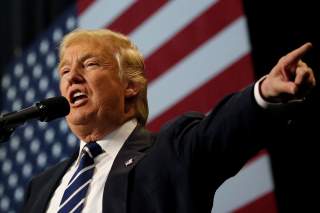 Historians agree that the dismantling of the British Empire wasn’t a linear process involving a manageable and steady decline in its military and economic power; instead it had a haphazard muddling through quality. British leaders weren’t aware that “Rule, Britannia!” was already history even after the fat lady had sung that it was over.

Indeed, Prime Minister Winston Churchill, who had led his nation into an impressive military victory in World War II, confident that the defeat of Nazi Germany would help save the British Empire, failed to recognize that the enormous military and economic costs of the war had actually created the conditions for the liquidation of the empire, starting with the withdrawal from Palestine and the “loss” of India after the war.

But while the sun was setting on the British Empire, members of its political elite continued to live under the illusion that their nation had remained a paramount global power. Indeed, if you traveled in a time machine to London 1949 and attended a debate in the British Parliament, browsed through the pages of the London Times, you would come across numerous references to Britain as a great power.

And if you encountered diplomats in His and (after 1953) Her Majesty’s Diplomatic Service and bankers in the city of London, you wouldn’t be surprised if they continued to behave as though the world was still their domain to rule.

It was the humiliating abandonment of the Anglo-French invasion of Suez in collusion with Israel in 1956 that proved to be the turning point in Britain’s retreat from empire and ensured that London would never again attempt global military action without first securing the acquiescence of Washington. The time lag between the effective end of the British Empire and the recognition that indeed it was all over, proved to be quite lengthy.

The concept of “recognition lag” is familiar to economists. It refers to the time lag between when an actual economic shock—such as a sudden boom or bust—occurs and when it is recognized by economists, central bankers and the government, like when officials signal a recession in the economy several months after it has actually begun.

And just like changes in economic conditions, changes in the global status and power of nations are not always immediately apparent, especially to the politicians and the generals who yield that power and to the journalists who cover them. That the elites continue to share such misconceptions about their nation’s ability to exert global influence has less to do with the power of inertia and more to do with the vested interests they have in maintaining the status quo, which could be threatened by challenges at home and abroad.

From that perspective, there is an eerie resemblance between the resistance of officials, lawmakers and pundits in London 1949 and that of their contemporary counterparts in Washington 2017 to adjust their nation’s foreign policies to the changing global balance of power.

As they see it, the nation’s inability to continue dictating global developments, reflects the incompetence of policymakers who are either too incompetent or too appeasing in responding to threats posed by an aggressive outside power, whether it was Egypt’s leader Gamal Abdel Nasser in 1956 or Russia’s president Vladimir Putin in 2017.

In a way, the preoccupation, if not the obsession of Washington elites with Russia’s growing military power and alleged aggressive intentions go back to the administrations of both President George W. Bush, who refrained from coming to the aid of the Georgians during their war with Russia in 2008, and of President Barack Obama, who took President Putin up on an offer to peacefully dismantle the Syrian chemical-weapons program following a nerve-gas attack near Damascus in 2013.

Indeed, in both cases, members of the U.S. foreign-policy establishment, employing the familiar Munich analogies, blasted the two presidents for failing to take decisive actions against the Russians or their allies in the Caucasus and Levant. Their denunciations of presidents Bush II and Obama can be seen in retrospect as dress rehearsals for the current campaign against President Donald Trump’s attempts to pursue a diplomatic détente with Moscow.

Both the neoconservative and the liberal internationalist critics of President Trump’s opening to Russia seem to be residing in a time warp: the Cold War has just ended and America’s Unipolar Moment has arrived. The rest of the world, including a defeated and humiliated Russia, should and would accept the dictates imposed by the masters of the universe in Washington, who, after all, only mean well by seeking to to spread democracy and freedom worldwide.

President Putin, who now rejects the inevitable, is not only failing to adjust his policies to the new U.S.-dominated balance of power; he is also resisting the tide of history. And those American leaders who refuse to stand up to this aggressor, lack resolve (President Bush II), are idealistic peaceniks (President Obama) and in the case of President Trump, are driven by political corruption and greed as represented by his “collusion” with the Russians.

These critics fail to recognize or to admit that the perceived erosion in United States’ ability to call the shots around the world reflects real changes in the global balance of power and the U.S. position in it that have occurred since the fall of the Berlin Wall. They insist that if the White House had adopted their policy prescriptions, Russia wouldn’t have been able to sustain the power of its allies in Syria or, for that matter, in Crimea. Those “moderate” insurgents would have ousted Bashar al-Assad by now, and a unified and democratic post–Civil War Syria would emerge in the aftermath of a peace agreement brokered by Washington.

That’s rich coming from the same policymakers and pundits who served as the cheerleaders for the ouster of Saddam Hussein and the promotion of the freedom agenda in the Middle East and later, who applauded the leaders of the so-called “Arab Spring” and supported the removal of friendly regimes in Tunisia, Egypt and Libya.

The policies they promoted and implemented have destabilized the entire Middle East, opened the Pandora Box of Sunni-Shiite rivalry, created the conditions for the civil war in Syria and, eventually, contributed to the rise of the Islamic State.

U.S. military power was overstretched to the maximum, as American policies helped strengthen Iran and its surrogates in Iraq, Lebanon and Palestine, producing a long-term transformation in the balance of power in the Middle East and worldwide, and significantly eroding Washington’s geostrategic and geoeconomic clout.

From that perspective, President Trump was elected in order to get out of the hole dug by his current critics. He is supposed to readjust U.S. interests and policies to the new global realities, and recognize, for example, that continuing to support the “moderate” rebels in Syria doesn’t make sense in terms of U.S. interests—and that a final deal could include the survival of the Assad regime could serve those interests.

The neoconservatives and liberal internationalists who bash President Trump’s foreign policies seem to give a bad name to the term Chutzpah. They not only fail to recognize that Washington’s global power has eroded, they also refuse to admit that they were responsible in large part for these changes.

In that context, the continuing obsession with Russia and the insistence that President Putin is in the process of resurrecting the Russian Empire, is particularly ironic. Those making the claim, like Max Boot, argued in the aftermath of 9/11 that the United States the most realistic response to terrorism was for America “to embrace its imperial role.” They have been the driving force behind the expansion of NATO and the invasion of Iraq and of Afghanistan, as part of a strategy aimed at remaking the Greater Middle East and achieving a hegemonic U.S. position in that part of the world.

The Russian Empire has been dismantled a while ago, and President Putin’s attempts to reassert Russian power are similar to the late French president Charles de Gaulle’s effort to reaffirm his country’s global status after it had lost it empire. At the end of the day, France ended up playing the role of a second-rate global power—with nuclear weapons—which is probably the fate awaiting Russia.

In fact, it is American power that is now reaching to what has been left from Russian Empire in Central and Eastern Europe, to the Caucasus and Central Asia, fighting its longest war in history in the former Russian protectorate of Afghanistan.