Why We Need to Pay Attention to Russia's Elections 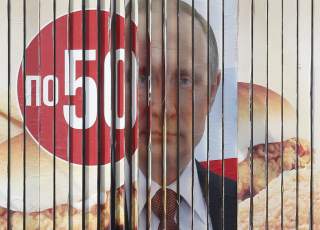 The conventional American wisdom about Russia’s presidential election on March 18 holds that it will be a nonevent. Putin’s victory is already such a foregone conclusion as to be risible. His iron-grip on Russian media denies access to opposition figures and stifles any nascent public dissent, while the Kremlin blankets the national airwaves with a tightly managed narrative extolling his wise leadership. Any viable challengers have been long since been choked out of campaigning through intimidation, legal coercion, and even death, robbing the election of any whiff of democratic legitimacy. The only things in doubt are how many voters will turn out and how large Putin’s victory margin will be.

There is much truth to this conventional wisdom, but there is also a great deal missing. Russians have few illusions about their country’s controlled media landscape, tilted electoral playing field, and politicized courts. In Moscow and beyond, almost no one doubts that Putin will be elected to a fourth term in office. Still, Kremlin anxiety about the election is palpable, and Russian newspapers are spilling considerable ink about the impending vote. Russians clearly believe the presidential election matters, even if the victor is predictable. Why?

To answer this question, it is necessary to widen the analytic aperture and look at three realities that drive Russian politics. The first is the nature of political power. In Russia, elections do not determine who will occupy the Kremlin; that is decided in advance by Russia’s political heavyweights. But in any system, democratic or authoritarian, the leader on top faces the challenge of being on top in fact as well as in name. Russian presidential power stems more from intangible, informal factors than it does from ex officio authorities. It is far greater on paper than in practice. Putin has spent years gathering power and carefully husbanding its use, but even he cannot simply issue orders and trust that his government will act accordingly. In fact, as any student of czarist-era Russian literature could testify, Russia’s bureaucrats are masters of feigned compliance and passive resistance. Elections play a big role in determining how much power the president can wield as he navigates among Russia’s leading political and business elites.

The second reality flows from the country’s elite political dynamics. Russian elites are by no means a tightly knit, trusting group, confident in the merits of their success and corresponding right to rule. On the contrary, many of them achieved their wealth and power through illegitimate means. They recall only too well the “wild capitalism” of Russia in the 1990s, when billionaires were made overnight but lived in constant fear that rivals would settle business scores with bullets or seize their assets through corrupt connections. They fear their fellow elites, and they distrust Russia’s legal system and governing institutions. As a result, they want a strong ruler in the Kremlin who can referee elite in-fighting and protect them from each other.

Third, these elites tend to fear and disdain the Russian people, who represent a perpetual threat to their power and perquisites. They want a president smart enough to keep the masses satisfied, both artificially by managing the media narrative, and genuinely by delivering real security and prosperity. And they want someone tough enough to crack down on protests when his efforts to keep pace with popular expectations fall short.

The election will help Russia’s elites to gauge how much power Putin really can draw upon to corral Russia’s heavyweights and meet popular expectations. If Putin is re-elected by too small a margin (in the 50–60 percent range), if the turnout is relatively paltry (below 60 percent), or if he resorts to transparent falsification (much beyond 5 percent of the vote), his image among Russia’s elites would suffer. Thus, the Kremlin’s sweet spot for the election is said to be 70 percent of the vote with a turnout of 70 percent. Results falling well short of those benchmarks would mar Putin’s image of authority, while anything greatly exceeding them would smack of falsification and imply that he lacks the legitimate popularity required to rule effectively. Elite in-fighting would intensify as players begin to jockey for position in the post-Putin political order, and Putin’s ability to focus on forming and implementing coherent policy would suffer.

The election is not solely about power, however. It will also serve as a referendum on the relative strengths of the four primary political winds blowing in Russia: nationalism, Communism, liberalism and populism. As their popularity ebbs and flows, Putin tends to adjust his mix of policies to balance elite factional fights and align with popular sentiment. If the nationalist, Communist, or liberal candidate draws notable support, Putin’s postelectoral policies are likely to tilt a bit more in the direction of the corresponding voter sentiment. Similarly, if populist leader Alexei Navalny (whom the Kremlin has banned from running) succeeds in persuading large numbers of voters to boycott the election, we can expect the Kremlin to play up a law and order agenda, both to discourage protests and to satisfy popular demands for curtailing corruption.

These nuances matter greatly in Russia, but do they matter for the United States? Yes, but not because the election is likely to produce dramatic shifts in Russian foreign policy. There is a broad consensus across Russia’s political spectrum that the country must assume its rightful place among the world’s great powers, dominate its region and play a key role in critical international issues. Nobody—not even the liberals or Navalny, who is arguably more nationalist than Putin—questions this ambition. But if Putin were weakened by a poor electoral showing, he might be less willing to compromise in the event of an accidental clash between U.S. and Russian forces in Syria, Ukraine, or the cyber sphere. That danger, more than campaign threats about new Russian weapon systems, should loom large for U.S. policymakers as they consider how to manage the risks in our adversarial relations with Moscow.

George Beebe is Director of the Intelligence and National Security Program at the Center for the National Interest. He served as the CIA’s chief of Russia analysis and as special advisor to Vice President Cheney on Russia.

Image: A multi-sided transformable board, which advertises the campaign of Russian President Vladimir Putin ahead of the upcoming presidential election, is on display in a street in Stavropol, Russia March 5, 2018. REUTERS/Eduard Korniyenko