Why the White House Has Its Eyes Wide Shut on China 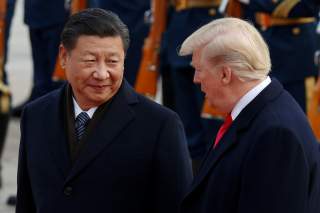 Ever since President Xi Jinping announced China’s “One Belt, One Road” (OBOR) strategy—now called the Belt Road Initiative (BRI)—in 2013, the United States has sought to thwart, obstruct, or counter the Beijing initiative. The latest of these efforts comes in the ambiguous form of the Blue Dot Network (BDN) scheme, which was announced on the sidelines of the Association of Southeast Asian Nations (ASEAN) Summit in Bangkok, Thailand on November 4, 2019.

Leading the U.S. delegation, with the conspicuous absence of President Donald Trump at the summit, Secretary of Commerce Wilbur Ross told in a conference call with reporters that “we have no intention of vacating our military or geopolitical position” in the Indo-Pacific region. To illustrate President Donald Trump’s commitment, U.S. officials launched the administration’s BDN blueprint in several ways at different times and venues of the ASEAN Summit. Initially, the BDN was officially announced by a representative of the U.S. Overseas Private Investment Corporation (OPIC) at the Indo-Pacific Business Forum in Bangkok, which was attended by some one thousand people, including more than two hundred American corporate executives.

Driven by the Washington-based OPIC, in partnership with the Australian Department of Foreign Affairs and Trade (DFAT) and Japan Bank for International Cooperation (JBIC), the BDN was meant to serve as a multi-stakeholder initiative that will harness governments, private sector, and civil society to “promote high-quality, trusted standards for global infrastructure development in an open and inclusive framework.”

The details of BDN were later unveiled in a panel discussion of representatives from OPIC, DFAT, and JBIC. U.S. Undersecretary of State for Economic Growth, Energy, and the Environment Keith Krach claimed that “this endorsement of Blue Dot Network not only creates a solid foundation for infrastructure global trust standards but reinforces the need for the establishment of umbrella global trust standards in other sectors, including digital, mining, financial services, and research” in the Indo-Pacific region and around the world.

Not only the manner by which the lower level of government official engagements on the sidelines of a Summit but also their claims raise a number of bigger questions. For example, the yet-to-be formalized BDN agreement reached by the United States, Australia, and Japan can hardly be considered “global.” Nor can they be constituted a “standard.” Krach goes on to assert that “such global trust standards, which are based on respect for transparency and accountability, sovereignty of property and resources, local labor and human rights, rule of law, the environment, and sound governance practices in procurement and financing, have been driven not just by private sector companies and civil society but also by governments around the world.”

To these assertions, Peter McCawley of the Lowy Institute in Australia has raised a range of important questions: “What does all of this mean? What sort of ‘global trust standards’ are we talking about? Who will set the standards? And who will monitor them?”

Interestingly, the new White House National Security Advisor Robert O’Brien maintained that the BDN scheme was designed to counter China’s BRI projects that were not considered to be “high quality.” Indeed, it was an allusion to American platitudes, and Western nations in general, that Beijing was luring developing nations into a debt-trap diplomacy. On the sidelines of the ASEAN summit, O’Brien earlier accused Beijing of “intimidation” in the South China Sea, stating that smaller countries should not give up on their sovereignty and resources in the disputed waterways to the Chinese “conquest.” Trump’s advisor then explained that “Beijing has used intimidation to try to stop ASEAN nations from exploiting the off-shore resources, blocking access to $2.5 trillion dollars of oil and gas reserves alone.”

These pronouncements would suggest that the BDN scheme has not only missed its target, but also smacks a bit of paternalism.

First of all, there is some truth to these American claims. Many of these BRI countries have some of the highest levels of corruption and the lowest levels of transparency in their public sector, according to Transparency International’s Corruption Perception Index. Among China’s western neighbors through which the BRI runs—countries such as Kazakhstan, Kyrgyzstan, Tajikistan, Turkmenistan, and Uzbekistan—as well as most of the countries on the African continent, all rank among the worst in the world. As to risk factor, all have some level, or a significant level of debt risk, both operational and economic. According to Moody’s Investors Service, only 25 percent of the 130 countries that have signed BRI cooperation agreements have an investment grade rating: “forty-three percent have junk bond status, while a further 32 percent are unrated.”

In addition, it should be remembered that it is virtually impossible to achieve a high degree of precision on the level of China’s loans overseas to the developing world. Generally, China funds BRI projects through its policy banks, such as the China Development Bank, the Export-Import Bank of China, and via the State Owned Enterprises. Neither the banks nor the recipients themselves share the rates at which these loans are made. The Paris Club, which tracks sovereign bilateral borrowing, would normally track these transactions; however, since China is not a member of the Paris Club, it “has not been subject to the standard disclosure requirements.” Therefore, China does not provide its direct lending activities related to BRI. An extensive research analysis by the U.S. National Bureau of Economic Research concludes that nearly a half of China’s loans to the developing world are “hidden.”

One of the most compelling cases was Sri Lanka. After being unable to repay $1.4 billion in loans for the Hanbantota Port, the government of Sri Lanka not only handed over a ninety-nine-year lease, but a year later went back for a billion-dollar loan for highway construction. Even in the Maldives where, again, politics intervened, even as the government that is still unwilling to back off some of these key projects. In Malaysia, there is a $20 billion rail project, and the Chinese are now offering—because they are flexible, because they are learning—to cut the price in half, and Malaysia might end up going forward with it. According to an analysis by the Brookings Institution, recipient countries in general still find the BRI packages persuasive.

Nonetheless, the BDN misses the mark on a number of counts. First, the widely reported Sri Lanka’s debt-trap Hanbantota Port remains as a poorly conceived white elephant project that has insufficient revenue to service the loan; hence, the government of Sri Lanka asked China to take over the port as the debt-for-equity swap proposed by the Colombo administration. It was hardly a Chinese intent to set a trap.

In its April 2019 analysis on “New Data on the ‘Debt Trap’ Question,” the Rhodium Group states that “Sri Lanka’s decision in December 2017 to grant a 99-year concession to China on the Hambantota Port, and to agree to China Merchant Port Holdings acquiring 70 percent of the port’s operating company, serves as a cautionary tale of the dangers attached to countries’ overreliance upon Chinese financing.” The Sri Lankan case of asset seizure is more of an outlier than a representative of the BRI projects surveyed. The Rhodium report then concludes that “actual asset seizures are a very rare occurrence. Apart from Sri Lanka, the only other example we could find of an outright asset seizure was in Tajikistan, where the government reportedly ceded 1,158 square km of land to China in 2011.”

All these analyses—by the Rhodium Group, the Brookings Institutions, and Moody’s Analytics—indicate that most of the BRI nations do have varying levels of debt burdens, some significantly. However, the debt remains manageable for the most part. The debt vulnerability involved depends in part on how much increasing investments correlate with economic growth and productivity.

Further, these analyses reveal that China’s lending practices do not follow any specific pattern in the debt profiles of recipient countries or the levels of governance. China has lent to both authoritarian governments as well democratic ones, and with varying degrees of debt. More interesting is the fact that Beijing will sometimes write off debts without a formal renegotiation process. Instead, it “usually unilaterally agrees to cancel part of a borrowing country’s debt, even when there are few signs of financial stress on the part of the borrower.” These cases of debt forgiveness likely suggest that the debt itself is less important than the objective of improving bilateral relations and diplomacy. This points to where BDN misses the mark on the second count.

While the BDN focuses on “global trust standards” and “high quality” loans, the BRI is not a monolithic infrastructure investment agenda; rather, it clearly reflects “a blend of economic, political, and strategic agendas that play out differently in different countries, which is illustrated by China’s approach to resolving debt, accepting payment in cash, commodities, or the lease of assets.” The strategic objectives are especially apparent where access to key ports and waterways are aligned with Beijing’s investment and diplomatic priorities.

The continuing debt trap narrative appears to be driving the idea that developing nations do not have the financial nor technocratic savvy to avoid a debt trap, which has not been the case. Some countries have now learned from the Sri Lanka experience and have recognized that the costs far outweigh the benefits.