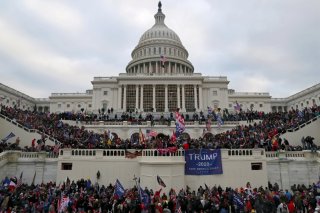 THE TALK show host lays out his argument borrowed from a book he’s just read, or at least consulted, while on holiday. He calls liberalism “the ideology of our national suicide.” Driven by guilt and the temptation of socialism, liberals consider the American dream a nightmare because it “distorts their bright vision of human perfection with such corny concepts as national sovereignty, Constitutional limitations upon Federal power and the religious principle of personal responsibility.” If and when liberals succeed in their aims, he announces, “the American Republic will have died, and by its own hand.”

This could be any conservative media star: Tucker Carlson, Mark Levin, or Laura Ingraham. Anyone on Fox’s prime-time lineup. Instead, it’s April 18, 1965. The pioneering conservative talk radio host Clarence Manion is summarizing the latest book by James Burnham.

The United States is perhaps as polarized politically and socially as it ever has been in its modern history. A striking fact about the 2020 Presidential Election was the extent to which hyper-partisans treated it as the decisive moment for the future of the nation. As the conservative philosopher Kenneth Minogue observed, “The psychological mark of ideological entrapment is the feeling of despair which accompanies the prospect of defeat in argument.” Donald Trump’s many lawsuits, the Stop the Steal rallies, and the January 6 Riot evince all the markers of ideological entrapment on the Right.

Polarization on the Right has many parents: geographical sorting, direct mail hyperventilating, negative partisanship, talk radio, click-hungry websites, and news and social media echo chambers. But the extremes of polarization we see today have origins in both the logic and often the text of mainstream American conservatism’s most influential thinkers. Not only have the lines between respectable conservatism and extremism often been porous and blurred, but conservative intellectuals gave high-brow expression to the ideas that fuel polarization and ideological entrapment.

James Burnham and Willmoore Kendall were two of the most serious thinkers in the early conservative movement. They explicitly articulated the beliefs of the American Right, and worked alongside other activists and intellectual entrepreneurs to forge a political movement. For all their insight, Burnham and Kendall helped give birth and intellectual legitimacy to a conservative movement primarily defined by its opposition to liberalism, resentment of elites, distrust of democracy, and drive to fight the liberal destruction of the America and “the West.”

They were very different men. Kendall was flamboyant but deeply troubled. Burnham was consummately buttoned down, his personal manner masking his intellectual intensity. Of similar ages, their careers paralleled one another. Both were former Trotskyists; both studied at Oxford University; both had careers in academia and military intelligence; although conservatives, neither was a die-hard free marketer. Both felt the touch of Catholicism: Kendall a convert, Burnham for much of his life an apostate.

Both Kendall and Burnham mentored William F. Buckley, Jr. Kendall taught Buckley at Yale, informing his thinking and mode of speech. At one stage, Buckley attributed “whatever political and philosophical insights I have” to Kendall’s “tutelage and his friendship.” In 1951, Kendall introduced Buckley to Burnham. Using his intelligence connections, Burnham first found Buckley a position in the CIA. Years later, they cofounded National Review, which Kendall initially joined as book review editor. After Buckley’s father died in 1958, Buckley told Burnham he ranked “second to none” among his male relationships.

The two theorists brought very different assumptions to conservatism. Burnham largely discounted democracy through an elitist cynicism; Kendall’s flyover-country populism put great faith in the American people, anticipating the Silent Majority. The polarity is clearest in the titles of their books, published within a year of each other. Kendall presented The Conservative Affirmation, Burnham prophesied The Suicide of the West. Yet although their analysis ran along different tracks, they shaped the logic of conservatism in similar ways.

SOFT-FACED, well-dressed, and impeccably mannered, Burnham was an unlikely radical. From a well-to-do Midwestern family, he attended elite prep schools, Princeton, and then Oxford. He wrote and lectured on art and aesthetics, earning a teaching position at New York University. The economic collapse of the 1930s and the influence of his colleague, Marxist thinker Sidney Hook, upended the haute-bourgeois Burnham’s worldview. He moved to the radical Left when he cofounded the Trotskyist American Workers Party in 1932. Throughout the 1930s, he “wrote extensively for the radical and revolutionary press, edited various publications, wrote pamphlets,” and engaged in factional struggles. In his memoirs, Hook recalled Burnham’s reputation in leftist circles, and the mutual embarrassment at his lavish mode of living.

Seedy-looking members of the Socialist Worker’s Party ... would find Burnham in formal dinner dress, together with his guests at the table or in the midst of late bibulous partying. Burnham would excuse himself, have a hurried whispered consultation with his comrades, and then return to his dinner party.

Despite being one of Trotsky’s chief interpreters and mouthpieces in America during the 1930s, by the end of the decade, Burnham broke with the exiled communist. Burnham lost faith in the empirical realities of Marxism and reoriented his thinking toward an increasingly conservative realpolitik in which “acts and the consequences of acts” were “far more revealing than words.”

The first step in Burnham’s post-Marxist journey, The Managerial Revolution, published in 1941 and stringently reviewed by George Orwell, who detected a kind of Leninist power worship in Burnham, combined materialist analysis and futurology. Burnham argued technology and expertise created a new social class, managers, who would presently inherit the earth. Not only were the managerial class taking power—in Nazi Germany, the Soviet Union, and even, to a lesser extent, through the New Deal, the United States—they generated an ideology to sustain their class and replace bourgeois liberalism. Burnham extrapolated the argument to its limit and predicted not only coming state ownership of the economy and growth of the executive and administrative state, but also Nazi German victory and the split of the Soviet Union into Asian and European halves.

How political and economic structures produced self-justifying ideologies captivated Burnham. And he could not resist grand predictions. These were key themes of his work. He expanded on the core insights of The Managerial Revolution by reading European “elite school” thinkers who taught that in any society an oligarchy necessarily holds power. In The Machiavellians, Burnham’s follow-up to The Managerial Revolution, he placed himself in this tradition, but also committed himself to defending “civilized,” if not democratic, society, both through geopolitical maneuvering and supplanting decadent bourgeois ideology with heroic myth.

Burnham became an avatar of intellectual anti-communism, and put his mission into practice in the early 1950s for American military intelligence. He cofounded the Congress for Cultural Freedom, hoping to build an “anti-communist united front.” Mamaine Koestler, the wife of his ally Arthur Koester, remarked that “Burnham looks very sweet and gentle ... but he is much less scrupulous about means than” her husband. Eventually, Burnham became frustrated by the CIA’s efforts to placate the European non-communist Left. His superiors sidelined him in 1952. Late the following year, Burnham cut his ties with New York University and the American intellectual Left. Burnham’s iron intensity had no patience for liberal centrism as he strode from the radical Left to the anti-communist Right.

A RESTLESSNESS defined Willmoore Kendall. Born in Konawa, Oklahoma, son of a blind and possibly irreligious Methodist preacher, he was a child prodigy. It’s hard to keep track of his early career: he first attended university at the age of thirteen. After studying and teaching at various institutions and working as a reporter in the 1920s and early 1930s, including as foreign correspondent for the United Press in Spain, Kendall went to Oxford as a Rhodes Scholar in 1935. He earned his Ph.D. at the University of Illinois in 1940, teaching at four different universities in seven years before embarking on a civil service and intelligence career focused on Latin America. Kendall loved chess, wore loud sport coats, spoke three languages and read and wrote three more. He was depicted in fiction by both William F. Buckley, Jr. and Saul Bellow. “Mr. Mosby,” Bellow wrote, “had made some of the most interesting mistakes a man could make in the twentieth century.” After a peripatetic existence, Kendall became associate professor of political science at Yale in 1947. A “non-party” conservative by the time he arrived at Yale, politics and personal volatility—exacerbated by alcohol, marital breakdowns, and mental health—destroyed his position at Yale as he dissipated his intellect on various unfinished projects. As Kendall’s life fell apart, he had a “profound religious experience” and converted to Catholicism. His acolyte Buckley described Kendall losing “the cynicism that he acquired as a precocious scholar at Oxford and as a young and gifted teacher in the turbulent ‘30s,” to become “one of the few fine and intensively moral figures of our time.”

Kendall’s reputation was made by his first book, a contrarian interpretation of John Locke published in 1941. Through a close reading, Kendall contended that Locke believed in natural rights, but such rights were shaped and limited by local communities. Kendall became a theorist of representative democracy and social consensus. “All political societies,” and especially this “people of the United States,” are built “upon what political philosophers call a consensus,” he wrote. Societies change in slow, organic, and deliberative ways. “Freedom of thought and freedom of expression there are and must be, but within limits set by the basic consensus.” Kendall firmly believed government should not undermine society by enforcing abstract rights that cut against the orthodoxy. His friends and biographers suggest Kendall’s fear of social collapse emanated from his time in Civil War Spain and the flagitious violence he had witnessed there.