Why Xi Jinping Cannot Back Down on Coronavirus 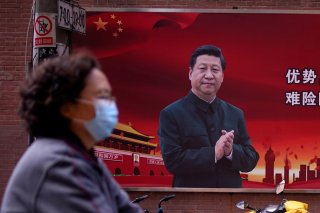 In the late 1950s, Mao Zedong embarked on what would become one of modern-day China’s worst policies. Known as the Great Leap Forward, Mao attempted to move the country from an agrarian economy into a communist society by forming communes and increasing grain yield. Between 1958 and 1962, local leaders, in order to tow the chairman’s line, artificially inflated their quotas in their upward reporting, fearing to tell the truth even if the country was in the midst of a great famine. As subsequently chronicled by Yang Jisheng in his 2012 book, Tombstone: The Great Famine,

In the face of a rigid political system, individual power was all but non-existent. The system was like a casting mold; no matter how hard the metal, once it was melted and poured into that mold, it came out the same shape as everything else. Regardless of what kind of person went into the totalitarian system, all came out as conjoined twins facing in opposite directions: either despot or slave, depending on their position in respect of those above or below them. Mao Zedong was a creator of this mold […] and he himself was to some extent a creature of this same mold.

More than half a century later, it would seem that a similar storyline is being played out in mainland China. As observed by Huang Yanzhong, Beijing’s harsh measures in its pandemic responses are undermining the Chinese Communist Party’s grip on power as it faces economic chaos and social backlash from millions of citizens throughout the country, particularly in Shanghai, and to some extent, Beijing also. The question, of course, is whether Xi is able to back down, or failing which, an off-ramp can be provided to allow him to admit that a zero-Covid strategy had failed. On present evidence, this is unlikely, not because Xi does not want to—but because he is unable to. This may sound strange, especially to Western observers who place emphasis on human agency and political will. Given Xi’s grip on power in China, what is there to prevent him from doing anything he wants? After all, having power—by definition—is about being able to do what one wants to do. If Xi is unable, what does it say about the extent or efficacy of his power? More specifically, what is stopping Xi from making policy changes midstream or admitting that China’s coronavirus response in achieving a zero-Covid outcome does not work?

There are at least two reasons. Firstly, given the centralization of power on Xi, whatever successes China has achieved are attributed to Xi’s ability, foresight, and political intuition. In 2020 and 2021, when the coronavirus was raging throughout the world while China enjoyed the fruits of its border closures, the virtues of Xi were widely extolled throughout the country. Many Chinese citizens overseas also looked admiringly at Beijing’s unique approach to combating the coronavirus with pride, proffering them the moral high ground to criticize other countries—especially the West—for their problematic responses. The flipside of this, however, is also painfully clear. Whatever problems China faces are also a reflection of a broader, more systemic flaw within the Chinese political system. As Singapore’s former top diplomat Bilahari Kausikan observed in a controversial February 2020 commentary which was criticized by the Chinese Embassy in Singapore, the coronavirus pandemic was a consequence of a Leninist value system whose essence is the party’s insistence on control, and this control had resulted in the Chinese government botching its initial response to the pandemic which spread throughout the world. As the former Wuhan mayor Zhou Xianwang had inadvertently admitted on national television, he was unable to reveal information about the virus in the early days of the outbreak because he was unable to do so. Zhou himself said, “about not publishing information timely enough, I hope the public can understand that we need to release information about infectious diseases according to the law. As the local government, I can only release the information after being authorized to do so.” Zhou has since stepped down, presumably being the fall-guy for being at Wuhan’s helm during the outbreak, but his words continue to be very telling.

The second interrelated reason, however, is perhaps more important, at least in explaining why Xi is unable to make any policy shifts to living with the virus, in the same way political leaders in countries like Australia, New Zealand, and Singapore have done (in moving from a eradication strategy to an endemic strategy). To understand why Xi is unable to admit that he is wrong, one needs to first locate the source of his legitimacy in the eyes of the Chinese. Given the one-party system, policies are not made as a result of popular will as in democracies, but rather they are a result of both internal factional debate, domestic opinion-sensing, and force of personality. While much of these discussions and eventualities are opaque and out of the public eye (let alone those from outside China), the point of all these is to ensure that a semblance of unity is preserved within the Chinese government—and the CCP. While the pursuit of political unity is not entirely unique to China, the reason for unity is. In democratic countries, the lack of unity demonstrates the existence of a plurality of viewpoints all competing for influence; in China, however, the lack of unity means a loss of face for the Chinese government.

Indeed the Chinese saying “jiachoubukewaiyang,” which is sometimes loosely translated as “not airing one’s dirty laundry in public,” is reflective of the political psychology in Chinese (or perhaps even in Asian societies) in which face is paramount to one’s—or a group’s—sense of identity and cohesion. As I have argued in my book, China’s Political Worldview and Chinese Exceptionalism, part of China’s claim to greatness—in the twenty-first century—is its claim to be a unique or exceptional country, one which views itself not only as good, but better than the West. To that end, any attempt to suggest that China and the Chinese government’s way of doing things is no different or even inferior to others cuts at the heart of what it means to lose face in the Chinese mind. As defined, face is the “respect, pride and dignity of an individual as a consequence of his/her social achievement and the practice of it.” More than that, unlike Western societies in which the separateness of an individual from his community is emphasized, Chinese face is often tightly linked with vertical relationships. Put simply, for Xi to admit a mistake is tantamount to losing face in front of all the Chinese people. Unlike leaders in democracies who can then be impeached or voted out of power while the party continues to function, Xi’s loss of face—being the supreme leader—would result in the CCP being delegitimized in the eyes of Chinese citizens.

As sinologists like Lucian Pye have observed, the self-identity of the Chinese leader is of crucial importance as it is tied intrinsically to the nation’s identity. Hence, Chinese leaders are often seen as “semi-divine, superman emperors, leaders who operate out of sight, secretly, behind the scenes”, a paragon of virtue as it were. According to a 2009 Wikileak report when Xi was vice-president, Xi was described as exceptionally ambitious, confident, and focused and had his eye on the prize from early childhood. Unlike many youths who made up for lost time by having fun after the Cultural Revolution, Xi “chose to survive by becoming redder than red.” He joined the Party and began mapping out a career plan that would take him to the top of the system. Xi was also described to be supremely realist, driven not by ideology but by a combination of ambition and “self-protection.” Xi is a true “elitist” at heart, believing that rule by a dedicated and committed Communist Party leadership is the key to enduring social stability and national strength. The most permanent influences shaping Xi’s worldview were his “princeling” pedigree and formative years growing up with families of first-generation CCP revolutionaries in Beijing’s exclusive residential compounds. Xi has a genuine sense of “entitlement,” believing that members of his generation are the “legitimate heirs” to the revolutionary achievements of their parents and therefore “deserve to rule China.”

Given this penchant for face-saving gestures, how would Xi’s political fortunes be affected by the coronavirus pandemic? Would the recent outbreaks affect the way in which ordinary citizens, even party cadres and senior party leaders, view him? Most analysts expect Xi to run for an unprecedented third term later this year during the twentieth party congress. A bigger issue for Xi, however, lies in his support base at home. In the absence of democratic elections, this is very difficult to gauge; however, part of the CCP’s operating logic is that instability and chaos are often a sign from Heaven that one has lost the right to rule. Again, this may sound arcane for political observers steeped in secular philosophy, but as one Chinese insider told me, many members of the CCP—while officially atheistic in name—are highly superstitious and believe in all sorts of gods and spirits (xinshenxingui). The coronavirus pandemic and the harsh measures over the past few months have led to many Chinese citizens—and political elites—to question whether Xi is indeed capable to take China to the next stage of its development, and to rival Western countries in terms of material and spiritual prosperity. This raises an even more sensitive question for the Chinese government, which is, would the party sacrifice Xi to save itself? Based on Chinese political history, this is very unlikely unless some kind of factional split takes place within the party. Given that most of Xi’s closest alleged rivals and opponents have been purged, any incipient challenge if it happens would not come from his political opponents within, but from the outside.