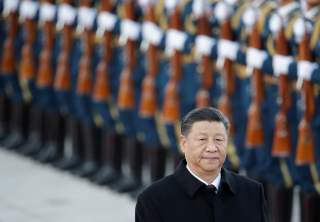 China’s ability to outspend Taiwan in the competition for diplomatic allies should not be mistaken for clever statecraft. The Xi Jinping era has been disastrous for Chinese society, for China’s foreign relations with much of the world, and particularly for cross-Strait relations.

Despite the incomparable importance of the Taiwan issue in Chinese politics, the man lauded by People’s Republic of China (PRC) commentators as the apex product of the Chinese political system’s meritocracy, whose “Xi Jinping Thought” is so rewarding and profound as to deserve mention in the Chinese constitution and frequent study by Chinese citizens, has merely continued the manifestly unsuccessful approach of his predecessors: use a big stick and a rotten carrot.

Beijing has increased its pressure on Taiwan to agree to a settlement of the cross-Strait issue acceptable to Beijing. China has severed the links between semi-official cross-Strait liaison offices. After a brief “diplomatic truce,” Beijing is again working to lure away states that have diplomatic relations with Taiwan, including the Solomon Islands and Kiribati in quick succession. At least two Taiwan nationals are evidently in detention in China for political crimes. China has reduced the flow of commerce benefitting Taiwan and stepped up military air and sea patrols intended to intimidate the island.

Beijing has done all of this to force the Taiwanese to want to be part of China. At the same time, however, Beijing has made the already unpopular prospect of political unification with the PRC even less attractive, most notably through the dramatic increase in political repression inside China since Xi became the paramount leader in 2012.

Xi’s excesses in his country’s relations with the United States have also moved Washington to remove some of the self-imposed restrictions on U.S. engagement with Taiwan, resulting in a stronger U.S.-Taiwan relationship—the opposite of Beijing’s desired outcome.

The main issue in cross-Strait relations for several decades has been managing the gradual “loss” of Taiwan by a Chinese Communist Party government that has unwisely defined the political reintegration of Taiwan as a test of the party’s legitimacy to rule China. The problem is avoiding a decision by Beijing to use military force to prevent Taiwan from permanently closing off the possibility of unification. Yet Taiwanese nationalism, distinct from Chinese nationalism, is growing in Taiwan. Reflective of a long trend, nearly 60 percent of people in Taiwan now identify themselves as “Taiwanese,” while less than 4 percent see themselves as “Chinese.”

Taiwan long ago became de-facto independent and clearly satisfies the criteria for statehood: territory, population, and a government that effectively administers them.  While much smaller entities enjoy unquestioned status as independent states, Taiwan is more populous than two-thirds of the world’s countries and is among the world’s top twenty-five economies. While the Republic of China state that now controls Taiwan previously ruled over mainland China, the CCP government has never ruled over Taiwan.

Based solely on reason and the modern political norm of self-determination, the people residing in Taiwan should decide whether or not their island is politically part of China and which government should rule it.

Unfortunately, because China is a large and consequential country, the CCP has been able to force the international community to accommodate the party’s own domestic legitimacy issue. Having cultivated Chinese nationalism as a strategy of regime survival, Beijing has used that nationalism to practice extortion: the world must accept the “one China” principle, or else the hurt feelings of the mainland Chinese will create irresistible pressure on the Chinese government to go to war.

The “’92 Consensus”—shorthand for the idea that both Taipei and Beijing accept that there is one “China” even if they disagree over whether it is the PRC or the ROC that rightfully rules it—was a useful way of lowering cross-Strait tensions during the ROC presidency of Ma Ying-jeou from 2008 to 2016.  Ma represented the Kuomintang (Nationalist Party, KMT), which fundamentally sees Taiwan as part of China. This predictably changed when the Democratic Progress Party (DPP), which sees Taiwan as not part of China, gained the presidency and a majority in the ROC legislature in 2016.  New president Tsai Ying-wen refused to endorse the 1992 Consensus. Beijing retaliated by imposing the multifaceted policy of coercion against Taiwan that continues today.

Here we encounter the immovable and unbreakable boulder blocking the path to a permanent peace across the Taiwan Strait. The one thing that is politically impossible for any Taiwan president from the DPP to do is to support a description of the cross-Strait relationship which implies that Taiwan is a part of “China.” But on the other side, the insistence that Taipei acknowledges that Taiwan is part of “China” is the one demand on which Beijing cannot compromise.

That limits the utility of the 1992 Consensus to periods when Taiwan is under a KMT administration. Since recent years have established a pattern of regular changes between DPP and KMT ascendancy, periods of cross-Strait calm will at best be temporary.

As if that wasn’t enough, Xi went on to imply that what people in Taiwan already viewed as a terrible deal has gotten worse. Previous versions of “one country, two systems” explicated by Chinese leaders included promises that Beijing would allow Taiwan to keep its own armed forces and its accustomed political institutions. These were left out of Xi’s list of promises.

Subsequent events in Hong Kong have, of course, demonstrated that China is not keeping its promises made to Hong Kong under the “one country, two systems” model.  The significance for Taiwan is that Beijing has so openly failed to refrain from molesting Hong Kong’s system despite knowing that the world, including Taiwan, is watching closely. An important part of the Hong Kong fallout is a boost for the election prospects of DPP candidates in Taiwan’s January 2020 polls, as the DPP feeds off of heavy-handed behavior by China. This compounds the lack of success of Xi’s Taiwan policy.

China seems to recognize the immense disadvantages of resorting to “non-peaceful means” to force unification. But both Xi’s approach to Taiwan and the unintended effects of some of his other policies are undercutting the possibility of better options.  Chinese planners are not likely to find a solution to this problem in their after-hours study of Xi Jinping Thought.