Why Xi Jinping Is Paying a Price for Zero-Covid 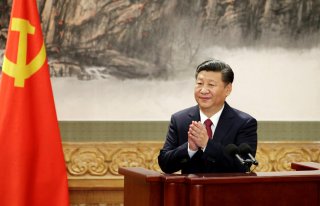 The Chinese Communist Party (CCP) has backed itself into a corner. Its coronavirus control efforts, once largely successful, have outlived their usefulness. Not only is the extreme zero-Covid policy being criticized by Chinese scientists as unsound, but it is also becoming a political liability, too.

Protests erupted across the country in Shanghai, Beijing, Zhengzhou (at a Foxconn plant), and elsewhere. Residents of quarantined residential areas have risen up and broken open the gates. Protesters who were scared to say anything have raised blank white papers. Police in Shanghai were so paranoid that they removed the street sign for Wulumuqi Road, which is named after the city in Xinjiang where a fire killed ten people who were stuck in a locked-down apartment building.

From the start, the Chinese government tried to use its pandemic control response as a propaganda tool for Xi Jinping and the CCP. It tried to take credit for the sacrifices of the Chinese people. I saw it firsthand while I was stationed in Nanjing, China, in January and February 2020, reporting on the outbreak as a freelancer.

The local CCP committees charged with maintaining lockdowns of residential neighborhoods placed signs at checkpoints reading, “Party members take the lead, control the grid, watch the neighborhood, fight the pandemic.” An announcement of new laws posted on the windows of businesses read: “In order to intensely carry out Premier Xi Jinping’s important instructions to control the spread of the new coronavirus pneumonia pandemic in accordance with the law…”

The CCP claimed to be the savior of the people, while the people sacrificed because of the CCP’s edicts. Doctors who sounded the alarm about the virus early were detained. Hospitals called for mask donations, but those first doctors in Wuhan were not allowed to wear masks when treating patients. Individuals heeded the call—over $90 million worth of goods and money had been donated to the Wuhan Red Cross in one week—but the protective gear piled up at warehouses undistributed, some of it appearing to be siphoned off by government officials.

During the first months of China’s lockdowns in 2020, I saw a chef who slept in the back of his restaurant, continuously cooking food for anyone who came while he turned the lights off and pretended his place was closed. I saw every residential community closed off with fences thrown up around buildings, blocking every entrance but the main gates, which were manned with guards who checked IDs and recorded names. These kinds of lockdowns have been in force, on and off, for three years and are still in force in some places.

It has been reported that the protests have finally caused China to relax quarantine measures somewhat. But only somewhat. Residential communities in some districts of some cities have exited lockdown. Some cities have ended the requirement that people present negative test results before using public transportation.

But China still has much more extreme policies in place than almost any other country in the world. China still requires the use of QR health codes to control who can travel. More easing might be coming. Still, China has been nearly one year behind the trend of even the strictest Asian countries, like South Korea.

Why did it take so long for China to ease its lockdown?

After tying the party and the all-powerful leader to the policy, it was nearly impossible for the party to conceive of a way to end it without implicitly admitting—or perceiving itself as admitting—that it was wrong. Zero-Covid became a dogma, like Maoism. The CCP is incapable of allowing dissent or disagreement. Chinese doctors and scientists have long known that many of China’s policies have been ineffective or scientifically untenable, but most were afraid to speak out. In some ways, the protests have done Beijing a favor, spurring the government to move in a direction most health officials already knew was necessary.

Yet there are still some admissions the CCP will be unable to make. China attacked the response of the West, and the United States in particular, so aggressively that they cannot admit the West was right about some things—vaccines, for example. China has not accepted any foreign vaccines, even though the mRNA vaccines developed by American and German companies have proven much more effective than Chinese vaccines. China will risk millions of new infections and deaths when it finally reopens fully just to maintain its propaganda effort against the United States.

The CCP is putting Chinese lives at risk even while approving the use of the BioNTech vaccine for foreign residents.

In a democracy, protests are not an existential threat to the regime. Debate is open and disagreement with government policy is not considered subversion. But when a regime makes the party and state synonymous, and makes the party’s leader the face of the government and country, it is impossible for them to be disentangled. China’s Covid policy was said to be Xi Jinping’s Covid policy.

There is no room for nuance. China found it hard to say that while Xi’s policy might have been effective in the first year, things had changed. The policy was continued for too long. It became political.

The CCCP backed itself into this corner when it insisted on taking full credit for China’s initial success at slowing the spread of the virus. Now it must take the blame for the inevitable spike that will occur when the country eventually opens up—or for the increasingly dangerous unrest it will face if it does not.