Will the ‘Bulava’ Submarine-Launched Missile ‘Save Russia’? 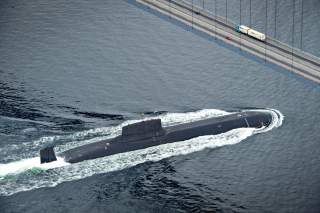 As the Salisbury saga continues and the world prepares for the drama and humanitarian calamity of the Idlib battle in Syria, leading journalists and scholars alike remain seemingly oblivious to the most concrete and ultimately dangerous manifestations of the new Cold War between the United States and Russia. These are, of course, the hundreds of billions of dollars spent on new generations of strategic nuclear weaponry in both the United States and Russia, as well as the increasing tendency to deploy these weapons in destabilizing patterns of operations.

A window into Russian thinking on this weaponry is revealed in a book I picked up last year in Vladivostok. The 2017 work, by the author Alexander Shirokorad, concerns Russia’s strategic interests in the Arctic. A major theme of the book is submarine activity in the sensitive polar region. In his book, Shirokorad reviews the history of Russian (and Soviet) nuclear ballistic-missile submarine (SSBN) operations. He notes with evident pride that on August 6, 1991, that the submarine K-407 successfully launched its full complement as a salvo [был залпом запущен весь комплемент] of sixteen submarine-launched ballistic missiles (SLBMs) in just fourteen seconds. That operation was called “Behemoth 2 [бегемот-2].”

After explaining this history, however, Shirokorad goes on to make an especially emblematic observation. He says that during 1991, there was an average of less than one single Soviet SSBN on deterrence patrol at sea for the year. Reflecting on that shortfall, he comments, “What surprises me is just a single point, why is Mikhail Sergeivich Gorbachev still a free man?” In other words, to a certain group of Russian strategists, the idea that their nuclear deterrent could be weakened to that extent amounts to an unacceptable failure and perhaps an act of treason too.

Those very same strategists might well have been relieved by the May 2018 launch of another significant salvo of SLBMs from a Russian SSBN in the high north. Indeed, it is in that light that one might consider an article that recently appeared on the website of Military Review [Военное Обозрение] under the intriguing, if disturbing title: “In place of thousands of warheads: will the ‘Bulava’ (SLBM) save Russia [Вместо тысячи боеголовок: спасет ли Россию ‘Булава’]?” begins with the assessment that many “were in fact naïve to believe that Russia and the United States would curb their nuclear arsenals as they did half a century ago [На деле же наивно полагать, что Россия и Соединенные Штаты будут меряться своими ядерными арсеналами, как это было полвека назад.].”

Two disturbing trends are outlined. It is observed that “The capabilities of the countries have fundamentally diverged . . . [Возможности стран принципиально отличаются]” and this is obvious from comparing military budgets in 2017, wherein this Russian analyst suggests that U.S. spending is roughly ten times that of Russia. Moreover, the author notes the divergence in military capabilities is more visible on a tactical level than on the strategic level. It is noted that “America’s nuclear shield [американский ядерный щит]”—missile defenses in other words—are “obviously more modern, and even more important – better protected.”  In assessing the strategic balance, this Russian military analyst gives high marks to the U.S. Navy’s ballistic-missile submarine force. The author explains that the fourteen Ohio-class SSBNs of the American sea-based deterrent are without peer in the world regarding stealth. Moreover, it is suggested that the solid-fueled Trident II is likewise the most capable SBLM system in the world. The author concedes that these systems are not new and require replacement, and it is noted that the U.S. Navy’s Columbia SSBN development program has a long way to go still.

According to the analysis, “Russia has, in theory, adequate forces for a guaranteed retaliatory blow [В принципе, России для гарантированного ответного удара хватило]” from its land-based forces in silos and mobile platforms. However, the author maintains that these systems are quite vulnerable. Even the rail-based system “Barguzin” is said to “also have inadequacies connected to vulnerability [тоже имел концептуальные недостатки, связанные с уязвимостью.].” For the author, there is no visible alternative to maintaining Russia’s nuclear triad.

Yet, there are substantial problems with the existing Russian strategic submarine force. In particular, the author maintains that Russia’s Project 667 Delta-class [Дельфин] SSBNs or so-called “boomer” submarines are now obsolete. “The [Project 667] ‘Dolphin’ is far from the quietest submarine.” The author continues: “It is believed that an old American Los Angeles-class can track a Project 667 submarine in the Barents Sea at a distance of up to 30 km. One has to project that for a ‘Virginia’ or ‘Seawolf’ class, that figure would be even better [Считается, что старая американская лодка типа ‘Лос-Анджелес’ обнаруживает подлодку проекта 667БДРМ в Баренцевом море на дистанции до 30 километров. Нужно полагать, у ‘Вирждинии’ и ‘Сивулфа’ данный показатель будет еще лучше].”

Still, the problem gets worse from the Russian perspective. Each Project 667 is reported to carry sixteen R-29 ‘Sineva’ SLBMs and these are liquid-fueled rather than solid-fueled. Not only is the equipment for servicing liquid-fueled missiles reported to be very noisy, but apparently “working with the toxic components of the fuel increases the risk of an accident, which could lead to a tragedy on a global scale.”

In discussing Russia’s new Bulava SLBM that formally entered service in June 2018, the author does point out a few other positive aspects of the new missile besides the obvious advantage of solid fuel. With each missile carrying six warheads to a distance of eleven thousand kilometers, the Bulava also has increased survivability [живучимостье] since it is designed to decrease the missile’s vulnerability to detection and destruction in the launch phase. Yet, it is explained that the missile’s characteristics do not compare favorably to the American Trident II and this is for the “more trivial reason – the banal lack of resources for a more capable missile [более тривиальная причина – банальное отсутствие средств на более мощную ракету].”

Furthermore, the author relates the checkered past of the Bulava missile in that of thirty or so test launches since 2005 seven have been reported as failures. However, the point is also made that the Bulava’s predecessor also had a high failure rate during development and the problems had been successfully corrected. Such “childhood maladies” [детские болезни] have been dealt with and Bulava will “form the basic naval component of Russia’s current nuclear triad.” In the end, the author additionally underlines that there is dynamism in the current redevelopment of certain land-based Russian nuclear systems, such as the “Avantguard” [Авангард] project.

Some American naval and nuclear strategists may survey this analysis and come away from it in good cheer. Evidently, at least some Russian military analysts have high regard for American naval and nuclear systems. Moreover, the above analysis seems to be substantially pessimistic and appears to illustrate a Russian naval nuclear component under substantial stress. From the traditional viewpoint of “competitive strategies,” keeping the Kremlin off balance and under significant resource pressure counts as a victory in the minds of many in Washington.

However, a more enlightened perspective may ask whether increasing Kremlin anxieties about its nuclear triad is really in the American national interest. Does Washington want to see over-stressed Russian submarine and missile silo commanders with their twitching fingers on the ultimate trigger? The Russian author of this article claims that U.S. submarines could be active in the Barents Sea operating against Russian SSBNs. If true, then such practices could once again raise the dark Cold War specters of misperception, escalation control, pre-emptive attack, and the possibility of catastrophic accidents from the all too real scenario of an undersea collision.

In the whirlwind of Washington politics, it is tempting to get swept away by the next twist of a British spy caper or a turn in the long “Russian influence” investigation in the neck-high muck of Ukrainian politics. However, it should not be forgotten that all these machinations feed dangerously into a doomsday machine, upon which hangs the fate of our world. That machine also happens to consume vast sums of Americans’ national wealth that could be put to far more constructive uses.

Why Syria, Russia and China All Fear the Navy's Ohio-Class Guided Missile Submarine