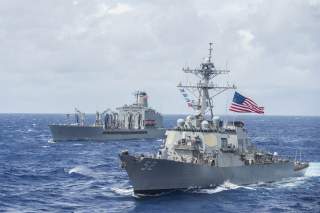 Over the last decade, China has used its Nine-Dash Line to claim sovereignty over virtually the entire South China Sea. The country has backed up its sweeping sovereignty claims with a series of increasingly aggressive seizures of national features and by constructing artificial islands.

The Obama administration responded by authorizing three putative Freedom of Navigation Operations, known as FONOPs, which actually made matters worse. That is because during the three operations U.S. ships simply transited through the waters that China has claimed as its territorial seas as if quickly making “innocent passages” in and out of the area. There was no lingering, no maneuvering, no exercises and the fire-control radars on the ships were off—just as if they were steaming through the waters off Shanghai. That effectively conceded a slice of the South China Sea to Chinese sovereignty.

By contrast, in May, the USS Dewey entered within twelve nautical miles of the Mischief Reef in the Spratly Archipelago. The Arleigh Burke–class guided missile destroyer sailed through the area in a zigzag pattern, and conducted a “man overboard” rescue drill. In other words, it conducted an exercise in a routine high-seas operational mode.

The People's Liberation Army Navy (PLAN) tried to intercept and “expel” the naval destroyer, but its crew ignored the Chinese ships and continued with the peaceful exercise of navigational freedoms. The May operation seemed to indicate that restrictions on the Navy’s conduct of FONOPs had been finally lifted and that meaningful challenges to China’s dangerous overreach in the South China Sea were underway. Most observers, here and abroad, were relieved, but not all of them believed that the USS Dewey had conducted an official FONOP.

In Lawfare last month, Professors Peter A. Dutton and Isaac B. Kardon deliver a sweeping theoretical challenge to the Navy’s FONOPs program, including to the widely hailed operation conducted by the USS Dewey.

"But did the Dewey actually conduct a FONOP? Probably—but maybe not," the authors state in their analysis. "Nothing in the official description of the operation or in open source reporting explicitly states that a FONOP was in fact conducted. Despite the fanfare, the messaging continues to be muddled. And that is both unnecessary and unhelpful."

Why such a harsh judgment given that the USS Dewey conducted the most straightforward FONOP in the South China Sea over the past two years? The description is all the more mystifying when the authors make these statements in their article:

“The man overboard drill is the clearest suggestion that an intentional—and approved—FONOP occurred.”

“The Dewey was plainly operating in a mode consistent with high seas freedoms, and not in the ‘continuous and expeditious’ manner required of innocent passage through a claimed and accepted 12 nm territorial sea.”

One is tempted to speculate that the authors believe that the Navy could only validate the FONOP by effectively announcing: Now hear this! This was a FONOP. Or perhaps the State Department needs to send a démarche to China, which is something that is often done during formal FONOPs. But sometimes actions speak louder than legalisms.

Interestingly, the article makes a contradictory argument: “Traditionally, FONOPs are operationally minimal and diplomatically low-key. The point is not to menace the offending state with gunboats or to upstage them with publicity.”

What seemed to be most troubling to the authors about the USS Dewey operation was not that its message was muddled, but that it was all too clear: “FONOPs are not primarily designed to send targeted signals of resolve, reassurance, commitment, deterrence, or any other of the many political-military signals the United States sends through its naval operations.”

The authors seek to make much of the distinction between a FONOP being “a specialized tool to protect discrete legal norms that underpin the order of the oceans” and “the general exercise of routine navigational freedoms.”

But the Defense Department’s own FONOPs report states that the two concepts are part and parcel of the same Navy mission: "Since the founding of the nation, the United States has asserted a vital national interest in preserving the freedom of the seas, calling on its military forces to protect that interest."

The department report explicitly notes the seamlessness of ensuring navigational freedom by challenging “excessive maritime claims—that if left unchallenged, could impinge on the rights, freedoms, and uses of the sea and airspace guaranteed to all States under international law.”

In the authors’ telling, there are pure FONOPs, pure routine navigational freedom operations and mixed operations.

"According to the official department description, the fleet may also conduct 'FON-related' activities, where a freedom of navigation challenge is a secondary effect of an operation with a different primary purpose," the authors state.

Still, the fact that all three categories of naval operations serve the larger purpose of protecting freedom of the seas does not seem to alleviate the authors’ concerns.

“The conflation of routine naval operations with the narrow function of a formal FONOP needlessly politicizes this important program, blurs the message to China and other states in the region, blunts its impact on China’s conduct, and makes the program less effective in other areas of the globe,” the authors state.

They correctly identify the “confused and confusing signaling that followed the FONOP undertaken by the USS Lassen” near the Spratly Islands in 2015 as raising public doubts about “American commitment and resolve” in the South China Sea. However, that official and public confusion was not caused by the perceived “conflation” issue, but by the decision of Washington policymakers to take a minimalist approach in addressing China’s challenging behavior.

Instead of allowing the Navy to conduct a normal, unconditional FONOP in that instance and on two other occasions, the military service was instead reduced to carrying out innocent passage through the contested area, which failed to challenge China’s assertion of sovereignty.

The USS Dewey was allowed to conduct a proper FONOP. But the authors’ objections to the FONOPs program seem to go deeper. In fact, the title of their article is: “Forget the FONOPs—Just Fly, Sail and Operate Wherever International Law Allows.” They argue that a FONOP should not be done at all unless China formally states its claim—even when it seizes and occupies land features or creates artificial islands:

"FONOPs should continue in routine, low-key fashion wherever there are specific legal claims to be challenged (as in the Paracel Islands, the other disputed territories in the [South China Sea]); they should not be conducted—much less hyped up beyond proportion—in the Spratlys. Instead, the routine exercise of freedom of navigation is the most appropriate way to use the fleet in support of U.S. and allied interests."

The authors’ rationale for avoiding formal FONOPs near the Spratly Islands suggests that China’s aggressive tactics have already worked to deter U.S. Navy operations in increasing areas of the South China Sea.

In consequence, we should welcome the apparent decision not to conduct FONOPs around Scarborough Shoal—where China also never made any clear baseline or territorial sea claim. If U.S. policy makers intend to send a signal to China that construction on or around Scarborough would cross a red line, there are many better ways than a formal FONOP to send that message. One such political signal that was well sent is the deployment of Third Fleet forces from San Diego to the Western Pacific to augment the U.S. Navy’s Seventh Fleet forces resident in Asia . . . The group conducted routine operations in the South China Sea and is now conducting exercises in the Asia-Pacific with allies and partners to demonstrate American commitment and to build partner combat capabilities . . . The Chinese foreign ministry acknowledged the activity without protest. These vessels were carrying out routine naval operations to send a clear signal to regional states about U.S. capabilities and intentions. This was a clear message, clearly received.

But the capabilities of the U.S. Navy are not in question; it is the intentions of policymakers in Washington that are in question. The issue is not only where the Navy is operating in the South China Sea, but also where it is not operating, which is why Beijing does not protest that particular activity at this time.

The authors’ argument begs this question: Are any of the routine operations and exercises that are being conducted by the Third Fleet occurring within twelve nautical miles of natural or manmade land features that China claims in contravention of the UN arbitral tribunal’s decision?

If the answer is yes, but the Navy is minimizing publicity to avoid offending China, then the facts would be known to the participating allies and partners, and to China. The political cost of such a diplomatic wink-and-nod must be weighed by policymakers. All regional states need to know if the United States is standing up to—or acquiescing in—China’s increasing assertiveness.

If the answer is no, then that completely undermines the authors’ assertion that there are “better ways than a formal FONOP to send a signal to China that construction on or around Scarborough would cross a red line” or their assertion that the “consistent practice of free navigation, not the reactive FONOP, is the policy best suited to respond to Chinese assertiveness in the SCS.”

As the authors state, “routine naval operations perform a far broader set of political and strategic functions . . . [that] must be clear if their purposes are to be achieved.”

Ominously, Beijing and others could well conclude that for fear of provoking China, the U.S. Navy has put the twelve nautical miles areas around China’s claimed territories in the Spratly Islands off limits to either a formal FONOP or routine Navy freedom of navigation operations. That would be “a clear message, clearly received” but not a good one for the cause of full freedom of navigation.

Image: The guided-missile destroyer USS Barry (DDG 52) and the oiler USNS Big Horn (T-AO 198) break away from a formation with ships from Carrier Strike Group 5 and Expeditionary Strike Group 7 following a photo exercise to signify the completion of Valiant Shield 2016.​ Flickr / COMSEVENTHFLT