Will America Ever Learn from Its Middle East Mistakes? 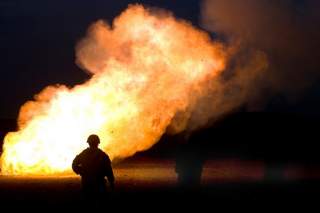 Even before President Obama addressed the nation on September 10 to promote his strategy to defeat ISIS, U.S. planes were already pounding targets in Iraq. The U.S.-led air war will likely soon expand into Syria, and there are growing calls to put American boots on the ground to enhance this new military intervention’s prospects of success. Hawkish types across the political spectrum warn that ISIS poses a dire threat to the security of the United States and cannot be ignored—even though U.S. intelligence agencies contend there is no evidence the organization has formulated plans to attack the American homeland.

There is ample reason to wonder whether Congress and the American people are being stampeded into supporting a new war in the Middle East without considering the possible adverse consequences. Citing the admittedly odious behavior of ISIS is not sufficient reason to launch another military crusade. Without a doubt, ISIS commits horrific acts, exemplified by the publicized beheadings of two American journalists and a British humanitarian-aid worker. But if barbaric decapitations were an adequate casus belli, we would need to go to war against Saudi Arabia. That regime has beheaded at least forty-six individuals in 2014 alone—many of them for nonviolent offenses.

But the principal reason to avoid rushing into another Middle East war is the dismal record of our previous interventions. Each time the United States has meddled in that turbulent region, it seems to have made the situation a bit worse (and sometimes a lot worse) than it was before. A look at the outcomes of American actions just since the beginning of the 1980s confirms that sobering conclusion.

The Reagan years saw the United States sending thousands of troops into the middle of Lebanon’s civil war (largely a Christian-Muslim struggle) and tacitly backing Iraqi dictator Saddam Hussein’s invasion of Iran. The Lebanon venture not only failed to solve that country’s bitter internal divisions, it intensified Muslim animosity toward the United States there and elsewhere. That ill-advised intervention culminated in the suicide bombing of the Marine barracks in Beirut, which killed 241 U.S. military personnel. President Reagan at least then had the belated wisdom to extricate the remaining American forces.

Unfortunately, Washington persisted in its policy of using Saddam to blunt the supposed contagion of the Iranian revolution. The United States channeled aid to Iraq through third parties, primarily Saudi Arabia and Kuwait, and the cozy bilateral relationship was epitomized by an infamous photo of special presidential envoy Donald Rumsfeld shaking hands with Saddam in Baghdad. U.S. involvement deepened when the Navy was tasked with protecting Iraqi ships in the Persian Gulf that had been reflagged as Kuwaiti vessels. Washington’s tilt toward Iraq in its bloody war of aggression against Iran not only deepened Tehran’s antagonism toward the United States, it did not earn any gratitude from Saddam.

That point became evident in August 1990, when Iraq invaded and occupied its one-time ally, Kuwait. Washington’s initial healthy inclination was to stay out of the conflict, with Secretary of State James Baker reportedly quipping that only the name on the gas station had changed. But that course soon altered sharply, in part because of pressure from European allies, including British prime minister Margaret Thatcher, who admonished President George H. W. Bush “not to go wobbly.” The United States soon rushed troops to the region, ostensibly to protect Saudi Arabia, even though there was no credible evidence that Saddam planned to expand his conquest beyond Kuwait—a territory that Iraq had claimed long before he came to power.

Eventually, the United States committed some 500,000 troops to a military campaign to expel Iraqi forces from Kuwait. Washington subsequently encouraged Iraq’s Kurdish and Shiite populations to rise up against Saddam’s Sunni dictatorship. The principal effect of the U.S.-led intervention was to enable the Kurds to establish a de facto independent state, which the United States protected by enforcing a no-fly zone over northern Iraq, thereby preventing Baghdad from suppressing the secessionist rebellion. Washington’s actions badly weakened Iraq as a strategic counterweight to Iran—something that seemed counterproductive, given Washington’s obsession with undermining Iranian influence.

The United States was not done damaging Iraq. What Bush I had started, Bush II dramatically escalated, waging a war that ousted Saddam’s Baathist regime. But that move further destabilized Iraq and opened the floodgates to radical Islamic forces. Saddam was assuredly a corrupt, thuggish ruler, but he was a staunch secularist who had no time for religious zealots. The Bush administration’s crusade to transform Iraq into a united, pro-Western democracy instead produced a fractured, chaotic entity characterized by bloody Sunni-Shiite conflicts and the expulsion of one-third of Iraq’s once-vibrant Christian community. The rise of ISIS is only the latest plague to afflict Iraq after Washington’s helpful ministrations.

It has become abundantly clear that U.S. policy makers learned little or nothing from the Iraq debacle. The Obama administration worked to overthrow Libya’s Muammar Qaddafi—once again with the goal of turning the country into a stable democracy. Instead, Libya became the playground for dozens of armed militias, many of whom appear to have decidedly radical Islamist leanings. The place is now an anarchic mess.

Syria may face an equally unpleasant fate. Washington was determined to help supposedly moderate, pro-democracy rebels remove the repressive Bashar al-Assad. Troubling evidence that the insurgents were sponsored and funded by Saudi Arabia and Qatar (nations not known for their devotion to secular democracy) should have been a warning signal that the rebels might be unsavory. Indeed, many of them became the core of ISIS and joined with like-minded extremists in neighboring Iraq when the organization launched its offensive and conquered wide swaths of territory.

That depressing track record needs to be kept firmly in mind as the usual suspects hype the ISIS threat and insist that the United States “cannot stand by and do nothing.” Washington has been “doing something” in the Middle East for decades—with appalling results. It is a triumph of hope over experience to expect that this time the outcome will be different. The American people should demand that hawkish proponents of a new military crusade defend the record of the previous applications of that strategy. Otherwise, we face the prospect of expending even more blood and treasure while further destabilizing the region and creating more enemies.