Will America Ever Leave Afghanistan? 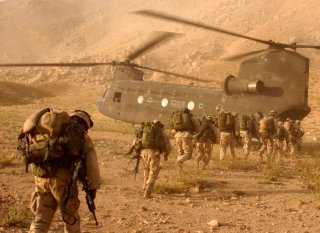 Since the war in Afghanistan formally ended at the close of 2014, hardly a week goes by without another report of the Obama administration considering revising its troop withdrawal timeline or that the current mission in Afghanistan is far from its putative non-combat advisory role. Indeed, just this weekend, during a surprise trip to the country, Secretary of Defense Ashton Carter said the administration is considering slowing down its troop withdrawal timetable.

Yet, during his State of the Union address, President Obama noted that Afghan forces “have now taken the lead” and touted America’s support for Afghanistan’s so-called “first democratic transition.” As the combat mission in Afghanistan ended last year, the president lauded the effort, asserting that the international coalition has “helped the Afghan people reclaim their communities, take the lead for their own security, hold historic elections and complete the first democratic transfer of power in their country's history." The administration has continually sought to portray post-2014 U.S. involvement in Afghanistan as an effort to train and advise Afghan forces to take the lead in securing the newly democratic Afghanistan. While the Obama administration publicly touts the success of the Afghan mission and the end of the war, deliberations over the contours of the post-2014 U.S. presence continue. All of this dissembling begs the question: is America’s longest war really over?

All indications suggest that it is not. For example, drone strikes have continued to target militants. Similarly, the New York Times reported earlier this month that there has been a significant uptick in night raids by American Special Operations forces in recent months; it’s difficult to imagine how these endeavors could be labeled anything other than “combat operations.” During testimony on Capitol Hill on February 12, U.S. General John Campbell, the top American commander in Afghanistan, told lawmakers that he wanted “greater flexibility” to keep more troops in the country. Similarly, on February 10, the Washington Post reported that the Obama administration was “considering slowing its planned withdrawal from Afghanistan for the second time.” Just a week prior, Carter told the Senate Armed Services Committee that he would consider revising (read: slowing down) the troop drawdown if conditions on the ground degrade. And while the administration considers slowing down the drawdown of the 10,600 U.S. troops in Afghanistan, tens of thousands of civilian contractors remain in the country to train and advise Afghan forces.

President Obama announced the drawdown plan in May 2014, prior to the prolonged electoral dispute between Afghan candidates Ashraf Ghani and Abdullah Abdullah. The election controversy delayed the finalization of a Bilateral Security Agreement (BSA), which former Afghan President Hamid Karzai had refused to sign. This delayed the implementation of the training mission and prevented firm troop commitments from NATO members. Last fall, after the BSA was finally signed, President Obama approved Pentagon-requested rules for 2015 combat operations – despite the BSA supposedly outlining a non-combat mission. The rules allowed for U.S. military leaders to approve combat operations using ground forces, manned aircraft and drones for counter-terrorism operations against al-Qaeda and other terrorist groups, to protect U.S. forces, and to assist Afghan forces. These new rules of engagement clearly contradicted President Obama’s statement from May 2014, when he noted that “America’s combat mission will be over by the end of this year.” In December, then-Secretary of Defense Chuck Hagel announced that the United States would be keeping as many as 10,800 troops in the country.

To be sure, Afghanistan’s troubled state has played a role in the administration’s ever-wavering plan for withdrawal. Indeed, on the ground, the situation in Afghanistan dramatically deviates from the administration’s positive narrative. Nothing belies the notion that Afghanistan is stable and secure today more than the ceremony conducted in Kabul to mark the end of the International Security Assistance Force mission: due to Taliban threats, the ceremony had to be held in secret. According to the United Nations, 2014 was the deadliest year on record for non-combatants in Afghanistan, with at leaset 3,188 civilians being killed. What is more, the International Committee of the Red Cross (ICRC) recently reported that it had removed twice as many dead combatants – including both Afghan forces and militants – from battlefields as it had in 2013. In October 2014, the Wall Street Journal reported that – with 4,380 Afghan soldiers and policemen killed as of October– 2014 was also the deadliest year for Afghan forces during the 13-year war. All in all, 2014 was a bloody and chaotic year for Afghanistan.

Meanwhile, all the talk about Afghanistan’s “first democratic transition of power” omits the protracted, slapdash process that led to Ghani and Abdullah agreeing to share power following extensive pressure from both President Obama and Secretary of State John Kerry. The June 14 presidential run-off election between Ghani and Abdullah was marred by fraud on a massive scale, with some reports suggesting as many as 2 million ballots (of the 8 million cast) were potentially invalid. Four months after Ghani and Abdullah agreed on a power-sharing deal that gave Ghani the presidency and created a CEO position (essentially Prime Minister) for Abdullah, the Afghan parliament rejected 17 of Ghani’s 25 cabinet nominees. With the parliament now on recess, Ghani will have to wait until the end of March to submit a new slate of nominees, leaving Afghanistan without ministers for several key posts, such as defense minister. And while the security and political situations continue to teeter on the brink of catastrophe, Afghanistan has become a narco-state with a floundering economy. With rampant corruption, high unemployment (particularly among the youth), the burgeoning opium trade, and the dire security situation, Afghans are incredibly anxious over the viability of the unity government at a time when the country needs good governance more than ever.

The February 10 report on the White House’s reconsideration of its withdrawal plan coincided with its announcement that it would be seeking formal authorization for its already five-month long war against the Islamic State, a move that certainly overshadowed the reports of a revised, slowdown of troop withdrawal from Afghanistan. While supporters of a continued presence in Afghanistan argue that the troop drawdown should be conditions-based, the question remains what exactly can be accomplished? What specific conditions can be reasonably expected? The U.S-NATO coalition has not been able to secure such conditions after 13 years of war, so why should we expect such success with a pared-down troop presence?

The spike in violence during 2014 has led to abject humanitarian conditions for millions of Afghans. According to the ICRC, “countless hardships, including large-scale indiscriminate attacks and increasing difficulties reaching health care, are among the grim realities facing the war-weary population. With no end in sight to the violence, there are fears conditions could get even worse this year [2015].”

A revised drawdown will do little to nothing to ameliorate these conditions. Remarkably, the United States has spent more on reconstruction in inflation-adjusted dollars during its 13 years in Afghanistan than it did on the Marshall Plan, which helped rebuild Europe after World War II. The United States can expect very little return on its investment in Afghanistan, particularly in the short term. While the administration considers slowing its troop drawdown and hawks on Capitol Hill and in the media call for a conditions-based withdrawal, it is time to look beyond military solutions to Afghanistan’s problems, formulate a new strategy for bringing peace to Afghanistan, and bring America’s longest war to a true close.

Adam Gallagher is a writer focusing on U.S. foreign policy in the Middle East and Afghanistan. He is a senior writer for Tropics of Meta and can be followed on Twitter @aegallagher10.