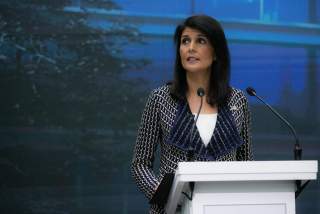 In the lead-up to Ambassador Nikki Haley’s speech at the Graduate Institute of Geneva last week, some media outlets speculated that the former South Carolina governor would raise the prospect of the United States exiting the United Nations Human Rights Council. “The United States is expected to signal on Tuesday that it might withdraw from the United Nations Human Rights Council unless reforms are ushered in including the removal of what it sees as an ‘anti-Israel bias,’” reported Reuters on the eve of Haley’s address. Ultimately, the dramatic predictions surrounding the speech did not materialize. While the American ambassador to the UN chided the council for its focus on Israel and allowing nations with poor human-rights records to gain leadership positions, she did not make the expected ultimatum.

Haley’s more restrained stance caused human-rights groups to breathe a sigh of relief. The talk surrounding American disengagement from the council sufficiently alarmed organizations such as Human Rights Watch and Human Rights Campaign that they released statements advising against the move. Consequently, they welcomed Haley not raising the possibility of such an action in her speech. Rob Berschinski, senior vice president for policy at Human Rights First, told the National Interest, “The historical record clearly shows that leaving the Council would be of no benefit to the United States, so we were glad to see that the new administration is willing to put in the hard work necessary to pursue positive change, rather than simply walking away.”

Although the reports on the contents of Haley’s speech turned out to be overblown, they were not unjustified. For months, the Trump administration teased the possibility of pulling out of the United Nations Human Rights Council. In a March letter to a group of human-rights groups, Secretary of State Rex Tillerson stated that the United States would reconsider its role on the council if adjustments were not made concerning the way council treats Israel and determines membership. That same month, Ambassador Haley, echoing her president’s tone, slammed the UN Human Rights Council as “so corrupt” and warned that “the beauty of this administration is, all bets are off” in front of a New York audience. Just a few days before her speech in Geneva, Haley penned an op-ed piece for the Washington Post, accusing the council of serving as “a showcase for dictatorships that use their membership to whitewash brutality.”

The administration’s seeming fluctuation on this issue is not simply a reflection of a government still struggling to find its footing on many international issues. The debate over whether the United States should participate in the Human Rights Council has vexed policymakers in Washington for over a decade. When the council was first created in 2006 to replace the widely discredited Human Rights Commission, the Bush administration opted not to join. According to Zalmay Khalilzad, former U.S. ambassador to the United Nations, the main sticking point for U.S. officials was that the council was “too focused on Israel and not enough on other egregious human rights violators.” Instead of joining, the United States sought to encourage other countries with strong human-rights records to participate, Khalilzad explained.

The Obama administration adopted a different strategy. In 2009, the United States proclaimed that it would reverse its policy of abstaining from council membership. Administration officials did not have a wildly more positive assessment of the council than their predecessors. Rather, they believed that although the council was far from perfect, the United States could steer it in the right direction by becoming an active participant. Unsurprisingly, the Obama administration occasionally butted heads with the Human Rights Council, particularly when it came to Israel. In May 2015, Secretary of State John Kerry complained about the amount of attention the council dedicated to scrutinizing Israel’s human-rights record, asserting that this emphasis “risks undermining the credibility of the entire organization.”

As an overview of recent history shows, the relationship between the United States and the Human Rights Council is far from a fixed thing. With the famously unpredictable Trump administration, there is no reason to expect that to change. Clearly, the administration prefers promoting reform from within rather than critiquing the council from outside. In her Geneva speech, Ambassador Haley declared that “America does not seek to leave the Human Rights Council. We seek to reestablish the Council’s legitimacy.” At the same time, it is not clear how the administration will react if its requests are not sufficiently accommodated. When the National Interest contacted the State Department seeking to clarify what sort of response the United States would take if its advocated changes are not implemented, a spokesperson responded that they had nothing new to add.

Thus, while exiting the council is not on the agenda, it does not appear completely off the table either. Should the Trump administration reverse itself on this issue, the outcome’s consequences could be contrary to U.S. objectives, warn human-rights advocates. “The UN Human Rights Council is not without its flaws, and its membership is frequently under scrutiny,” admits Jane Connors, international advocacy director for law and policy at Amnesty International’s office in Geneva. However, she also stresses, “During the time the US has been on the Council it has been the first intergovernmental body to address Syria and has been strong on situations such as South Sudan and Burundi.”

Even some former Bush administration officials advise against leaving the council. Mark Lagon, who was deputy assistant secretary in the Bureau of International Organization Affairs at the State Department under President Bush, argues, “If you want better members to run for the council, to stand up in the elections and beat the worst autocracies, then it helps that the United States runs itself.” On the council’s contentious relationship with Israel, Lagon contends that “it will be worse, immensely worse if the United States is not there improving the situation.”

For now, however, the Trump administration will likely perpetuate its predecessor’s approach of engagement with the council. In promoting its desired changes, there are several things the United States Mission to the United Nations can do. Rob Berschinski of Human Rights First recommends that the administration cooperate with like-minded partners in pushing for contested ballots and proactively recruit countries with better human-rights records to run for council seats. Similarly, Louis Charbonneau, United Nations Director at Human Rights Watch, urges the United States to work together with other nations “to end the backroom deals on closed voting slates and ensure that the elections are always competitive,” thereby making it more difficult for perennial human-rights violators to win council seats merely due to a lack of other viable candidates.

For all her tough talk, will Haley actually follow through?