Will America Wage War with a Nuclear-Armed North Korea? 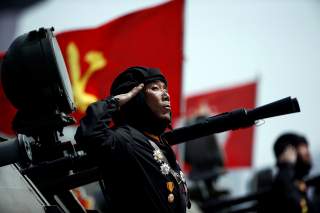 It is increasingly clear that North Korea is driving toward a nuclear-tipped intercontinental ballistic missile (ICBM) which could strike the U.S. homeland. A central question for war and peace in East Asia, then, is how the Americans will respond if or when North Korea achieves this capability.

History suggests a tough American response. Major strategic changes tend to provoke an American effort. In 1962, the Soviet placement of nuclear missiles in Cuba provoked the Cuban Missile Crisis, and the U.S. response brought the world to the brink of nuclear war. Rather than reading the Cuban missiles as Soviet equality with the U.S. ability to strike the Soviet homeland (as the Kremlin read the move), the Kennedy administration read the emplacement as a major challenge that must be rolled back, even at the risk of going to war.

It is easy to imagine a similar American response to a North Korean nuclear ICBM. The North is practically a comic-book villain in American popular opinion and culture. In the last few years, North Korea invaded the United States (twice), captured the White House and produced a take-over-world Bond villain. In the war-scare of this spring, 53 percent of Americans supported striking North Korea to stop its nuclear program, even though North Korea does not even have the ability to strike the United States now. It is easy to see that already-majoritarian number rising as a North Korean ICBM comes into view.

Two other examples leap to mind: In 1941, the Japanese surprise attack on Pearl Harbor ignited a massive American military effort that ended with nuclear attack on Japan. Similarly, the 9/11 surprise attack led to enormous, still continuing American military exertion in the Middle East. A North Korean nuclear capability to strike the U.S. homeland might well be read as giving it just such a surprise attack capability given how dismally Americans view North Korea (86 percent unfavorability). A North Korea capable of nuking the U.S. homeland would almost certainly be read by hawks in Congress, neoconservatives and much of the public as a major threat, possibly justifying preventive attack.

Learning to Live with a North Korean Nuclear Weapon

I have previously argued that North Korea probably does not want to attack the United States. Its officials have repeatedly told the world that it seeks nuclear weapons to prevent American-led regime change on the model of Iraq or Libya. Indeed, the United States is a pretty obvious threat to the North Korean leadership. The United States has sought to isolate North Korea for decades, threatened it with a major war in 1994, placed it on an “axis of evil” in 2001, led the sanctions charge in the ensuing years, and so on. It is not, therefore, surprising that North Korea has sought nuclear weapons like other various rogue nations, such as Hussein’s Iraq, Iran, Syria, Qaddafi’s Libya and apartheid South Africa.

In each case, an isolated, beleaguered regime considered the world’s ultimate weapons in pursuit of ultimate security: no country will attack you, no matter how awful you are, if you can credibly threaten nuclear retaliation. That logic is practically unassailable, however loathsome we might find the states pursuing these weapons. The difference between North Korea and these other horribles is that Pyongyang has actually gotten to a nuke. No other rogue has; only nine states—the United States, Russia, China, France, Britain, Israel, Pakistan, India and North Korea—have hurdled this high bar.

So nuclear weapons are a wise choice for North Korea’s elite, no matter what we think of the regime. It seeks them for the same reason all rogue nations do—regime security. We can insist, as we do, that we will never recognize North Korea as a nuclear-weapons state. But it is, whether we like it or not. We also probably cannot stop the North Korean march to a nuclear ICBM, barring a huge, risky air campaign that might not even work and would be practically indistinguishable from a war.

So we are facing a countdown, a ticking clock of sorts, that ends with a verified North Korean ability to strike the continental United States with a nuclear weapon, possibly a hydrogen bomb, atop an ICBM. No really knows when the North Koreans will get there. They lie so much that I am loathe to believe their claims that this is imminent. Other, more credible numbers thrown around suggest 5–10 years. But whenever it might be, it is almost certainly coming. Constant nuclear and missile testing, plus the regime’s own words, suggest that it is aiming for a nuclear ICBM with the explicit purpose of threatening the U.S. homeland.

So what to do? Hopefully we can delay the program. Cyber action might slow it down, as it did the Iranian program. Missile defense helps too. And China might finally take this seriously and realize that clamping down on North Korea is wiser than risking a panicked American overreaction when North Korea breaches this barrier. But given China’s almost willful obtuseness on North Korea, this is unlikely.

The choice then will be to either adapt or fight (air strikes). The United States did adapt (post-Cuba) to a Soviet ability to nuke the U.S. homeland and, more generally, it has lived with Soviet/Russian and Chinese nuclear deterrence for decades. And South Korea and Japan have adapted to the Northern threat already (although not enough). But the United States seems to be more prone to anxiety—if not hysteria—regarding North Korea. President Trump insisted in early January that he will not permit the North to obtain such a weapon—and the only way to achieve that goal is through a major conflict. This choice is coming soon.

Image: A soldier salutes from atop an armoured vehicle as it drives past the stand with North Korean leader Kim Jong Un during a military parade marking the 105th birth anniversary of country's founding father Kim Il Sung, in Pyongyang April 15, 2017. REUTERS/Damir Sagolj.