Will the American Way of Life Become a Casualty of the Coronavirus? 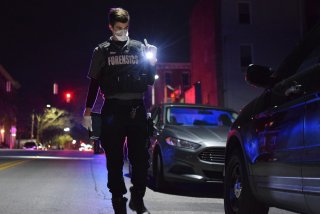 It began as a purge. Personal security was gutted. Prosperity was siphoned away. People went into hiding, beset by the idea that they could die in a coronavirus contagion haze after interacting with the wrong person. But that wasn’t the most difficult part about enduring the pandemic. The true tribulations began two months after the purge; they began after people had become more desperate, more afraid of the future, and more confident about returning to their old ways. In January, they had gathered at their favorite bars after a long day at the office and complained about politics or ate one too many tacos. It was a blind bliss bought by ignorance. In March, they were informed by President Donald Trump that they would be grappling with a worldwide pandemic. By April, the country had changed. A virus that had gained footing overseas had spread like wildfire in major cities, forcing bars and restaurants to shutter their doors. The long days at the office were gone. Economic stability had disappeared. At night, the news organizations displayed images of corpses wrapped in white bags being loaded into refrigerated trucks in the once-busy streets of New York City. They showed video footage of people in biohazard suits placing bodies into a mass grave on Hart Island. The gears in the clock were moving at a fast pace in high-density parts of the country: alive this month and dead the next. By May, those who resided outside of the coronavirus hot zones though, who didn’t have to see the deadly virus’s grim threats on a daily basis, yearned for their old ways of living.

In Baltimore, life was operating on a set of gears that were gummed up with denial and grease. They bore several shades of serialism spanning from the prosperous parts that typically attracted people with plump paychecks to the impoverished portions populated by those with change-agent dreams and those who had survived enough broken dreams to stop believing in change. In the run-down, partially burned-down neighborhoods surrounding the city’s center, most of the stores stayed open because essential businesses barely existed before the coronavirus became an existential threat. In the upscale parts of the city, many of the stores had closed but the restaurants and food markets remained operational. People adapted to the change at their own pace. The majority of them tried to abide by the new rules and restrictions enforced by city leaders and state officials. They wore masks in public spaces. They tried to maintain some semblance of distance, some respect for the threat that the coronavirus posed. The minority clung to pre-pandemic normalcy.

This trend was evident on the public buses that shuttled those on restricted incomes to and from various parts of the city, where the pushback was small but obvious. Some people would slide their masks down to shout into their phones. The bus driver might say something about it but more often than not, they were too busy driving a bus. If they chose, instead, to ride a bicycle, then they wore their masks around their necks like a necklace because it denied them oxygen. 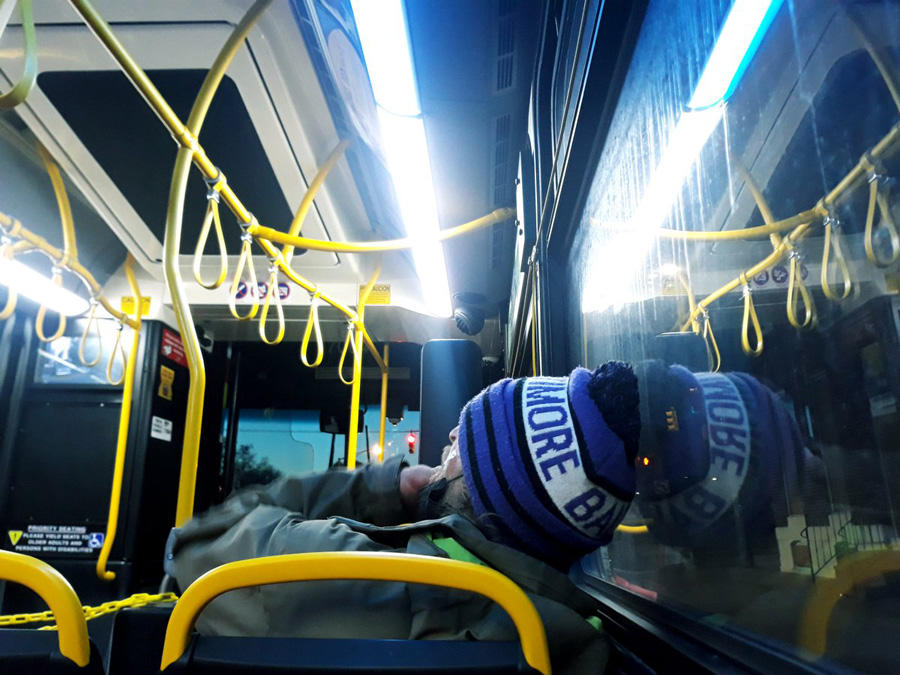 In the popular parts of the impoverished neighborhoods, people still gathered in areas where it was popular to buy and sell drugs. They squished into small corner stores where the “no more than ten people” rule had no impact. They went about the task of trying to muddle through life after a deadly disease had stolen their income and security. Maybe it wasn’t “essential” for the stout man in the N95 mask to set up a barbecue grill by the auto repair shop and sell $1.50 cheeseburgers to passing strangers, but it was probably the only way he was going to make any money during the era of the coronavirus. In the wealthier parts of town—around the upscale downtown buildings and the harbor area—the pushback was more obvious. Joggers who clearly couldn’t breathe through a mask ran up and down the sidewalks without one, forcing those individuals who were more conscientious of the fact that they could be contagious to step to the side. Couples walked their dogs together. And at the end of a day of self-prioritization, they sometimes strolled into one of many area restaurants to buy to-go meals and sample the happy hour specials—something that couldn’t be done in the poor parts of town. It was a tale of two cities, two Baltimores, two realities.

Perhaps, in the end, after the world was ravaged by another of the many atrocities that mankind’s history has been built upon century after century, the greatest danger to the city wouldn’t be a virus that people couldn’t see; perhaps, instead, it would be their apathy.

And as the days went by and people’s resolve to reside in self-quarantine bubbles slowly started to fray, violent crimes began to gain momentum. In May, the eerily calm days and nights shifted towards the familiar sour tones of pre-summer violence. Detectives investigated shooting after shooting searching for clues and solutions amid the hubbub of personal health concerns and pandemic panic. 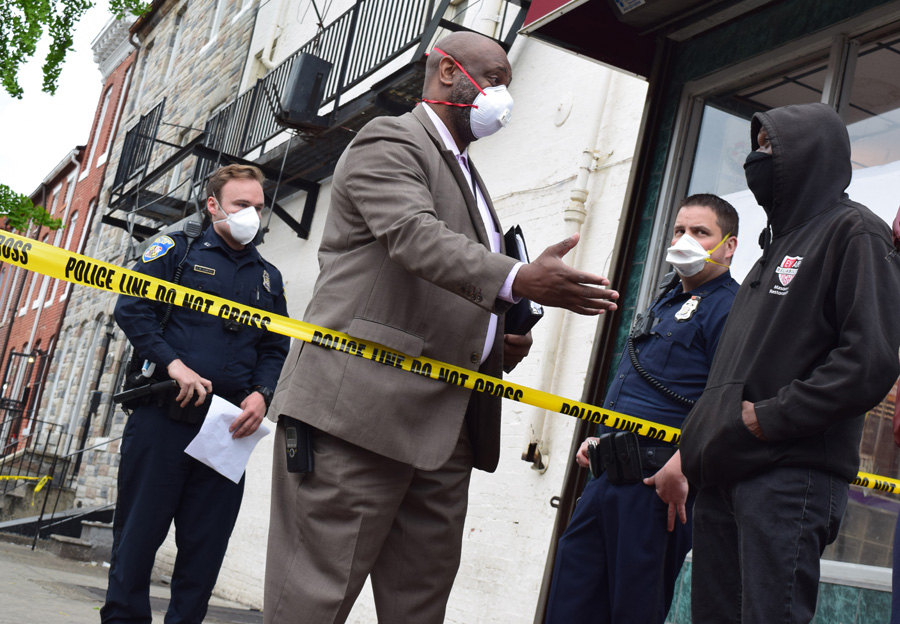 Crime lab technicians, who had gathered evidence in rain and snow, who had watched evidence markers skid across the concrete with a push from the wild wind and worked in freezing weather conditions, were expected to perform under the same conditions with cumbersome masks attached to their faces. They were the worker bees of the colony, buzzing around from crime scene to crime scene at all hours of the day. A shooting here; a commercial burglary there. Recovering shell casings on the east side of the city and then dusting for fingerprints in the west. Without them, the hive would become weak—their small role bore that much significance on its success and security. Over the weekend, they scattered across the city. On Friday night, they collected evidence as an inebriated man bumbled through their outdoor workspace, and then, on Sunday night, they were back in that same neighborhood again, enduring the wrath of a rainstorm. 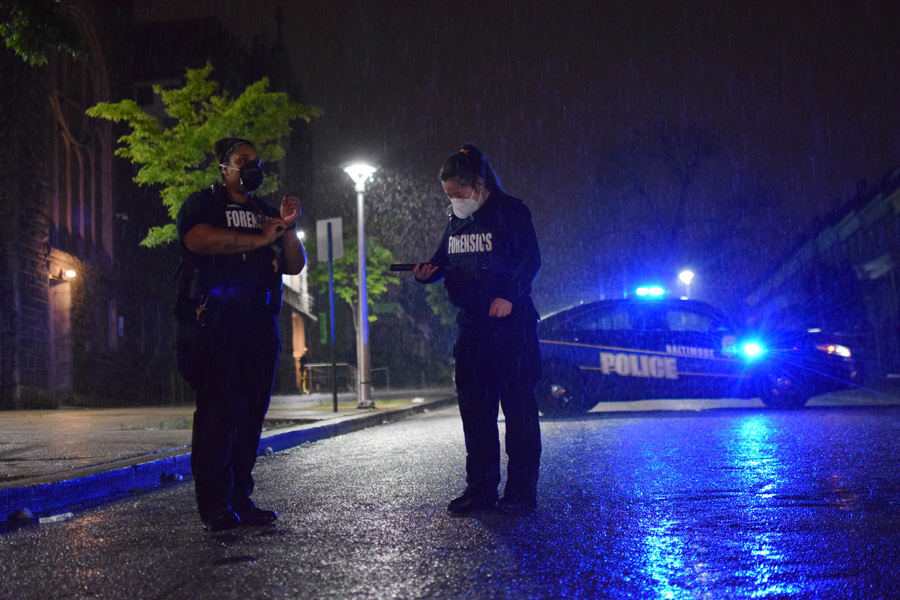 The next day showed little reprieve. There were more shootings on Monday. Detectives and crime lab technicians found themselves exploring familiar spaces again, returning to neighborhoods that had recently been rattled by violence. Police were tracking burglaries, checking on the few businesses still operating, and recovering ATMs from the favorite dumping grounds of the city’s criminals. It seemed as if the gears of Baltimore’s clock were turning at a quicker pace. 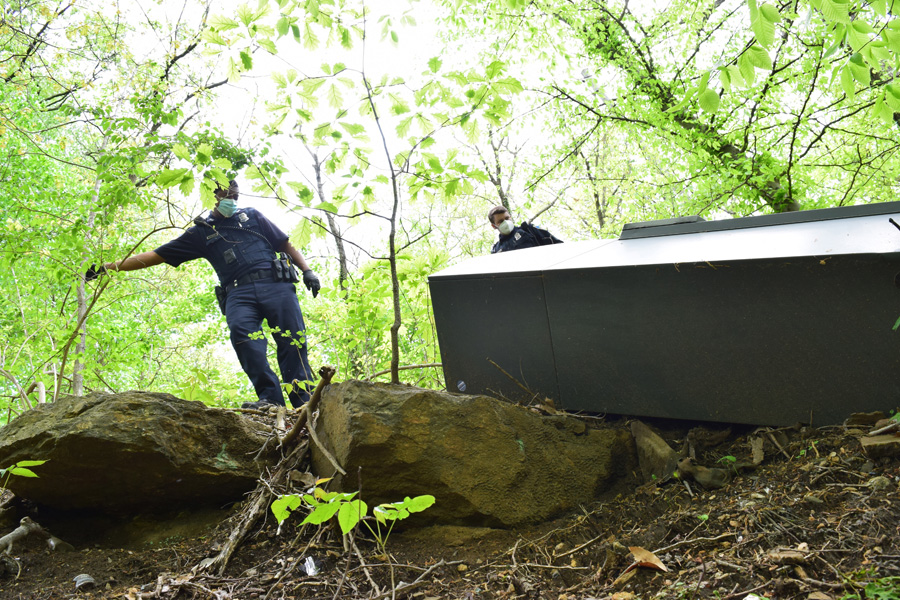 It was still unclear at the beginning of May if life was going to be the same as it was before the coronavirus swept across the planet. No one knew if there would be major risks associated with trying to travel back in time to old comfort zones. It was, after all, difficult for people to see the dangers associated with a pandemic when the negative impacts of it weren’t happening in front of them. It was difficult for them to believe that their lives could be in jeopardy when their dysfunctional society was still somewhat functioning. This frustration and arrogance were on flagrant display at the city’s sole Target store. People were content to wait close together in long lines to buy food, shampoo, and nail polish, their faces partially shielded by a variety of colorful cloth that they could conveniently use to mask their emotions. They were living out every bank robber’s wildest fantasy wrapped up into an apocalyptic dystopia.

Over many centuries, the world has endured epic tragedies that yielded instability, cultural changes, and death. The environment created by the coronavirus wasn’t any different. Various societies suffered and their ways of life went extinct but it didn’t kill mankind so much as it added to his complicated layers of history. Pompeii was a pleasure destination, a place where physical addictions were monetized. But then, one day Mount Vesuvius, the neighborhood volcano, erupted and killed the people in and around the city. It was the end of an era and the creation of an archaeological treasure. An extreme tragedy, therefore, does not necessarily connote the beginning of the end; most of the time, it just marks the end of the beginning. It’s much like Jeff Goldblum noted when he described the dangers of ignoring the history of evolution while playing the role of Dr. Ian Malcolm in Jurassic Park: “Life will not be contained . . . Life finds a way.”