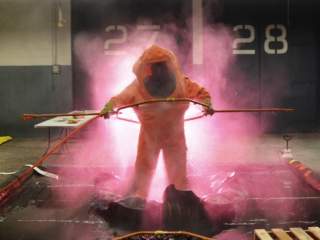 In Northeast Asia, where national security still overwhelmingly dominates the perspectives and behavior of states, nuclear proliferation, both vertical and horizontal, is gaining stronger momentum. China’s recent but substantial investment in modernizing its nuclear arsenal and improving its reprocessing capacity is alarming its neighbors, as well as the United States. The nuclear pursuits of North Korea and, in particular, the acceleration of nuclear and missile tests seem to be spiraling, whereas diplomatic efforts to stop Pyongyang's nuclear path have been futile to date. In addition to its fourth nuclear test in January 2016, a series of missile and rocket tests and the recent firing of a submarine-launched ballistic missile (SLBM), Pyongyang is reportedly preparing another nuclear weapons test in the coming months.

However, China and North Korea are not the only countries in Northeast Asia that are a cause for concern to the international community. Two close U.S. allies with advanced nuclear technology, South Korea and Japan, are also considered potential nuclear powers that might be able to develop a nuclear arsenal within a relatively short time frame, should they decide to do so. Growing concerns about nuclear proliferation in the region have cast doubts about whether these U.S. allies will continuously stay out of the military nuclear race. If South Korean and Japanese leaders came to be placed under more serious internal or external pressure due to growing military tensions, they might be tempted to pursue less restrained policy decisions about nuclear armament.

Under the current circumstances, it is widely assumed the two countries have no incentive to develop their own nuclear weapons as they are protected by U.S. extended nuclear deterrence. North Korea’s nuclear tests, though, have not only threatened them, but also changed geopolitical calculations about nuclear weapons in the region. Located at a distance that North Korea’s short- or medium-range missiles can reach, South Korea and Japan are directly threatened by Pyongyang's military provocations, whereas the mainland United States cannot be targeted with North Korea’s current intercontinental ballistic missile technology. In the near future, U.S. allies might become more suspicious about the United States’ commitment to its allies as the dynamic of alliance politics is changing. For instance, the increasing possibility that Donald Trump, asserting that U.S. allies should take more responsibility for their defense and even develop their own nuclear weapons, may become the Republican presidential candidate, is troubling for these countries. The Japanese government promptly reacted to Trump’s statement saying that “[i]t is impossible that Japan will arm itself with nuclear weapons,” which was an unusual response to a foreign-policy pledge made by a prospective presidential candidate overseas.

Some policy experts argue that South Korea and Japan would not attempt to join the nuclear club regardless of their level of nuclear capability. The decision to go nuclear would certainly bring a major risk of political and economic isolation. Moreover, as previous U.S. administrations have done, Washington would not simply let them develop their own nuclear weapons. Currently, there is no reason to believe that the United States would risk losing its influence in the region and stand by growing military tension and domino effects caused by nuclear newcomers. Needless to say, South Korea and Japan, both state parties to the Nuclear Nonproliferation Treaty (NPT), would not want to join North Korea as the only country having ever withdrawn from the treaty which they have been upholding for almost half a century. Finally, Japan’s own experience with atomic bombs in the Second World War is another aspect to be considered; antinuclear sentiments are deeply rooted in the identity of many Japanese, and the Japanese government might not willingly abandon its position as the only “victim” of a nuclear attack by pursuing nuclear armament.

When it comes to South Korea, it is interesting to note that public opinion about nuclear weapons is clearly divided and sometimes tilts in favor of acquiring an independent nuclear deterrent. According to several polls taken after North Korea’s fourth nuclear test, between 52 and 68 percent of respondents were in favor of developing nuclear armament in the South, notwithstanding a decline in public support from 2013. Furthermore, some politicians from conservative circles do not hide their wish to have those weapons in spite of the South Korean government’s official support for the denuclearization of the Korean Peninsula. For instance, Chung Mong-joon, a seventh-term lawmaker of the ruling Saenuri Party as well as a son of the founder of the Hyundai Group, is one of the prominent political figures who have continuously opined that South Korea should have its own deterrent. Lately, this pronuclear argument has been reinforced by new supporters, including lawmaker Won Yoo-chul, parliamentary floor leader of the Saenuri Party. At the National Assembly in February, Won stated that “[t]he time has come for us to seriously consider effective and substantial measures of self-defense and deterrence against North Korea,” proposing that South Korea develop its own nuclear arsenal, or that U.S. tactical nuclear weapons be brought back to the South. In reality, however, the arguments of these politicians would not be implementable even if they gained more traction, because of the legal and technological restrictions imposed on South Korea. One of these restrictions is the U.S.-ROK Nuclear Cooperation Agreement, which prohibits South Korea from reprocessing spent nuclear fuel, while the South’s long lasting efforts to acquire a right to pyroprocess the fuel have a still long way to go.

As far as Japan is concerned, its nuclear intentions have not been stated clearly, but its capability to reprocess spent nuclear fuel increasingly concerns the international community. Unlike South Korea, Japan has been allowed to enrich uranium and to reprocess spent fuel under the the U.S.-Japan Nuclear Cooperation Agreement, and has been building the Rokkasho reprocessing plant with the support of French state-owned company Areva since the early 1990s. Even though the plant’s opening has been postponed again until 2018 after a series of delays, Japan has accumulated a huge surplus of plutonium stocks. Currently, Japan stockpiles eleven metric tons of plutonium in domestic sites, while another thirty-six metric tons are waiting to be returned to Japan from Britain and France where they have been reprocessed. This is a sufficient amount of plutonium to produce nearly six thousand atomic bombs. On that account, Japan is often regarded as a “latent” nuclear-weapon state. Although 730 pounds of weapons-grade plutonium were transported to the United States in March, this is a tiny portion of Japan’s plutonium stockpiles, and it will not ease international security concerns. The fact that the Japanese cabinet approved a bill to guarantee funding for the reprocessing plant also shows that Tokyo does not intend to reconsider its current policy on the reprocessing of nuclear fuel. As long as Japan continues to pursue reprocessing while maintaining or not significantly reducing its plutonium stockpiles, the United States and Japan will have a hard time justifying their anxieties about China’s plans to develop a reprocessing capability.

Nuclear weapons programs are generally clandestine by nature. However, the global nonproliferation regime put in place by the NPT is now well established, and significantly affects its member states’ decisions. If any “democratic” state party to the NPT wanted to develop nuclear weapons, that country would be subjected to the double pressure: from the international community, and from domestic opinion. In the cases of South Korea and Japan, it would be a triple pressure, including the U.S. government, their closest ally. Thus, if the international community intends to prevent further nuclear proliferation in Northeast Asia, close consideration should be given to how these three pressures against potential proliferators can be used and coordinated.

With the already existing international and bilateral pressure, another key driver discouraging the ROK and Japanese governments from going nuclear will be domestic pressure in the form of either elections or organized public movements.

Korea’s recent legislative elections have interesting implications in this regard. One of the reasons that had led some lawmakers from the ruling conservative party to express their pro-nuclear opinion in public early this year was their confidence in victory in the April 2016 election. As President Park Geun-hye and her ruling party had high approval ratings and were expected to overwhelmingly win the legislative election, they were less prudent than usual on such a controversial issue as nuclear armament. The election, however, turned out to be a humiliating defeat for the ruling Saenuri Party; not only did the party lose the parliamentary majority that they had held for sixteen years, but they secured even fewer seats than the main opposition Minjoo Party. This poor result is likely to restrain the attempts of some right-wing politicians to use the North Korean threat for their pronuclear arguments. Furthermore, opposition parties supportive of denuclearizing the Korean Peninsula are expected to have a stronger voice in security issues when a new parliamentary term starts at the end of May.

In Japan, the likelihood of opposition parties being able to pressure Prime Minister Shinzo Abe’s administration on nuclear policy is more limited because the dominance of Liberal Democratic Party (LDP) in the Diet is not expected to change in the near future. Yet Japanese civil society has nurtured a solid antinuclear culture through its own experiences: the U.S. atomic bombings in Hiroshima and Nagasaki in 1945, and the Fukushima disaster in 2011. The antinuclear movements in Japan started in the 1950s, and since then have mostly focused on opposing nuclear arms. For instance, Hidankyo (the Japan Confederation of A- and H- Bomb Sufferers Organizations) was nominated three times for the Nobel Peace Prize for its invaluable work to prevent a nuclear war and to eliminate nuclear weapons, and Mayors for Peace, initiated by the mayors of Hiroshima and Nagasaki in 1982, has also been actively working to raise international awareness about the necessity for the total abolition of nuclear weapons. However, it was not until when the Fukushima disaster happened that antinuclear sentiments, particularly against nuclear power, became popular among ordinary Japanese citizens. In June 2012, Japan witnessed the largest turnout of demonstrators in Tokyo since the 1960s—two hundred thousand people, according to the maximum estimates—in response to the government’s decision to restart Units 3 and 4 at the Oi nuclear power plant. Even though anti–nuclear power protests seem to have lost their momentum after the pronuclear LDP returned to power at the end of 2012, Japan’s once highly motivated anti–nuclear power movements have the potential to grow into a civil movement against Japan’s development of nuclear weapons, should the time come.