Will Anti-Trump Forces Cross the Rubiocon to Support Cruz? 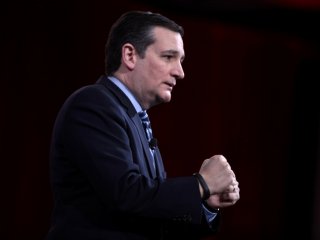 The Republican establishment and the conservative movement have increasingly been putting aside their differences to join forces against Republican frontrunner Donald Trump.

Will that establishment-movement alliance of convenience still hold if the main alternative to Trump is Ted Cruz rather than Marco Rubio?

Super Saturday was certainly much kinder to Cruz than Rubio. The Texas senator won big in Kansas. He won Maine, where Trump was endorsed by the Republican governor. He nearly beat Trump in Louisiana and came much closer than expected to upsetting him in Kentucky.

If Saturday was good for Cruz, it was a disaster for Rubio. The Florida senator didn’t even come close to the 20 percent threshold for winning delegates from Louisiana, taking just 11 percent of the vote. He got barely more than half of Cruz’s share of the vote in Kentucky. Rubio finished fourth in Maine behind John Kasich, winning no delegates from the state.

Cruz has now won seven states to Trump’s twelve and beaten the bombastic billionaire in eight. Rubio has won only the Minnesota caucus. Rubio’s supporters in the party establishment and conservative media keep arguing he is the most electable candidate and generating excitement over his second- and third-place finishes. But it is hard to maintain a reputation for electability with the second-worst winning record of the surviving major candidates.

When Trump wanted to distract attention from his relatively weak performance in his press conference Saturday night, he immediately pointed out that Rubio did much worse. He suggested it might be time for Rubio to consider dropping out of the race, much as Cruz said on Super Tuesday that rivals with a worse track record beating Trump should “prayerfully” contemplate packing it in.

A Trump-Cruz nomination fight would be a nightmare for the establishment, potentially freezing out the party’s governing class at the Republican National Convention. The well-funded effort to attack Trump with advertising in key states that is now underway was delayed for months by donors who were hesitant to intervene in the race if Cruz was going to be the main beneficiary of an anti-Trump onslaught.

Indeed, establishment wallets really began to open up after Rubio supporters were pleased with their candidate’s showing in Iowa and South Carolina. The big guns are hoping to come to Rubio’s rescue in Florida, where he has been trailing Trump badly.

Rubio is also acceptable to most movement conservatives. He enjoyed Tea Party support in his 2010 election to the Senate, when he ran against an establishment Republican who eventually became an independent and then a Democrat. The image of the relatively young Latino senator campaigning in South Carolina with fellow young minority conservatives (Gov. Nikki Haley and Sen. Tim Scott) was to many conservatives a refreshing contrast with the nearly 70-year-old billionaire white male Trump.

Rubio could differentiate his Florida strategy from the one unsuccessfully employed by Rudy Giuliani in 2008 because he has been competing. Giuliani was also replaced by another establishment Republican in John McCain, while Jeb Bush and Chris Christie have dropped out and Kasich has yet to finish better than a distant second in any state.

How long can second, third and even fourth places keep Rubio from falling into Giuliani territory? Every time his candidacy takes a step forward (as in Iowa or South Carolina), it is followed by a step back (New Hampshire, Kansas, Maine).

Maybe Cruz’s Saturday surge was exaggerated by strategic voting against Trump. Cruz was in the best position to beat Trump, so he got the anti-Trump votes (though what little polling existed was inconsistent on this point). The case for this is probably strongest in Louisiana.

If so, we would expect Kasich to do well in Michigan and Rubio is still well positioned to upset Trump in Florida, putting both their campaigns back on track.

But if Cruz emerges as the main anti-Trump candidate, will establishment Republicans back out of the anti-Trump coalition? Publicly, GOP elected officials were starting to say they liked Trump better than Cruz at the beginning of the year. Privately, they were expressing concern that Cruz would do more long-term damage to the party’s brand than Trump.

The controversies involving Trump and race may change that thinking. Trump repeated his disavowal of racist hate groups in his Saturday night press conference. But his previous unforced error on David Duke and the Ku Klux Klan, the fighting between blacks and whites at his raucous rallies, the ubiquity of race-obsessed “alt right” Trump supporters on social media have all combined to create doubt among many Republicans on this front.

Meanwhile, Romney has received plaudits for denouncing Trump while Christie has been widely mocked for endorsing him. Christie had to give a press conference defending his endorsement and promising not to abandon New Jersey’s state business to become a full-time Trump campaign surrogate. That also is likely to influence establishment thinking.

Nevertheless, Cruz’s rise is a real test for Republicans who have long hoped their anti-Trump would be Rubio.