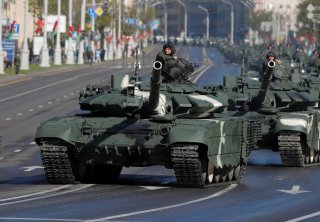 Belarus has imposed a nationwide terrorism alert and deployed a joint task force with Russia as Lukashenko inches closer to being drawn into the Ukraine conflict.

“Our head of state [President Alexander Lukashenko] held a number of meetings with law enforcement agencies, and a counter-terrorist operation regime was introduced,” Belarusian foreign minister Vladimir Makei told Russian newspaper Izvestiya in an interview. “There was information that some neighboring states were planning provocations on, pretty much, the seizure of certain sections of the territory of Belarus,” Makei added.

The measure gives Belarusian authorities sweeping powers to act in the name of public safety, including placing restrictions on the movement of citizens and imposing controls on the flow of information. Belarusian intelligence services later attempted to downplay the announcement. “An anti-terrorist operation has not been carried out on the territory of the Republic of Belarus and is not currently being carried out. The information disseminated on the internet is unreliable,” a Belarusian KGB source told state news outlet Belta. It would be premature to conclude that these clashing statements indicate a brewing conflict between political and security agencies—Lukashenko has so far been successful in consolidating his grip over the Belarusian state apparatus, which overwhelmingly supported him during the anti-government demonstrations of 2020. Instead, the KGB statement may be an attempt to tamp down domestic panic among Belarusians concerned their country is hurtling toward imminent military conflict.

Belarusian newspapers reportedly speculated the counter-terrorism operation announcement may be an act of covert mobilization, with Minsk planning to draft rural Belarusians under the guise of a “combat capability check.” It is unclear how many Belarusians the government could be seeking to draft in this way and how the potential conscripts will be used.

Lukashenko confirmed the terrorism alert on Friday. “It has been introduced due to the aggravation of the situation along the perimeter of our borders,” he told reporters. “It was stipulated a long time ago: we will declare the state of heightened terrorist threat due to aggravation. This is why we started the procedures by deploying the Union State force grouping. I’ve already said that the Belarusian army is at its core and it is supplemented by units of the Russian Federation. Everything is going according to plan.”

Lukashenko has accused Kyiv and NATO countries of plotting to draw Belarus into the Ukraine conflict. “I have already said that Ukraine today is not just discussing but planning strikes on Belarusian territory,” he insisted earlier this week, adding that such plans are “madness” from a military standpoint but that Kyiv is being pressured by its Western “patrons” into “unleashing a war against Belarus in order to drag us into it and to deal with Russia and Belarus simultaneously.” The Belarusian leader previously approved a joint Russian-Belarusian military grouping on Ukrainian territory. Lukashenko, who accused Kyiv of planning “Crimean Bridge 2”—a reference to Ukraine’s alleged involvement in the Crimea bridge blast earlier this month—said he delivered a warning to Ukraine through unofficial channels. “My answer was simple: ‘Tell the president of Ukraine and the other lunatics: if they touch one meter of our territory then the Crimean Bridge will seem to them like a walk in the park’,” he said, according to Reuters. Lukashenko singled out Poland on Friday as the leading source of nuclear tensions in the region. “The initiator who is betting on the use of nuclear weapons … is Poland. [Poland] is provoking you, the United States, to move toward actions involving nuclear weapons. Don’t fall for this trick. You are a large, advanced country, you don’t need to dance to the tune of crazed politicians. If you have nuclear weapons, they should remain in your stockpiles. [The belligerents] need to calm down and come to the negotiating table,” he told NBC News in an interview.

The Belarusian president did not immediately provide evidence of alleged plans by Ukraine, Poland, NATO, or any other Western state to attack his country or otherwise stage a military provocation against Belarus.

Belarusian opposition activists and some experts have warned that Lukashenko’s rhetoric of an imminent strike against Belarus could be intended to lay the groundwork for a Belarusian attack on Ukraine. Others, including the Institute for the Study of War, have argued that Belarus’ 60,000-strong army lacks the capabilities to intervene in Ukraine on the scale needed to meaningfully benefit the Russian war effort. Observers have further assessed that sending soldiers to Ukraine would come at a steep domestic cost for Lukashenko. “The Belarusian army is weak and demotivated, and it is not willing to fight with Ukraine,” Ukrainian military analyst Oleh Zhdanov told the AP, adding that Lukashenko is signaling to the Kremlin that he is willing to aid the Russian war effort by any means short of direct military intervention.

Minsk has faced Western sanctions over its role in providing passage and logistical support to the Russian invasion force that crossed into Ukraine from Belarusian territory in the opening stages of the Russia-Ukraine war.

The G7 warned Belarus in a joint statement on Tuesday “to stop enabling the Russian war of aggression” against Ukraine, but Lukashenko, more isolated from the West than he has ever been over the course of his twenty-eight-year career as Belarusian president, remains defiant in his pro-Moscow stance.

“We support Russia in every possible way. Our support lies in the fact that our Western borders with Poland and Lithuania were not violated, so Russian troops were not stabbed in the back via Belarus. That’s how it has been since the very beginning,” Lukashenko told NBC whilst reaffirming his calls for a negotiated settlement to end the war. “You say that he [Putin] is not winning this war, but neither are you. 50 countries right now are practically fighting a war with Russia on the territory of Ukraine,” he said, referring to Western security assistance to Ukraine. “Therefore, we need to look for ways out of this situation.”