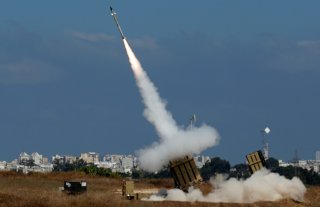 President Joe Biden’s upcoming trip to the Middle East may be the most consequential of his tenure. The Abraham Accords, the historic agreement between Israel and several Arab countries, have generated a preliminary security infrastructure to counter the destabilizing activities of the Islamist regime in Iran.

The accords made it easier for Israel and Arab countries to coordinate militarily, notably to create a regional air defense alliance, the “Middle East Air Defense Alliance” (MEAD), to counter threats from Iran’s ballistic missiles and drones and the threats from its regional proxies such as Hezbollah, the Houthis, and the pro-Iranian Popular Mobilization Forces (PMF) in Iraq.

In a sign of private nervousness, Farsi media linked to the Islamic Revolutionary Guards portrayed the MEAD as an “exaggeration,” “nothing new,” and “something that is not going to work.” However, according to Israeli officials, the program is already operative and has intercepted multiple Iranian attacks against Israel and other countries, including in one instance where it shot down an Iranian drone fired from Iraq toward Israel.

Saudi Arabia is not officially part of MEAD, but the kingdom has been vulnerable to attacks by the Yemeni Houthis, which used Iranian-supplied ballistic missiles and drones to sabotage its oil facilities. For instance, in September 2019, the Houthis claimed credit for an attack on the Abqaiq-Khurais oil facilities which knocked out about 5.7 million barrels per day of the kingdom’s oil production, more than half of Saudi refining capacity (5 percent of global production), and caused chaos in the financial markets. Saudi officials asked Israel to buy its revolutionary laser-powered air defense system, known as Iron Beam, a sale that depends on the White House approval.

Moreover, despite intimidation by Iran, Jordan has shown interest in joining the alliance. King Abdullah II affirmed that he would support the formation of a Middle East military alliance similar to the North Atlantic Treaty Organization (NATO) with like-minded countries. “I’d like to see more countries in the area come into that mix. I would be one of the first people that would endorse a Middle East NATO.”

Turkey, whose relations with Israel were strained for over a decade, has changed course. Ankara has recently explored cooperation with Jerusalem in the gas and energy field and indicated that full diplomatic relations might be restored. Turkey’s shift reflects a broader strategy to incorporate into the region by restoring ties with Egypt and Saudi Arabia, which soured over the issue of the Muslim Brotherhood and the killing of Jamal Khashoggi, respectively. Efforts to cut reliance on Russian gas provided another impetus. Turkey has tried to secure deliveries of Kurdish gas, prompting Iran to interfere by having the PMF attack the Khor Mor field in Sulaymaniyah managed by Pearl Petroleum, a Kurdish Dana Gas Company subsidiary. The assessment in Ankara is that Israel would be a valuable conduit for its plan to integrate into the Middle East.

Israel’s leading role in the evolving “regional NATO” has been complemented by its rising profile as a key non-member partner of NATO. The Russian invasion of Ukraine has dramatically altered NATO’s priorities, as its recent Strategic Concept (SC) indicates. Israel has been especially apricated for its innovations in cyberwarfare, intelligence, and military-civilian interface—core goals of the SC. Equally important, NATO has welcomed MEAD and is encouraged by Turkey’s warming ties with Israel.

A “Middle East NATO” would not come a minute too soon. The invasion of Ukraine cemented a strategic-economic alliance between China, Russia, and Iran. The three countries have already signed long-term economic agreements and conducted several joint military exercises in Persian Gulf waters to challenge the U.S. presence in the region. As part of the twenty-five-year China-Iran agreement, China is said to have acquired rights to the strategic island of Kish and built a naval facility in Bandar Jask, not too far from the American base in Diego Garcia in the Indian Ocean.

Security aside, Iran has made substantial strides toward integrating into the Chinese-Russian-led economic infrastructure created to rival the West. In 2021, Iran was accepted as a full member of the Shanghai Cooperation Organization (SCO), the world’s largest regional organization, which covers 60 percent of Eurasia and 40 percent of its population. Iran has also used the Chinese-run Cross-Border Interbank Payment System (CIPS), a yuan-based alternative to SWIFT, the dollar-denominated banking messaging system.

Iran’s push to become a breakout nuclear power is also of major concern. Both Russia and China are not likely to endorse broader sanctions on Iran should the negotiations to restore the Joint Comprehensive Plan of Action (JCPOA) fail. On the contrary, China has helped Iran evade sanctions by buying its oil. Paradoxically, if the JCPOA is reinstated, billions of dollars in sanctions relief would help Iran fund terrorism and destabilize the region even more. Hezbollah’s growing Iranian-made drone arsenal, estimated at some 2,000, is a case in point. Iran directed the terror group to target Israeli gas-drilling platforms in the Mediterranean. The Houthis and the PMF have used drones and are predicted to increase their missile and drone activity.

The United States has vital interests in the Middle East. A void created because of the U.S. pivot to Europe and Asia needs to be filled by a new regional alliance. Washington officials understand this well and have worked hard to push for normalization between Saudi Arabia and Israel. It has been reported that the Americans have sponsored a meeting of senior defense officials from Israel and Saudi Arabia in Egypt. It is expected that during his visit, Biden will discuss the “vision for integrated missile defense and naval defense.” A formal Middle East NATO” should not be too far behind.