Will the Black Lives Revolution Change the Country or Just a Street Name? 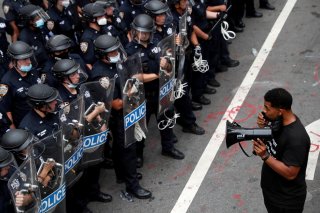 We live in revolutionary times. Throughout North America and Western Europe, social movements demanding rapid, fundamental, and comprehensive change have taken to the streets. Like all revolutionaries, they also claim to know how to bring about such progressive revolutionary change—by targeting the one factor that serves as the source of the system’s injustice. As I argue below, why these movements emerged and whether or not they will prove to be successful can also be explained in terms of a revolutionary paradigm.

All revolutionaries have always been characterized by three central features.

First, they want existing socio-economic-political systems to be changed quickly, comprehensively, and fundamentally. In this respect, they differ from mere radicals, who want only rapid change of one or more systemic features. And they obviously differ from moderates and liberals who aspire to slow and steady change and conservatives who countenance little to no change. Ironically, revolutionaries are not unlike reactionaries (or counter-revolutionaries), who also desire rapid, comprehensive, and fundamental change, but “backward,” and not “forward.” Unsurprisingly, revolutionaries view the past and its representations (texts, monuments, buildings) as something to be destroyed or ignored. History begins with the revolutionaries.

Revolutionary movements also insist that they promote human progress. They claim to “liberate” all of humanity—and not just some part thereof—and they insist they are on the side of history and its “inevitable” trajectory toward “freedom.” Here, too, revolutionaries are not unlike reactionaries, who make very similar universality claims of inevitability, though again, going backward, as opposed to forward. And all of them are clearly children of the Enlightenment, even when they decry it.

A few examples will clarify these points. The Jacobins in France, the Bolsheviks in Russia, the Maoists in China, the Nazis in Germany, the student revolutionaries in the United States and Europe in the 1960s, the Red Brigades in Italy, the Baader-Meinhof group in Germany, and today’s Me Too and Black Lives Matter activists wanted, or want, to change all social, political, economic, and cultural relations within their respective countries from top to bottom and more or less immediately. Nothing less than a complete overhaul will do.

All these movements or parties claimed, or claim, to be liberating all of humanity. Removing the exploitative bourgeoisie will liberate everyone—as will destroying capitalism, liquidating the Jews, or abolishing sexism or racism. More importantly, all these movements or parties claimed that there was only one source of all evil and, thus, that abolishing it would immediately fix all problems and introduce utopia. Most French revolutionaries focused their attention on inequality; some, like Robespierre and Saint-Just, on virtue. Communists claimed that the key factor was class; abolish class and all will be well. Nazis identified the problem as race; get rid of the Jews and acknowledge Aryan superiority and the world would function properly. The youthful revolutionaries of the 1960s castigated capitalism. Me Too activists see the problem in sexism, and Black Lives Matter revolutionaries see it in racism. Abolish them and all will be well with America.

Why did the ongoing revolutionary movements emerge?

Some theories of revolution argue that structural contradictions within society will produce irreconcilable tensions that will lead to systemic disruptions if and when sparks or triggers occur and the whole edifice comes crashing down. Seen in this light, contemporary American revolutionaries are the products of systemic inequality and widespread sexism and/or racism, while the Harvey Weinstein affair and the killing of George Floyd would serve as the spark.

Other theories focus on the success that revolutionary activists and leaders have in promoting their ideology, mobilizing recruits, and attracting popular support. Seen in this light, the success of Me Too and Black Lives Matter is a direct product of their ability to extend their appeal by crafting an ideological message that extends beyond narrow constituencies and appeals to broader swathes of the population in general, and youth in particular.

Finally, still other, so-called “moral economy,” theories of revolution focus on the feelings of injustice or relative deprivation motivating people. Women and African-Americans perceive that they are being treated unfairly and, thus, are inclined to revolutionary mobilization. Or they feel relatively deprived because their aspirations are not fulfilled.

Significantly, all three theoretical approaches apply to contemporary America and its Me Too and Black Lives Matter revolutionaries. Social scientists call that a condition of “over-determination,” which is when every possible theory seems to work in explaining a phenomenon. Clearly, neither Me Too nor Black Lives Matter was serendipitous. Indeed, I am tempted to say that their revolutionary activism was almost inevitable.

But will these movements succeed in bringing about the change they desire?

The historical record is not encouraging. Revolutionaries who succeed in assuming power are very adept at destroying existing systemic relations, but they have a miserable record when it comes to introducing the utopias they claim to desire. Revolutionary France suffered extreme violence for several years and then almost fully reverted to the social relations and monarchical traditions that the revolutionaries had supposedly destroyed. The Bolsheviks destroyed the tsarist system and replaced it with Stalinism, which proved to be infinitely more repressive. The Maoists abolished imperial and republican China and replaced it with a system of mass repression that produced millions of deaths and almost destroyed China. The Nazis destroyed Weimar, but, needless to say, failed at building a thousand-year Reich.

The revolutionaries who have not come to power have no less dismal a record. Baader-Meinhof wanted to weaken the German state but succeeded only in strengthening it. Ditto for the Red Brigades. America’s youthful revolutionaries of the 1960s did change fashion, sex, and music, but little else. If history is any guide to the future, then similarly dismal fates may be in store for Me Too and Black Lives Matter.

Why do revolutionaries, both those in power and aspiring to power, fail?

At that point, revolutionaries face a painful choice: either give in to moderate demands and effectively abandon the revolution or overcome resistance. Revolutionaries in power can choose the latter course because they control the means of coercion. Of course, in applying coercion they just alienate their critics even more. Revolutionaries aspiring to power don’t have the coercive option. They may engage in individual acts of terrorism, which only alienate moderates and conservatives, or they can, as they usually do, split into radical and moderate factions, engage in internecine warfare, and increasingly become irrelevant.

The second reason for ineffectiveness applies only to revolutionaries out of power. Unlike revolutionaries who have power, they cannot reward their members with sinecures; nor can they continually maintain a high level of popular mobilization. Since their activity—marches, demonstrations, and so on—is all that they can do, sooner or later fatigue, indifference, and disillusionment set in among their followers. How often can one march—especially if a term paper is due? How much can one care, if it seems evident that no revolutionary change is in the cards? How fiery can passions remain if the movement is splitting and engaging in internal squabbling?

The good news for Me Too and Black Lives Matter is that they have successfully “raised consciousness” and thereby affected what may turn out to be a long-lasting cultural change. The bad news is that, if they remain revolutionary, then they will probably fail to transform American society. And if they abandon revolution, they will simply become nice liberals, of which America has plenty.

Alexander J. Motyl is a professor of Political Science at Rutgers University in Newark, New Jersey.