Will Boris Johnson Take a Tougher Stance on Iran? 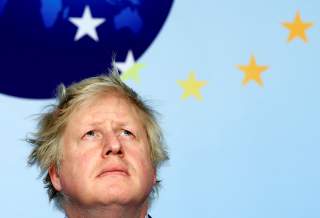 British Foreign Secretary Jeremy Hunt announced a series of measures aimed at countering Iran in the Persian Gulf during a Monday afternoon speech to Parliament. Hunt refused to offer any concessions for the release of the Stena Impero, a British tanker captured by Iranian forces on Friday, and stopped short of retaliating against Iran. In his last major action before Conservative Party leadership elections, Hunt attempted to prove his leadership abilities while avoiding a conflict his country cannot afford to fight—a gambit that failed the next day when he was passed up in favor of his hawkish predecessor, Boris Johnson, who is now slated to become prime minister.

Hunt announced that Britain would be dispatching HMS Duncan, a Type 45 destroyer, while “seek[ing] to put together a European-led maritime protection mission” in the Persian Gulf. Additionally, his government has been advising British-owned ships to wait for instructions, “which may involve travelling in convoy,” before entering the Strait of Hormuz.

The Foreign Secretary was one of two candidates to replace outgoing Prime Minister Theresa May as leader of the Conservative Party, a political race that occurred amid Britain’s effort to complete “Brexit” and leave the European Union before the October 21 deadline. Johnson defeated Hunt in an internal party election on Tuesday, but the EU immediately shot down Johnson’s Brexit proposal, leaving Britain’s foreign policy in a puff of uncertainty.

Fabian Hamilton, a member of Parliament from the opposition Labour Party, took the opportunity to question Hunt on behalf of Shadow Foreign Secretary Emily Thornberry, who is currently in the hospital after a biking accident. The member of Parliament for Leeds North East hammered the Conservative candidate seemingly for being both too weak on Iran and too aggressive towards the Middle Eastern republic.

“Can [Hunt] tell us what the government is doing to persuade the Trump administration to drop its sanctions against Iran . . . before the escalation of tension reaches the point of no return?” he asked. “Why on earth a full seventeen days later was a British tanker left so hopelessly unprotected in the Strait of Hormuz when anyone with any understanding of this issue could see that this was exactly how the Iranians would respond to the seizure of their own?”

Iranian forces captured the British-flagged Stena Impero in a televised operation, embarrassing the British government, a little over two weeks after British forces in Gibraltar seized the Grace 1, a tanker allegedly carrying Iranian oil to Syria in violation of European Union sanctions. Iran claims that it detained the British tanker for “breaching international maritime law,” but the operation seems to make good on earlier threats to respond to the detention of the Grace 1 in kind.

Hunt rejected the connection between the Grace 1 and the Stena Impero. “There is simply no comparison between Iran’s illegal seizure of a vessel inside a recognized shipping lane where the Stena Impero had every right to be and the enforcement of EU sanctions against a tanker that had freely navigated into the waters of a British overseas territory,” he said.

While questioning Hunt, Hamilton claimed that authorities in Gibraltar chose to arrest the Grace 1 on a tip from Washington, citing a report in the Spanish newspaper El País. British media had speculated that hawkish U.S. National Security Advisor John Bolton had goaded Britain into disrupting Iranian shipping as part of his “maximum pressure” campaign. Trita Parsi, executive vice president of the Quincy Institute, made the same claim in a statement to the National Interest.

Since leaving the Joint Comprehensive Plan of Action, a deal for Iran to submit to international nuclear nonproliferation inspections in exchange for access to international markets, the Trump administration has made it its goal to reduce Iranian oil exports to zero.

“I want to be absolutely clear that the United Kingdom did not endorse that detention by the Gibraltarian authorities because of a request by the U.S.” Hunt responded to Hamilton’s allegation.

Defense Priorities senior fellow and retired Lt. Col. Daniel Davis is skeptical of Hunt’s denial. “I would be shocked if it was the Brits' own decision,” the Iraq and Afghanistan veteran told the National Interest. “It was completely out of character for Britain . . . Why they would suddenly, on their own, decide to capture that ship then when they did is pretty suspicious, I'll say.”

However, the British “would support the release of that tanker if we would receive guarantees that that oil was not going to Syria. We made that offer in public as well as in private, so they would know we were absolutely serious about it,” according to Hunt.

When it came to criticism of the military’s failure to defend the Stena Impero, Hunt seemed to falter. “It is, of course, not possible for the Royal Navy to provide escorts for every single ship, or indeed eliminate all risks of piracy, but those risks can be substantially reduced if commercial shipping companies cooperate fully with instructions,” Hunt said, citing the “seventeen transits” of the Strait of Hormuz that the HMS Montrose has done in “recent days.”

Later on, the foreign secretary added that “those close behind-the-scenes discussions with the United States as to how we can improve maritime security had been happening throughout this period . . . They actually asked us to contribute to the maritime force on the twenty-fourth of June, which became a formal request on the thirtieth of June.”

When asked for comment, Commander Rebecca Rebarich, Pentagon spokeswoman for the Middle East and Central Asia, simply told the National Interest that “[t]he U.S. has spoken with a number of partners and allies about Operation Sentinel.”

In a statement explaining Operation Sentinel, the Pentagon said that “[t]his maritime security framework will enable nations to provide escort to their flagged vessels while taking advantage of the cooperation of participating nations for coordination and enhanced maritime domain awareness and surveillance.”

“If Iran continues on this dangerous path, they must accept the price will be a larger Western military presence in the waters along their coastline, not because we wish to increase tensions, but simply because freedom of navigation is a principle which Britain and its allies will always defend,” Hunt told the assembly. “Iran had no right to obstruct the ship's passage, let alone board her. It was therefore an act of state piracy that the House will have no hesitation in condemning. Even more worryingly, this incident was a flagrant breach of the principle of free navigation, on which the global trading system and the world economy ultimately depends.”

Although energy prices increased slightly in response to the tensions in the Strait of Hormuz, which carry a fifth of the world’s oil supplies, the current level of tension is unlikely to cause major disruptions to Britain’s energy supply, said Mark Latham, managing partner at the London-based analysis firm Commodities Intelligence. He told the National Interest that shale oil production in the United States is enough to keep world markets afloat.

“But if I was the Chinese, I would be bricking myself,” he added. China has continued to import Iranian fuels via a network of smugglers and legal loopholes, and the U.S. Department of State announced massive sanctions against the Chinese state energy company Zhuhai Zhenrong Company Limited for continuing to buy Iranian oil in a Tuesday press release.

“The market knows they’re playing chicken now,” Latham added, but “there is a cliff here, and if we go over the cliff, all bets are off.”

The ladder of escalation is now out of Hunt’s hands. Johnson has a much closer relationship to President Donald Trump than the outgoing May government, and reportedly spoke to him in a secret phone call on Thursday.

“So far [the escalation] has been measured and calculated to be something close to the same thing. But if we keep maximum pressure and don't give anything, these things are going to continue to happen,” Davis said. “One of these days, mark my words, one of these incidents is going to spiral out of control. Somebody is going to respond stronger than the other side thinks they should, and then there will be a counter-response, and all of a sudden, you'll find yourself in a war, and there's no going back.”