Will Brexit Be a Barrier for Retooling the Economy? 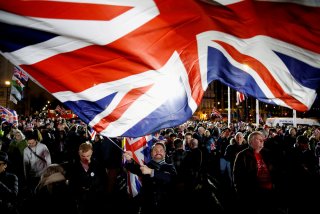 The ghost haunting the British economy is low productivity. A study covering 2007–2016 shows a productivity growth per year of 0.1 percent, below Germany, France and Spain and at par with Italy. In 2015, just before Brexit came on stage, productivity in France was 27 percent and in Germany 35 percent higher than in Britain. Since then, until 2019 it has risen in the eurozone with 2.4 percent, Germany 3.1, France 3.4, Spain 1.5 and Britain on a par with Italy at 0.5 percent.

Inexplicably, no one has bothered to discuss whether Brexit will enhance productivity constituting the most serious barrier for retooling the economy.

Education is vital, but feedback from universities paint Brexit as more harmful than helpful. The Erasmus Programme, orchestrating student exchange among EU member states, has scored high marks from teachers and students. Britain has left the program, which was regarded as a boon for students and a boost for British universities.

The Galileo satellite navigation program unmask how costly it is to launch programs on the edge of high-tech. After Brexit, Britain will not participate in its operation and development. The plan to build a more or less similar national system was abandoned because of costs. An alternative is being considered, but it will be neither easy nor cheap. These kinds of programs may in the long run engineer spin-offs that benefit the economy as a whole. Inside of the EU, the cost-benefit through cost-sharing may have been profitable for Britain. Outside of the EU, the cost-benefit turns against Britain.

Lower regulatory framework is mentioned as an arrow in the quiver to stimulate the economy, albeit it is questionable to say the least, why Britain should be able to throw off various regulations after having left the EU. Much of the red tape is not a result of EU membership, but due to domestic pressure. The support for the protection of the environment, climate change, and safety and health are strong. The unions—23.5 percent of workers equal to 3.7 million are still members—would certainly resist any deterioration of working conditions.

The Christmas Eve agreement contains a clause about the level playing field. It can be taken for granted that the EU will move fast in case Britain tries to work around that commitment. Prime Minister Boris Johnson’s request to business leaders on Jan. 7, barely two weeks after the agreement was struck, to help rip up regulations will lead to raised eyebrows and is more likely than not to trigger off a confrontation with the EU. It is the kind of political signals that gives rise to suspicion about duplicity. With such a policy in mind leaving without an agreement might have been preferable.

The idea of deregulation as an instrument to turn Britain into “Singapore-on-Thames” is alluring in the eyes of some Brexiteers, but the result is much more likely to be “Bangladesh-on-Thames.” Cutting labor costs is the competitive parameter chosen, not higher productivity. Most economists would be immensely reluctant to recommend such a course—for political, social and economic reasons.

Nor does freedom to enter into free trade agreements (FTAs) with non-EU countries, hold much promise. No clarification is at hand to impart why productivity should go up because of FTAs, why Britain outside the EU should be able to trade more with third countries than inside and why FTAs which focus on goods while Britain’s competitive edge is found in services will boost the economy.

So far, FTAs have been concluded with seventy countries, but sixty of those means that trade will continue with the country in question on exactly the same terms as the EU agreements entered into when Britain was a member—a kind of rollover.

The hard nut to crack is that not only must productivity growth be achieved, but it must be higher than for competitors already in the lead.

A big financial commitment is required. Where is the money though? The national debt is at its highest level since the early 1960s. The corporate sector looks close to a rerun of the high indebtedness in the slipstream of the Global Financial Crisis. Investment from outside is becoming less attractive without access to the Single Market.

The EU agreed last year on a stimulus of €1.8 trillion to rebuild a post-coronavirus Europe. The ambition is a greener, more digital and more resilient Europe. Somewhat heretically, maybe Britain should have stayed inside the EU, agreed to this program and used it to modernize the economy. Isn’t it exactly what the British government would love to do? Also, the EU has not run into obstacles when looking for finance.