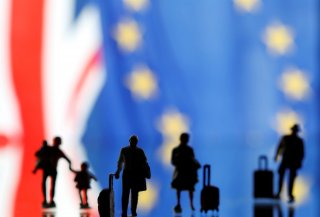 The United Kingdom left the European Union on January 31, 2020. Trade barriers have not gone up immediately, because a transition period is in place until December 31, 2020. The EU and the UK negotiators are working on an agreement to govern trade and other aspects of relationships across the English Channel. It is not clear whether or not a new deal will be in place by the end of the year.

Whether or not a post-membership deal is in place, however, Britain is no longer at the EU’s decisionmaking table. The EU no longer has a British commissioner, and the UK has lost its seats in the European Parliament.

How will the absence of Britain affect EU strategies and outcomes in the years ahead? The answer in the short and medium-term may be obscured by the coronavirus pandemic, but it is nonetheless important to the United States.

Britain took positions in EU councils that were in its own interests. It was never a Trojan horse for the United States, but over the decades, Britain and the United States often were in general agreement on economic, political, and security strategies, such as liberal, pro-competition economic policies and North Atlantic Treaty Organization-centric security strategies. Washington relied on London to make arguments to its European partners in favor of such strategies behind closed doors, and to explain to Americans what the EU was doing and why.

This is an assessment of how Britain’s departure from the EU may change the EU, and what such changes in Europe may mean for the United States. It looks at the impact of the departure in three dimensions: (1) on EU policy preferences, (2) on doing business in Brussels, and (3) on the balance of power after Brexit among the remaining twenty-seven member states. The appraisal is based in part on in-depth interviews held under the Chatham House Rule with former senior European officials, each of whom has had years of experience within EU institutions, and on published analyses. It is necessarily speculative, and for now, cannot examine the likely economic consequences of any post-membership agreement that the UK and the EU may reach later this year. The economics of the various models for post-membership UK-EU relations were set out in previous RAND Corporation studies.

A good starting point for assessing what the British departure will mean for the EU is to consider what hasn’t happened. For example, it was initially feared (or awaited eagerly, depending on the point of view) that Brexit would lead other EU member states to re-evaluate their commitment to the EU. But in national and European Parliament elections in the aftermath of the 2016 referendum, voters in the Netherlands, Austria, and France reduced support for euro-skeptic parties, though anti-immigration sentiment remained strong. Although a number of Italian politicians fulminated about the EU’s lack of economic support for Italy before and during the coronavirus crisis, most parties rejected Mario Salvini’s anti-EU screeds and pushed him out of government. In any case, an Italexit is unlikely, especially given how dependent Italy is on European financial support.

Conversely, some European commentators predicted that an EU without the UK might plunge ahead with deeper political integration. This was the focus of French president Emmanuel Macron’s September 2017 Sorbonne speech but didn’t win broader support among other EU member states. Since the beginning of the coronavirus crisis, there have been calls for “more Europe” but mainly in health affairs (which is now a mainly national competence). For now, there is little evidence of political deepening even without any UK opposition to it. Member states in the east, especially Poland and Hungary, actively oppose any hints of federalization and stymie efforts to develop common policies to deal with migration or judicial oversight. One major exception is the debate over EU aid to ameliorate coronavirus-related economic effects, and whether to fund it with limited borrowing at the EU level, discussed further below. But overall, despite the UK’s departure, there is no momentum for more federalism in today’s Europe.

Britain’s departure will change things in Brussels over time. Since David Cameron’s first government in 2010, the UK steadily has been less prominent than it once was in EU policymaking. The UK withdrew even further from the policy process following the Brexit referendum outcome in June 2016.

For most of its more than four decades as an active EU member, the UK was a prominent advocate for liberal, pro-competitive policies for the EU. The UK advocated strongly for creating the Single Market, as famously recommended in the white paper prepared by a group led by Lord Arthur Cockfield. Britain also pressed hard for liberalization of the European energy market, linked its electricity and gas markets across the Channel, and welcomed European investment in its energy industries. Britain favored strong competition policies and opposed protectionist approaches, such as making extensive use of EU anti-dumping and countervailing duty instruments.

Brussels veterans suggest that the impact of Britain’s departure may not be dramatic for two reasons. First, while a liberal (free market) economic approach is the Commission’s underlying preference (and the source of its institutional power), the broader global environment is less encouraging and the EU, even with the UK as a member, had been moving away from it. Second, today’s issues—including a European focus on constraining tax competition, especially in the digital realm—do not lend themselves to the traditional liberal or dirigiste ideological spectrum. Almost as much as France, Britain has been concerned about tax evasion by large multinationals—especially by Facebook, Apple, Amazon, and similar large U.S.-based digital firms.

Nevertheless, the coronavirus health crisis and the general trend against globalization are having an effect on policy approaches in Brussels and in member states. In May 2020, a group of nine retired senior European Commission (EC) trade policy officials sent Commission President Ursula von der Leyen a letter urging the Commission to increase the effectiveness of its trade defense instruments (antidumping and countervailing duty procedures) in order to combat Chinese and U.S. subsidies and other distortions. The German government took a 20-percent equity stake in Lufthansa in exchange for aid and is putting in place a new industrial policy with a state capitalism gloss. In France and Poland, ministers are calling for “food patriotism,” preferring to buy local even at the expense of other EU member states.

Prior to the coronavirus crisis, it appeared that the loss of the UK’s net budgetary contributions would seriously affect the funding of the seven-year multiannual financial framework (under negotiation as of mid-2020) that the EU would have available for common projects (such as trans-European networks) and cohesion transfers to poorer member states in the Union’s south and east. In response to the sharp economic collapse associated with the response to the coronavirus disease, however, EU finance ministers decided to fund the economic recovery in the short term with a €750 billion recovery fundraised by borrowing for the first time collectively as the EU. Hard-hit countries will get access to €390 billion of the fund on a grant basis. Over the longer term, the EU member states agreed in the seven-year budget perspective to break through the budgetary threshold of 1 percent of EU gross domestic product to fund economic recovery. These are two major steps toward financial solidarity at the EU level, but it took a marathon five-day EU summit to get it done in the context of the coronavirus emergency. It may be years before another such example of fiscal federalism is attempted.

If it had been a member, would Britain have blocked this spending, or gone along? It is hard to know but in London Chancellor of the Exchequer Rishi Sunak’s summer statement including a £30 billion coronavirus-related job support package and sharply increasing borrowing totals. The coronavirus seems to have affected the calculations of even the most prudent governments.

One area where Britain as a member affected EU policymaking, and where its departure will be noticed, is the social policy agenda. For many years the UK was effective in opposing social policy initiatives proposed by the Commission or other member states. Britain negotiated a limited opt-out to the Working Time Directive and helped block more-ambitious social policy initiatives. This is one reason why the EU27 (the EU minus the UK) negotiating position in talks about a follow-on agreement with the UK is so determined in seeking commitments for a “level playing field.” EU member states fear that competition from UK firms with laxer social policy will affect member states since UK producers would have lower costs of production.

In other areas, such as development or climate policy, the UK was solidly in the middle of the EU consensus and its departure from the council table is not likely to affect outcomes. On climate policy, however, the UK is overfulfilling Paris Climate Agreement targets, so the UK’s withdrawal will affect whether the EU will be on course to meet its collective target.

Britain’s absence will certainly be felt in relation to the EU’s foreign and security policy. How the EU adapts—and the broader significance for the wider global community—will depend on member state responses, especially those of large states such as France and, to a lesser extent, Germany. The UK is one of the EU’s two most internationally-minded member states (France is the other) with a traditionally global outlook. It has a UN Security Council seat. Therefore, the UK’s involvement gave heft and substance to the EU’s efforts to devise (on an intergovernmental basis) a coherent and active foreign policy backed up by security policy instruments.