Will Cancel Culture Target Not Only Aristotle, But Also the Bible? 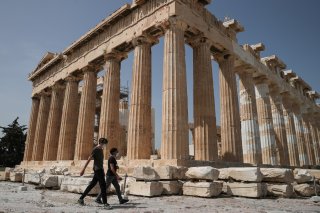 Should Aristotle be booted out of the Western canon for ideological heresy? In a recent essay in the New York Times, the scholar Agnes Callard entered the lists to defend Aristotle from cancel culture. Apparently fearful that Aristotle might incur the displeasure of the proponents of cancel culture, she explained that several of his anti-liberal stances should not repel readers but prompt them to examine his grounds for them more closely. She makes many good points and it would be self-evidently absurd to banish Aristotle, one of history’s greatest thinkers.

But she may also go too far to get him off the hook for some of his more retrograde views. Callard notes that she would not take offense at an alien from a planet where gender doesn’t exist who expressed the view that women on earth are inferior to men. She explains, “I read Aristotle as such an ‘alien.’ His approach to ethics was empirical—that is, it was based on observation—and when he looked around him he saw a world of slavery and of the subjugation of women and manual laborers, a situation he then inscribed into his ethical theory.”

Not so fast. The fact is that there were others in ancient Greece who explicitly dissented from the view that slavery was nothing more than a natural state of affairs. Aristotle’s discussion of slavery in Politics is aimed at them. Had it not been for these (unnamed) thinkers, Aristotle would not have bothered to defend slavery on the basis that some people—chiefly, “barbarians”—are by nature suited for slavery. Nicomachean Ethics does not even mention slavery, so Callard, I think, would have been better off writing “political” as opposed to “ethical theory.”

So much for Aristotle. If you were really out to “cancel” classical writings, the Bible would probably be a better place to start. Consider the rules on slavery in the so-called Covenant Code in Exodus 21. It begins auspiciously: “If you buy a Hebrew servant, he is to serve you for six years. But in the seventh year, he shall go free, without paying anything. If he comes alone, he is to go free alone; but if he has a wife when he comes, she is to go with him.” For time and place, wonderfully liberal. But look at what comes next: “If his master gives him a wife and she bears him sons or daughters, the woman and her children shall belong to her master, and only the man shall go free. But if the servant declares, ‘I love my master and my wife and children and do not want to go free,’ then his master must take him before the judges. He shall take him to the door or the doorpost and pierce his ear with an awl. Then he will be his servant for life.” This choice is in fact none at all. It’s extortion pure and simple.

What makes it even worse is the context in which these rules are set. They follow directly the 10 Commandments, which are prefaced by the declaration, “I the Lord am your God who brought you out of the land of Egypt, the house of bondage.” The celebration of freedom is followed, in other words, directly by an affirmation of slavery.

If they are consistent, the cancel culture avatars will train their sights on what they will no doubt depict as the Not-So-Good Book. As it happens, the canard that Pope Francis was intent on canceling the Bible already made headlines in 2018. He supposedly declared, “The Bible is totally outdated and needs a radical change, so The Bible is officially cancelled." PolitiFact rated this statement “Pants on Fire.” My guess is that the Bible, like Aristotle, is likely to be around for a good while longer.

Gunther Heilbrunn is a retired classicist living in Pittsburgh, Pennsylvania.