Will China Set Up an Air Defense Identification Zone in the South China Sea? 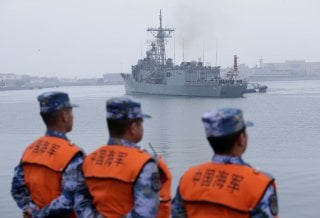 On May 4, Taiwan’s Ministry of Defense reportedly confirmed that China is planning to set up an air defense identification zone (ADIZ) in the South China Sea. According to a source from within China’s military, plans for the South China Sea ADIZ have been in the pipeline since 2010, the same year Chinese authorities told a Japanese delegation visiting Beijing that they were considering establishing an East China Sea ADIZ. Ever since China announced its first ADIZ in the East China Sea in November 2013, a Chinese ADIZ has hung like a sword of Damocles over the South China Sea. On the day China declared its East China Sea ADIZ, the Chinese Ministry of Defense’ spokesman proclaimed, “China will establish other air defense identification zones at an appropriate time after completing preparations.”

If China sets up an ADIZ in the South China Sea, then it would not be the first in that theater. Early in the Cold War, the Philippine established its ADIZ in 1953, and South Vietnam also had one during the Vietnam War. Today, however, the Philippine ADIZ is inoperative, and the South Vietnamese ADIZ died forty-five years ago with the state that created it.

On the contrary, an ADIZ that follows China’s excessive and, from the perspective of international law, invalid maritime claims in the South China Sea would be highly disruptive. Thousands of flights every week, not just military but mostly civilian, not just international, but also domestic within Vietnam, the Philippines, and Malaysia, and regional within Southeast Asia, would be disturbed.

Will China set up an ADIZ in the middle of Southeast Asia? If it does, then when will it do so, and with what size and scope? More generally, how does one predict the Chinese ADIZ?

The Animal That Is China’s ADIZ

Observers who think this dog will eventually bark have the support of two paramount signs. In terms of official statements, China has never ruled out the possibility of another ADIZ in the South China Sea. Occasionally, sources close to the Chinese military told foreign journalists that China had plans and was ready to impose an ADIZ in the South China Sea. Statements aside, China’s facilities on the disputed islands in the South China Sea suggest their main job is to help China turn this maritime heart of Southeast Asia into Beijing’s own lake. Some of these facilities include four three-thousand-meter-long runways with hangars that can hold dozens of aircraft on Woody Island, Fiery Cross Reef, Subi Reef, and Mischief Reef and high-frequency radar stations on these islands and Cuarteron Reef. China has also deployed to these islands long-range surface-to-air and anti-ship missiles that can reach 250 miles (about 400 kilometers). More recently, satellite images detected KJ-500 air-born early warning and control aircraft, as well as KQ-200 anti-submarine patrol planes on Fiery Cross Reef. Imagery also shows a Type 071 (Yuzhao)-class landing platform dock in the harbor of the reef. The ship could be used to seize a disputed reef in the region. If these infrastructure and weapons systems are China’s instruments to achieve mastery of the South China Sea, then an ADIZ would provide a convenient legal ground for their deployment.

Observers who think the South China Sea ADIZ is a dog that never barks have different reasons to believe so. Some speculate that China has learned a lesson from its East China Sea ADIZ and concluded that this game is not worth the candle. As this argument goes, China’s ADIZ in the East China Sea, which is nearly seven years old now, is as effective as nothing. Setting up one more in the south would tarnish China’s international image and prompt other littoral states to declare overlapping ADIZs of their own. However, this is just one of many possible lessons China can learn from the East China Sea ADIZ. One Chinese analyst has argued to the contrary that the benefits it brings have outweighed the risks. If this reflects the thinking of the Beijing leadership, a Chinese ADIZ in the South China Sea is waiting in the wings.

Another reason that may render China’s plans for a South China Sea ADIZ forever plans is the possibility of tit-for-tat by China’s neighbors. These neighbors are holding cards that can deter China from declaring an ADIZ in the South China Sea. Vietnam can declare an ADIZ of its own over the Paracel Islands, which can reestablish some forms of Vietnamese administration over the islands, thus weakening China’s position. Vietnam and Malaysia can sue Beijing’s unilateral activities in their exclusive economic zones (EEZs), activities that are illegal based on the Permanent Court of Arbitration rulings of 2016. Vietnam and a post-Duterte Philippine administration can also grant the U.S. military regular access to strategic places on the South China Sea coast such as Cam Ranh Bay and Da Nang in Vietnam or Ulugan Bay, Subic Bay, and Zambales Province in the Philippines, thereby equalizing several advantages of China’s facilities on the artificial islands in the middle of the sea. Taken together these will redress the regional balance of power and neutralize China’s ADIZ.

But a hypothetical ADIZ by China in the middle of Southeast Asia can also deter others. If Beijing thinks an ADIZ works best when it is unborn, then it will keep it unborn.

Finally, the South China Sea ADIZ may already bark, but it is camouflaged as an exclusion zones not using the name of ADIZ, or it may be a quasi or de facto ADIZ that is undeclared but nevertheless actively enforced. In the view of the Philippine judge Antonio Carpio, China has already effectively enforced a quasi-ADIZ in the South China Sea by warning Philippine planes flying over the Spratlys via radio to “stay away from the area.” Ships and aircraft from Vietnam, the United States, Australia, and India, to name just a few, have also reported to have received similar warnings. However, China’s quasi-ADIZ appears to cover no more than twenty nautical miles from the shores of the Chinese-controlled features.

Why Does China Need an ADIZ?

People tend naturally to assume that an ADIZ is what its name implies—an air defense zone or a military tool of territorial control. But like any things invented by humans, it can perform many functions beyond the original one.

In the original function, an ADIZ is an early warning mechanism. When the United States created the first ADIZs during the Cold War, it wanted to reduce the risk of a surprise aerial attack from the Soviet Union. China today may be more concerned about surveillance and “freedom of navigation operations” (FONOPs) conducted by the United States than a surprise attack, but an early warning is always better than no warning.

In a second function, an ADIZ is an exclusion zone. China’s ADIZ in the East China Sea has taken this function, among others. By requiring even aircraft that transit the international airspace and not bound to China to identify themselves, that ADIZ provides a legal basis for denying foreign aircraft access to almost the entire East China Sea.

As China is engaged in intense sovereignty disputes with most of its maritime neighbors, an ADIZ can serve as a sovereignty marker. Although an ADIZ is itself not a territorial claim, it can be used to exercise some forms of sovereignty rights and administration over the airspace of a territory. Acceptance or acquiescence by foreign aircraft of an ADIZ may then be interpreted as recognition of the ADIZ-declaring state’s effective exercise of sovereignty over a territory.

As with everything else in the diplomatic realm, an ADIZ can be used as a bargaining chip, specifically to boost the position of the state that declares it in some game it plays with foreign states. This is also one of the functions of China’s East China Sea ADIZ. It has strengthened China’s position against Japan’s in their disputes over the Senkaku/Diaoyu Islands by 1) giving a legal basis for China to scramble its jet fighters against Japanese planes, 2) broadening the domain of physical dispute to include not just the islands’ adjacent waters but also their airspace, and 3) creating new facts on the ground. As two analysts have argued, “The PRC would acquire strategic advantage by asserting a maximalist position, then seeming to back down, while preserving some incremental gain—akin to a ‘ratchet’ effect.”