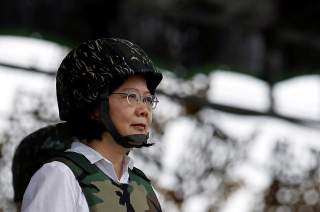 While analysts continue to pay close attention to the increasingly frequent passages by People’s Liberation Army vessels and aircraft near Taiwan, an equally important development is the ongoing saturation of Taiwan with information to overwhelm the population and create a sense of permanent crisis.

With every sign suggesting that President Xi Jinping will tighten the screws on Taiwan prior to—and possibly after—the 19th National Congress later this year, we can expect an uptick in PLA operations, including intrusions into Taiwan’s Air Defense Identification Zone and other forms of signalling meant to intimidate Taiwan. These exercises reinforce notions of powerlessness and inevitability, as well as serve to incrementally “normalize” such passages by the PLA by making them routine.

Alarming though this may be, these new developments should be regarded as part of Beijing’s propaganda strategy more than as preparation for use of force against Taiwan. Notwithstanding the widening capabilities gap between Taiwan and China, internal PLA reports continue to point to the immense challenge of initiating major military operations against Taiwan, the occupation of which would necessitate a highly risky—and potentially costly—amphibious assault. Therefore, predictions that the PLA could be ready to take over Taiwan by force as early as in the middle of 2018 or in 2020 (the latter is a timeline often used in Taiwan’s own military assessments) are arbitrary and probably do not reflect reality. Assuming continuity in the Cross-Strait relationship, Beijing will therefore remain extremely reluctant to embark on a major military campaign against Taiwan, especially given the difficulty in predicting how the United States, as well as Japan, would react to such a contingency—not to mention the potentially destabilizing effects in China should the campaign not go as planned.

Thus, while the shadow of China’s growing military is—and will remain—a matter of concern for Taiwan, it should not be treated as the foremost threat facing the island nation. In fact, focusing too much on the military threat risks distracting us from other, more pressing developments. Saber-rattling by the PLA is background noise. It is continuous and part of larger, non-kinetic strategy underpinning efforts to annex Taiwan without use of force.

The more immediate threat instead lies in the intensification of political-warfare efforts against Taiwan, from ramped up efforts by China’s United Front apparatus to recruit and co-opt academics, journalists and local officials in Taiwan and abroad to a major campaign of (dis)information saturation to distract from the real issues and create a sense of permanent crisis in Taiwan. The campaign is aimed at undermining democratic processes, eroding public support for the Tsai Ing-wen administration, and overwhelming the Taiwanese government by sapping its finite resources.

There is solid evidence to suggest that China has intensified its reliance on computational propaganda. It is now using bots, various social media (e.g., LINE, WeChat) and content farms (also known as content mills) to saturate Taiwan with pro-Beijing agitprop—the standard Chinese modus operandi. China is also using the bots to spread disinformation targeting the government, which increasingly has embedded itself into traditional (dis)information campaigns, pitting the Democratic Progressive Party against the Kuomintang (KMT). In other words, computational propaganda has allowed Beijing to insert itself into the battleground of domestic Taiwanese politics, so much so that various (dis)information campaigns can no longer be solely attributed to the KMT and other pan-blue forces, which adds to the confusion. In recent cases, Chinese disinformation efforts have overlapped with—and in some cases appear to have co-opted—traditional blocking action by opposition legislators and civic groups opposed to reforms. These recent cases include protests against pension reform, government plans to limit the (environmentally unfriendly) burning of large quantities of incense and ghost money at Buddhist temples, and limits for the Tsai administration’s Forward-looking Infrastructure Development Program.

Somewhat unfairly to the KMT, this propaganda pattern has resulted in accusations that the party as a whole is consciously colluding with the Chinese Communist Party, when in reality it, too, is likely being played by the Chinese. That is not to say that there are not some opportunistic elements within the blue camp (e.g., the New Party, Blue Sky Alliance, or leftover members of former chairperson Hung Hsiu-chiu’s Beijing-friendly mainlander faction in the KMT) who are indeed working with the Chinese side or its ideological allies in Taiwan (e.g., Chang An-le’s China Unification Promotion Party) to undermine the Democratic Progressive Party government. But given clear indications that Beijing has (rightly) lost faith in the KMT’s ability to deliver what it wants (i.e., unification), in many instances its efforts now deliberately bypass its former “ally” in Taiwan and seek to target local groups directly. These groups consist of officials, students, indigenous leaders, temple operators, small and medium businesses, crime syndicates. China lures them with incentives (financial, opportunities in China) and shares with them disinformation.

As its propaganda units and army of “freelance writers” who contribute to content farms disseminate various disinformation about the policies of the Tsai administration, Beijing also knows it can rely on traditional media in Taiwan to amplify the message through their own coverage, which—due to the competitive nature of Taiwan’s media environment—often entails poor fact-checking and attribution. Thus, a piece of (dis)information (or “fake news”) originating in China will often go through a process of circular corroboration by replicators—traditional and online media—in Taiwan. As a result, this (dis)information is normalized and becomes part of the narrative. Subsequently, the (dis)information becomes the subject of heated debates on evening TV talk shows, compelling the embattled (and distracted) government to respond with denials or corrections.

In recent weeks, disinformation has prompted television networks and national newspapers to debate whether President Tsai intends to destroy Buddhism in Taiwan and force the population to venerate Japanese gods. They want to know if a temple had insulted the “emperor” by inscribing her name on a red scroll during a religious festival/protest on Ketagalan Boulevard. They’re interested in whether the Democratic Progressive Party government is getting even with the KMT by taking away civil retired civil servants’ pensions. They discuss whether a young man who has been studying in China for years and is an intern with the pro-Beijing (and disinformation friendly) Want China Times acted improperly by lobbing water balloons inside the legislature last week after being led into the building with help from KMT legislative aides. Additionally, he  may or may not have been a member of the Communist Youth League.

When the authorities (and journalists) point to China’s “black hand” in all this, opponents counter that such claims are meant to tarnish their reputation or that the accusers have a “Cold War” mentality. Consequently, rather than debating about policy, the debate now is whether President Tsai is anti-religious (add the conservative Christians who argue that her government is trying to destroy the nation by legalizing same-sex marriage), anti-press freedom, anti-youth and ultimately undemocratic. None of this, in isolation, constitutes a threat to Taiwan’s democratic fabric. However, in the aggregate this can easily overwhelm a government and cause information overload among the population, which will increasingly find it difficult to prioritize the information they receive and tell signal from noise. Once this happens, most people will tune out, and the real issues that need careful study and deliberation, the necessary reforms that will benefit the nation, risk being lost in the cacophony. Absent a workable Taiwan strategy, the best that Beijing can hope to achieve in the immediate future is to undermine the island nation’s ability to further consolidate its democracy and strengthen its lines of defense against Chinese annexationism, with the ultimate goal of creating future conditions that may be more conducive to “peaceful unification.”

If you can’t control the message, take that control away from your opponent by making sure the message gets lost.

It will take extraordinary diligence on the part of the Taiwanese government and members of society to ensure that decisionmakers and people of influence do not lose their ability to focus on the issues that matter. If they get lost in the maze that Beijing is busy building for them, then it might be very difficult to find the way out.

J. Michael Cole is a Taipei-based senior fellow with the China Policy Institute, University of Nottingham, and a research associate with the French Centre for Research on Contemporary China. He is chief editor of Taiwan Sentinel and project coordinator of the Taiwan Foundation for Democracy’s Taiwan Democracy Bulletin.