Will China's Economic Collapse Save the South China Sea? 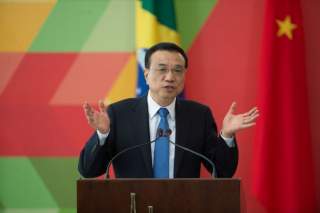 Not too long ago, the Chinese economy appeared to defy both gravity and doomsayers. Despite years of unbalanced growth, Beijing has managed to rely on investment to power its economy and keep growth high. The country’s binge on credit since 2009, which has brought the debt-to-GDP ratio close to 300 percent, a perilous level for an upper-middle income country, has not triggered a financial crisis. Its real estate bubble, perhaps the largest the world has ever seen in terms of completed but unoccupied residential housing, is leaking air but has yet to crash totally.

It was this appearance of economic invincibility that has emboldened the Chinese government to embark on an ambitious but highly-risky new foreign policy in the last few years. Many Chinese elites saw the United States and the rest of the West as in inexorable decline and China’s rise unstoppable. Hubris has led to the adoption of economic and security policies that would certainly make the late Deng Xiaoping turn in his grave. Instead of maintaining a low profile, Beijing has greatly extended its economic commitments abroad and begun openly challenging the U.S.-led security order in East Asia.

On the economic front, China has committed over $100 billion to capitalize the Asian Infrastructure Bank (AIIB), the New Development Bank, and the New Silk Road Fund, a set of financial institutions and vehicles designed to extend Chinese influence abroad and actively compete against existing international financial institutions such as the Asian Development Bank and the World Bank. In the developing world, China has also bet heavily on exploiting natural resources and large infrastructure projects. In Latin America, China has loaned out nearly $120 billion since 2005. In Africa, Chinese investments and development loans are estimated to have exceeded $100 billion. Faced with a rival backed by nearly $4 trillion in foreign currency reserves, all the West could do was to worry privately but complain publicly about China’s inadequate environmental and human rights practices in its investment activities abroad.

The boldest step China has taken in the context of its apparent economic strength is, without any doubt, its approach toward territorial and maritime disputes in East Asia. While previous leaders deliberately shelved the intractable and potentially dangerous disputes over the Senkaku/Diaoyu Islands and the South China Sea, the current Chinese leadership has taken a far more confrontational approach in the belief that, with its growing economic strength and military power, China no longer needs to be deferential to the interests and sensitivities of the United States and its allies in the region. As a result, in the last two years, China has escalated tensions by establishing a controversial Air Defense Identification Zone (ADIZ) over the disputed Senkaku/Diaoyu Islands and built several large artificial islands in the contested waters of the South China Sea.

Now that China’s economic engine is finally stalling and its weaknesses are inescapably visible, the obvious question is whether China can continue to sustain its assertive foreign policy. Based on past Chinese behavior and existing hard constraints, it seems that, if there is anything positive coming out of China’s economic unraveling, it will be a less assertive foreign policy.

Despite the enormous foreign policy risks taken by President Xi Jinping, cautious pragmatism has been the modus operandi of Chinese leaders in the post-Mao era. Xi’s three predecessors, Deng Xiaoping, Jiang Zemin, and Hu Jintao, were all keenly aware of the disparity of power between China and the West, particularly the United States. As such they made substantial foreign policy concessions when China’s economic weakness dictated a cooperative foreign policy. For example, Deng did not allow the issue of American arms sales to Taiwan to block the development of U.S.-China commercial relations. Jiang exercised enormous restraint over the Taiwan issue in the late 1990s so that the United States could support China’s entry into the WTO.

If Chinese growth in the short-term requires more exports to the West, it is inconceivable that Beijing can succeed in this task while sticking to its aggressive policies in the South China Sea.

At the same time, declining economic fortunes at home will also significantly limit Beijing’s capacity to finance its grandiose and risky economic projects in the developing world. Given the falling commodity prices and the dubious economic justifications for these projects, we should expect a wave of defaults in the coming years, both embarrassing Beijing and testing its ability to pour money down a rabbit hole.

Most importantly, continuing economic weakness will necessitate redeploying China’s limited financial resources to sustain domestic growth. Since the Communist Party’s rule rests on its economic performance, if President Xi is forced to choose between external glory and regime survival, no one should doubt which choice he will make.

So the silver lining in China’s economic maladies is that Asia’s new sick man is not as threatening as when he was strong.