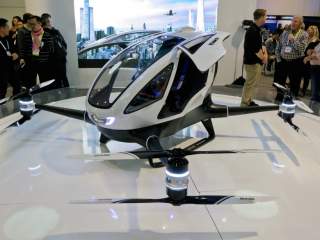 Will tomorrow's soldiers be transported into battle by drones?

There was no mention of that amid the hoopla when Chinese manufacturer Ehang unveiled what it called the world's first passenger drone at the Consumer Electronics Show earlier this month. The Ehang 184 is about the size of a golf cart, a 5-foot-tall, 440-pound, all-electric helicopter that sort of resembles a big bicycle trailer with four arms and eight rotors.

The company describes the 184 as capable of carrying a 220-pound passenger for 23 minutes at a speed of 60 miles per hour. The 184 "is a manned drone capable of automatically carrying a passenger through the air, simply by entering a destination into its accompanying smartphone app," the company boasts. "Due to the 184's fully automated navigation, made possible by Ehang's 24/7, real-time flight command center, passengers have no need for a pilot's license—they simply sit back and let the drone take over from there."

Ehang CEO Huazhi Hu says his goal is to make flying easier and faster for people, as well as revolutionize commercial flight in areas such as medical care, shipping and retailing. But even with all the media frenzy over an aircraft that George Jetson might have flown, there was no mention of using it as a battlefield transport, yet.

But that is almost certain to happen. Already the Pentagon has experimented with cargo drones in Afghanistan. At the same time, the U.S. military is aggressively pursuing "manned-unmanned teaming," where the pilot of a manned aircraft, such as an Apache helicopter or F-35 fighter, controls multiple drones. In fact, U.S. Army scientists recently noted that as "Army aviation continues to implement increasingly advanced levels of automation, human operators will transition from their current roles actively piloting vehicles to serve instead as Mission Commanders supervising highly intelligent autonomous systems."

The natural convergence of these trends is a transport drone for military personnel. The advantages are obvious: smaller and cheaper aircraft that only need a passenger compartment, without the extra weight and cost of a cockpit and trained pilot.

However, like many ideas that look good on paper, there are downsides in practice. Much like the self-driving car, the question is, would you want to be the first to climb into one of them? Ehang does say that it puts safety first, with redundant flight controls and sensors, as well as a fail-safe system that automatically lands the quadcopter if a major malfunction is detected.

Whether this is sufficient to reassure consumers into paying $200,000 to $300,000 remains to be seen. As for the military, the reaction will be interesting. Already nervous about drones replacing their fighter jets, the military aviation community is not likely to welcome robotic helicopters and transport aircraft. Your average infantryman may not be that keen into getting into a flying robot, either. There will be fears of software malfunctions, or automated systems too rigid to handle changing battlefield conditions. Not to mention the threat of hackers ordering the drone's navigation system to deliver its passengers to the nearest prisoner-of-war camp.

But many of the same concerns apply to drones in general, yet the Pentagon can't get enough of them to meet demand. One can see, for example, special operations forces using transport drones to drop in on their objectives in a small, unobtrusive aircraft. Or, better yet, search-and-rescue drones sent in to hazardous areas to recover downed pilots. How ironic that would be: an unmanned aircraft rescuing the pilots who scorn them.

Someday, like a scene out of "Apocalypse Now," a fleet of transport drones may swoop in out of the rising sun to drop an infantry company on a village. For now, we just have a Chinese company that says it has invented a people-carrying flying robot. But regardless of whether the Chinese drone is a commercial success, the day is coming when drones carry soldiers into battle.