Will Congress Boldly Go For the Space Force? 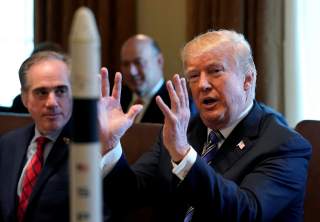 Last Tuesday, President Donald Trump signed Space Policy Directive-4, which orders the Department of Defense to establish a Space Force. According to SPD-4, the Space Force would initially operate under the umbrella of the Air Force, similarly to how the Marine Corps operates within the Navy. Administration officials have also stated that their long-term goal is for the force to become an independent branch of the military.

But President Trump still needs congressional approval to move forward with his plan. Given that Republicans no longer control the House and support for a space force among Senate Republicans is far from universal, this could be a bigger hurdle than he might have initially estimated.

While its detractors are vocal, the Space Force has its supporters. A popular topic at rallies, many of the president’s followers have embraced his call for a new military branch. The administration even held a contest back in August on possible logos. But public support is divided along party lines. Last November, a survey by the Ronald Reagan Presidential Foundation and Institute revealed that compared to Democrats, Republicans support the creation of a space force by a margin of 2:1.

Until now, a lack of specifics has left it difficult to accurately assess whether certain congressional members would support a space force. Placing the new branch within the Air Force is undoubtedly a bid to increase support from within Congress and the Department of Defense (DOD). Last September, Rep. Adam Smith (D-WA), now the chairman of the House Armed Services Committee, opposed the idea of a space force, stating, “What I oppose is a separate branch. I don’t think a separate branch makes sense.” But just this past January, Smith took a more optimistic tone, calling the slowly unfolding plan “a promising proposal.”

Under Republican leadership, the House was generally supportive of military space reforms. In fact, the House version of the 2018 National Defense Authorization Act (NDAA) contained provisions to create a “space corps.” These were removed from the final version of the 2018 NDAA in what was seen by some as a victory for the Air Force. But with the Democrats now in charge of the House, whether the Space Force can make it into the upcoming NDAA remains to be seen.

Rep. Mac Thornberry (R-TX) thinks there is still significant bipartisan support for some sort of space force. Indeed, the initial space corps proposal in the 2018 NDAA did garner some bipartisan support from Alabama Republican Rep. Mike Rogers and Tennessee Democratic Rep. Jim Cooper, then chairman and ranking member (respectively) of the House Armed Services Strategic Forces subcommittee. Yet Thornberry, the former chairman of the House Armed Services Committee, warned DOD officials: “Our job is not to just swallow whatever [the administration] send us.”

Despite retaining Republican control, the Senate may actually be a harder sell. Senate Armed Services Committee Chairman James Inhofe (R-OK), who is usually a supporter of the president, left the Space Force off his list of top priorities for the next NDAA in December. “It wasn’t on my list because I don’t think we need it,” he stated. “Ever since this subject came up, I’ve said there are two things you have to answer. One is, is it going to do a better job than [what] we’re doing today? And then two, it’s going to cost more—how much more money is it going to cost?”

In fact, both Republicans and Democrats have questioned the cost of a branch of the military devoted solely to space. And Democrats have been wary of additional spending hikes when it comes to defense. While the announcement that the Space Force will be part of the Air Force suggests a leaner force than initially predicted, we’re still missing key details about the new military program—primarily its price tag.

In response to President Trump’s charge for the Pentagon to begin drafting legislation, the Union of Concerned Scientists warns that the creation of a space force might lead to a greater weaponization of space. Space is certainly at risk of being weaponized, but the administration’s first opponents aren’t necessarily other nations across the world; they might be individuals right across the aisle.

Kathryn Waldron is a National Security and Cybersecurity Research Associate at the R Street Institute and a Graduate Research Fellow at George Mason University.