Will Congress Reclaim Its War Powers? 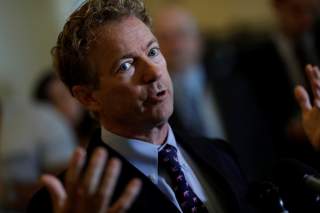 Today in the Russell Senate Building, a high-level group of speakers examined the future of war powers and American foreign policy. The event, sponsored by the National Interest, the Nation, the American Conservative, and the Committee for Responsible Foreign Policy, brought together experts and members of Congress, including Senators Rand Paul (R-KY) and Tom Udall (D-NM), to discuss the conflicts in Afghanistan, Yemen, and elsewhere.

“We have been cursed, or blessed depending on your perspective, to live in interesting times (politically),” said James Antle, editor of the American Conservative, in his opening remarks. The past few months have seen some victories, such as Donald Trump’s announcement in December that U.S. troops would be leaving Syria, or Congress’ invocation of the War Powers Resolution on Yemen. However, congressional pressure has slowed the Syria pullout and President Donald Trump is expected to veto the resolution. “There’s a schizophrenic quality to the Trump administration,” said Jacob Heilbrunn, editor of TNI. He noted, “Congress has been an enabler of the national security state” that prefers to “carp from the sidelines” rather than take direct responsibility by voting on issues of war and peace. At the same time, “America wages war by the credit card,” Heilbrunn said. While the recent record was mixed, both editors agreed that it was promising they had such a prominent lineup right in the middle of Congress.

The first panel, moderated by retired Colonel Lawrence Wilkerson, who served in the George W. Bush administration in the State Department as an aide to then-Secretary of State Colin Powell, discussed the drudgery of continued fighting in Afghanistan. It included the Nation’s Robert L. Borosage, Senior Fellow Daniel L. Davis of Defense Priorities, former military intelligence officer Nathan Jerauld, and Christopher Preble from the Cato Institute. All stressed the pointlessness of the Afghan war, and that immediate withdrawal was the best strategy for the United States.

The highlight of the event was a dialogue between Senators Paul and Udall. “My personal belief is we’ve been at war too long and in too many places,” said Paul. “I don’t think there’s a name left of anyone who had anything to do with 9/11 [that the United States hasn’t captured or killed]” said Paul, who has argued for years that Congress should repeal the 2001 Authorization for the Use of Military Force (AUMF). He didn’t understand why the United States was still fighting in Afghanistan so many years after it had flushed Al Qaeda out of the country. “Really? seventeen years is precipitous?” Paul asked rhetorically, referring to defenders of the war who say it is much too early to announce a withdrawal date. “Leaving becomes an impossibility,” he concluded.

Taking a moment to opine on America’s European allies, the senator said, “She [German Chancellor Angela Merkel] expects us to pay the bills for NATO,” while new countries keep getting added that merely act as possible tripwires. “I’m for more diplomacy with Russia, even North Korea,” said Paul, an uncommon position in this Congress. Paul proposed ending sanctions on Russian legislators, so they would have the opportunity to come to America and see its bounty firsthand. Paul concluded by announcing he was working on a bill that would strip emergency powers from the presidency.

Udall, who will not be seeking reelection in 2020, focused his remarks around the question, “Why aren’t we doing more?” He was referring to his fellow members of Congress. “If we don’t work together, we abdicate this power to the executive,” he warned. Agreeing with Senator Paul, Senator Udall said that while he voted for the original AUMF, he never imagined we’d still be in Afghanistan eighteen years later. Referring to U.S. involvement in Syria as “an invasion,” he complained that Congress never authorized intervention there.

In a follow-up conversation between themselves, Senators Paul and Udall went back and forth on a range of issues. Udall alluded to Senator William Proxmire (D-WI), who during the Vietnam War solicited the advice of real experts who brought some truth to the corridors of Congress. The retiring senator said he’d like to spend his last two years in office doing something similar, finding “balanced witnesses” who believed in a more restrained foreign policy to speak in front of congressional committees. “I’ve talked to the president a lot about regime change,” said Paul. While Trump has always been consistent about the disastrous decision to invade Iraq, Paul worried that the administration was “too flippant” about the possibility of war with Iran. Udall added that he had voted against the Iraq War, and that it was known at the time that the WMD situation was exaggerated. Making one final point regarding the U.S. relationship with Saudi Arabia, Paul said we should keep them at arms-length: “You don’t have a right to our arms,” he said, alluding to his repeated calls for ending weapon sales to the kingdom.

The senators were followed by a House panel featuring Congressmen Thomas Massie (R-KY), Ken Buck (R-CO), and Andy Biggs (R-AZ). All three were very pessimistic about the congressional process. Buck said it took all three members fifteen minutes to realize “this is the swamp.” Massie said he wished that he could blame the problem on the likes of John Boehner or Paul Ryan, but that the truth is most of his colleagues want to ignore issues of war and peace on purpose.