Will Coronavirus Create a Food Shortage? 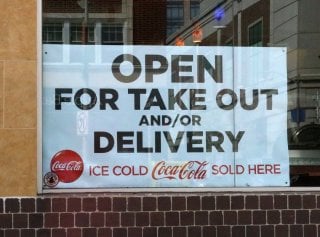 As the numbers of those infected and dying from coronavirus rises and the ranks of the unemployed rapidly rockets upwards around the world, there are increasing worries over food cultivation, distribution and worker health. Pictures in the United States of long lines at food distribution centers and stories of them running out of food inject a 1930s-like chill factor. Although it is too early to be declaring a food security crisis, the seeds for such a development are possibly being planted, which could lead to social turmoil. The risk is the creation of a food crisis when there really isn’t one–yet. Governments around the world, including in the United States, need to find a more coordinated approach to this challenge; failure to do so could inject a degree of social unrest into a situation already marked by massive economic disruption.

The food challenge revolves around supplying enough food to feed people during a major pandemic. Stated in another way, what is the balance between the actions being taken to stop the spread of the coronavirus (including the shutting down of large parts of national economies) and the cultivation and distribution of food products (which eventually means a meal on the table). While the closure of restaurants and bars has caused a disruption in longstanding food supply and demand practices, there is a growing need in other parts of society as people lose their jobs, panic-buying takes place and prices for some goods have become scarce.

Starting at the ground level, there is a significant challenge for the workforces needed for the cultivation of food crops being able to assemble due to restrictions on labor movement (especially if it involves the cross-border movement of workers). In Europe the move to close national borders was undertaken without much thought given to the seasonal movement of workers from Eastern Europe (Romania, Bulgaria and Poland) or North Africa (Morocco and Tunisia) to Germany, Italy and France.

Travel restrictions in Europe have reduced seasonal migration to a trickle just as farmers gear up for the harvest and just as stockpiling of food is rising. Efforts to find local workers, including students and those laid off from the hospitality and entertainment sectors, apparently have not been going terribly well. As Laura Wellesley, a research fellow at London’s Chatham House, noted (March 27, 2020): “One of the big concerns is that we will see significant labor shortages along the logistical supply chain. If we see a shortage of migrant workers, then you’re looking at a real supply shortage.”

Germany went back on its initial decision that barred seasonal workers from recognizing its need. But that does not resolve the problem as Austria, Hungary and other countries have closed land borders, disrupting overland routes from Eastern Europe.

The United States faces the same problems.  U.S. agriculture has already been struggling to meet labor needs. As Zippy Duvall, the president of the American Farm Bureau Federation, noted in 2019: “Farmers and ranchers in every state tell me that the shortage of labor is the greatest limiting factor on their farms.” Duvall also indicated that the H-2A visa program (for seasonal foreign workers) was inadequate, with 2018’s 243,000 H-2A workers filling just a fraction of the more than 2.4 million farm jobs. In 2019, the State Department issued 204,801 H-2A workers from around the world (more than 180,000 were from Mexico).

The U.S. agriculture labor pool has been hurt by aging, the unwillingness of many Americans to enter the sector, and the Trump administration’s push to trim the ranks of undocumented workers. In response to the threat from coronavirus, the Trump administration in early March 2020 shut down the consulates in Mexico where locals get their visas to go north to work. This created a backlash with many U.S. farmers complaining to Washington. The administration’s response was that “they were reviewing all possible options” to prioritize H-2A applications, “given the significant economic performance of these workers for farmers and small business.” The U.S. authorities indicated that they are not issuing new H-2A visas, but workers who are eligible for an interview waiver would be issued renewals without having to go to a visa appointment. There are questions as to whether this will be enough.

The next question is once crops are cultivated, someone needs to process them as well as get them to market (including aircraft, trains, trucks, ships and harbors), and once at the market destination, someone is needed to unload and make the food available. Although a certain degree of automation is used human touch remains part of the process. Considering the pressure to impose lockdowns on large blocks of populations, the delicate question presents itself—who is going to do the human part of the work in getting food to the consumer’s table?

In early April the issue of the human element became more evident with reports that there has been a spike in coronavirus and a small number of deaths at meat plants in the United States, including at a JBS SA beef facility in Colorado, a Cargill meat-packing plant in Pennsylvania and a South Dakota Smithfield Foods pork facility (the last of these accounts for 4 percent of U.S. pork production). Although the companies responded with temporary closures and cleanups, workers in some cases have threatened to go on strike unless work conditions are improved. This, of course, has an impact on already nervous consumers.

Large food chains (like Kroger, Target and Walmart) are stepping up to keep a steady supply of food for consumers, especially in advanced economies. Indeed, the situation is helped by e-commerce and delivery systems that bring food to the door. However, food delivery implies certain other factors—a steady supply of food, access to a computer, and an ability to pay. For those without access to the Internet at home or hard-pressed on the financial side (with a massive spike in unemployment looming in a number of countries), home delivery is not going to be the answer. Moreover, it still does not resolve the issue of food production and its supply chains.

While the United States and much of Europe are capable of feeding themselves, other countries do not have the same luxury. This is especially the case when considering two of the world’s key staple crops, wheat and rice. If the major wheat and rice producers close down their exports, then this becomes a massive problem. Kazakhstan, a sizable exporter of wheat, suspended exports (from March 22 to April 15) of socially significant food products (such as wheat, sugar, and vegetables) to guarantee the domestic supply. Russia also moved to briefly suspend some key exports as well as did Vietnam with rice in March. Vietnam was to later resume rice exports in April.

The issue facing many wheat and rice importing countries is how do they adjust when a key food supplier is suddenly not available? Although Russia and Vietnam have resumed food shipments, if export bans are reinstated for a lengthy period of time, then there are concerns over how local populations will be fed. Major food importers like Algeria, Egypt and Indonesia have large populations and fragile medical systems, not a good combination at this juncture. Many governments (including a large number of sub-Saharan Africa) could be left with trying to figure out what is the bigger problem—the spread of coronavirus or the lack of food?

One of the major concerns with food security pertains to how failures in feeding populations can result in socio-political turmoil. This has a long history, dating back to ancient periods when crops failed and populations were forced to migrate or die. Other cases involved a government’s failure to maintain the conditions for crop cultivation and distribution of food, leading to famine (a constant theme in Chinese dynastic history). Plagues have also had a similar impact on societies. Indeed, Thucydides notes that the plague which hit Athens in 430 BC led to “a state of unprecedented lawlessness . . . the catastrophe was so overwhelming that men, not knowing what would happen to them, became indifferent to every rule of religion or law.”

The connection between food security and socio-political stability has hardly gone away. In 2007–2008 severe droughts caused food riots in Africa. In 2010 a Russian wheat export ban resulted in food price inflation and supply problems throughout North Africa and the Middle East. In the latter case food problems helped push the region into a wave of socio-political disruption that toppled governments in Tunisia, Libya, and Egypt and was felt in the Persian Gulf and Syria. Food has factored into riots and political unrest in other countries as well, including Haiti. Cuba also has major food security challenges, caused by a combination of decades of economic mismanagement, U.S. sanctions, and a heavy dependence on food imports.

The countries most dependent on food imports to feed their populations are generally located in sub-Saharan Africa, with the largest of these being the Democratic Republic of the Congo, Ethiopia and Kenya. Outside of Africa, the ranks of those dependent on food imports include Iraq, Syria and North Korea. One of the major worries in a number of these countries is that central authority is weak, medical systems are fragile and it will not take much to endanger food supplies.