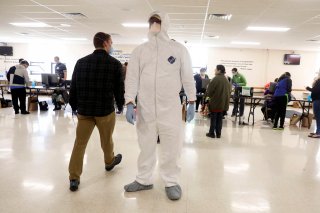 In June 2019, Kazakhstan held an election for president. Once assumed to be president for life, Nursultan Nazarbayev, had just resigned and this was the first election to replace him. Nevertheless, Nazarbayev’s power loomed large over the election. He retained the title of “First President.” He was the leader of the ruling Nur Otan political party and would remain as the life-long chair of the Kazak security council. Worse, the powers of his ruling government were vast, and civil liberties really hadn’t become part of the democratic culture of this former Soviet republic.

Election observers from around the world streamed into Kazakhstan to observe the conduct of the presidential election. In this context, we can see the value of an election conducted in the open, in polling places, and not behind closed doors. In other words, while transformative advocates in the United States seek to use the coronavirus pandemic as an excuse to fundamentally transform how Americans elect a president—largely through federally mandated vote-by-mail schemes—the experience in other countries illustrates the importance of transparency.

It is dangerous to send elections behind closed doors into living rooms and other corners beyond the eyes of the public no matter if they are in Kazakhstan or the United States.

If countries like Kazakhstan held elections by mail, the 209 observers sent by the Organization for Security and Cooperation in Europe could not have observed the election process. Indeed, they were able to monitor 1,325 actual polling sites to assess compliance with basic standards of fairness and lack of coercive influences. Had the election been scattered through the exclusive use of mail balloting, observers could not observe the election. Worse, agents and partisans would have enjoyed unimpaired ability to influence and coerce the electorate in their homes and behind closed doors.

Open elections conducted with observers directly monitoring the voting process is an important attribute of a free society. It allows third parties to watch. It discourages partisans from badgering voters, leveraging power over them as they cast ballots, and prevents someone other than the voter from marking and casting a ballot.

That’s what was most troubling about House Speaker Nancy Pelosi’s gambit in the first round of coronavirus relief in Congress. Initially, Pelosi advocated legislation—legislation that actually passed the House—that would have fundamentally transformed American elections.

Pelosi’s 880 page H.R. 748 passed the House mandated federal same-day voter registration, an expansive month-long election, and worst of all, mandated that the election must be conducted by mail.

Pelosi wanted to put the election into the hands of the same people who routinely deliver to your house your neighbor’s mail.

Not only was Pelosi’s plan a logistical horror, it was a Constitutional insult. Under our Constitution, states are given the power to run their own elections. Sure, there are a few limited exceptions such as the Fifteenth Amendment, which prohibits racial discrimination.

The Constitution also contains an “elections” clause that gives Congress the reserved power to set rules for the “time, place and manner” of holding congressional elections. But the Founders put this in the Constitution so that states could not suffocate the Federal government by refusing to hold Congressional elections. This provision was meant to be a lifesaver, an emergency provision to ensure the continued existence of the federal government in response to state hostility toward its existence. It was not meant to be an omnibus tool for a federal takeover of state powers to run their own elections on the whimsy of an emergency.

The Founders knew that decentralized control over elections promotes individual liberty. Centralized power, in their experience, was not to be trusted. Centralized control over elections is especially dangerous because centralization provides a malevolent actor a single apparatus to cause mischief. Control that centralized authority, then control the outcome of elections. Delegating to states the power to design the electoral architecture for that state puts power closer to the people. If a state wants to vote by mail, for example, then that state can enact or repeal it through representative government.

Pelosi’s gambit failed thanks to Senate Majority Leader Mitch McConnell (R-KY) and Senator Richard Shelby (R-AL) holding the line. It didn’t hurt that President Donald Trump is highly conversant in the lexicon of process, understanding how the electoral process can dictate broad national policy. Small numbers of fraudulent votes spread across a state can alter the course of history. Remember, a President was elected in 2000 by a 527-vote margin in a single state.

But the transformative agents aren’t done exploiting the coronavirus. Most recently, former Attorney General Eric Holder, perhaps the most aggressive transformative agent of a transformative Obama era told Time magazine, the “coronavirus gives us an opportunity to revamp our electoral system so that it permanently becomes more inclusive and becomes easier for the American people to access.” Of course, registering to vote and voting has never been easier than it is in 2020, but that isn’t enough for Holder or Pelosi. They don’t want to let this crisis go to waste.

I have been litigating election law issues since my time at the Justice Department Voting Section fifteen years ago. I have testified repeatedly to Congress about the election process and been appointed by the president to serve on his advisory commission on election integrity. Throughout this time, I have never seen the entire institutional infrastructure of the Left arise and activate so swiftly as they did around the issue of federally mandated all-mail balloting.

From unions to peace activists to green energy zealots, to abortion advocates, all of them mobilized while Congress was debating coronavirus relief. They weren’t calling for drug approvals, respirators, coronavirus testing, relief for small businesses, or anything even remotely related to disease prevention. Their top priority was federal mandates over how state elections are run.

Even when Pelosi was losing, and abandoning all of her other add-ons to the coronavirus relief package, her final lone holdout issue was, if you can believe it, all-mail federal ballot mandates.

Think about that for a bit. Even if you don’t bring a long history of experience to the issue of election process rules, ask yourself why, of all the possible golden cows the Democrats could attach to a must-pass bill, was a federal all-mail ballot mandate their final demand? It should shake any skepticism that you might have about how central election process rules are to the Democrats tools to transform broader national policy.

Don’t take my word for it, listen to what they say. Even the Sierra Club and Union of Concerned Scientists have joined the frenzy for federal mail ballots. The Union of Concerned Scientists, you ask? The same group who existed primarily to hector President Ronald Reagan for putting Pershing II missiles in western Europe? Yes, the very same group now has moved from amplifying Soviet propaganda to demanding federal mail ballot mandates. This demonstrates how some of the most corrosive organizations that undermine American national security view what some might consider to be a boring process sideshow. Process matters to them, and it should to you.

Vote by mail puts our elections behind closed doors. When I was a Justice Department lawyer, I tried and won a case involving abuses of voters and rank voter fraud that relied on vote by mail. The case was United States vs. Ike Brown. The case involved a political machine in Noxubee County, Mississippi. The machine used mail ballots to preserve their power. The machine sent swarms of notaries (Mississippi law requires a notarized witness to a mail ballot) into living rooms and kitchens. The notaries would snatch mail ballots from mailboxes and vote the ballots themselves instead of the voters casting the ballot. The voters whose votes were stolen were usually poor minorities. In contrast, the notaries were well connected to the powerful in these small rural counties. In places like Noxubee, connections to government officials can mean the difference between affording groceries and Christmas presents, or not.

Transparency of the voting process is one of the central hallmarks of fair elections. When all interested parties can watch the voting process, partisans are more likely to accept the results of elections, even the results they don’t like. In other words, transparency promotes national stability. Doubt about electoral outcomes is corrosive to national unity. Nothing sows doubt more than an electoral system where the voting is done behind closed doors.

Some will crow that Oregon and four other states have had no problems with an all-mail ballot system. Except, that isn’t true. Lafayette Keaton, for example, kept voting the ballot of his dead son in Oregon until he was finally caught. One survey showed that up to five percent of Oregonians admitted they allowed someone else to cast their mail ballot. Whether it is 5 percent or one percent of people casting illegal votes in someone else’s name, it is too many.