Will Donald Trump Push Pakistan over the Edge? 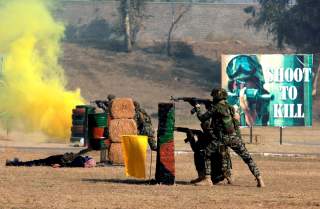 Pakistan and the United States appear to be heading toward a more contentious phase of diplomatic arm wrestling in the wake of President Donald Trump’s announcement of the new Afghanistan strategy.

Two separate visits to Islamabad by mid-level U.S. officials were postponed at the request of the Pakistani government. Alice Wells, the acting assistant secretary of state for South and Central Asia, and Lisa Curtis, the senior director for South and Central Asia at the National Security Council, were to meet with Pakistani officials, probably to deliver tough messages from the Trump administration on its expectations for Pakistani action against the Haqqani network and Taliban safe havens inside Pakistan.

The postponement of the visits by Curtis and Wells is more than an attempt by Pakistan to signal its displeasure with Washington’s new Afghanistan strategy. Pakistan is also taking the time to demonstrate that it has the diplomatic support of regional states. Officials in Beijing, Moscow and, it seems, even Tehran have gone to bat for Pakistan, and Foreign Minister Khawaja Muhammad Asif could be headed to China, Russia and Turkey.

Some figures in the Trump administration support the potential future option of diplomatically isolating Pakistan. But that is a much tougher task today than in the not-so-distant past. As U.S.-Pakistan relations took a nosedive in 2011, Islamabad began to diversify its foreign-policy ties, reducing its dependence on Washington for economic and military assistance. The diplomatic isolation option also looks less promising given that Trump’s speech neglected to mention regional powers (and UN Security Council permanent members) China and Russia. (Surprisingly, Trump also failed to thank NATO allies for their support since September 11.)

Islamabad is also pushing back against U.S. framing of the Afghanistan insurgency as a problem based in Pakistan. Pakistan’s National Security Council issued an official response to the Trump speech in the form of a rather long and strident statement, which asserted that “scapegoat[ing] Pakistan will not help in stabilizing Afghanistan.” The Pakistani NSC statement also seemed to draw a redline: “The Afghan war cannot be fought in Pakistan.” Where that red line is exactly and to what extent Pakistan is willing to enforce it are unclear. The ambiguity is most likely intentional.

So what does Islamabad ultimately want? Like previous tense periods in the U.S.-Pakistan relationship, in the past week, Pakistani officials have made nationalistic statements. Also, groups historically linked to the Pakistani military have taken to the streets. As a result, one may reflexively—and, I think, mistakenly—read Islamabad’s behavior in one of two ways. One is that Pakistani leaders are simply playing to their domestic audience before they strike a deal with Washington, privately making concessions. And the other is that Islamabad is delaying the administering of tough medicine by Washington by manufacturing a crisis—escalating and then seeking an off ramp—with the result being a reversion to the status quo.

While the Pakistani request for the postponement of the U.S. officials’ visits is probably ill advised, Islamabad is engaging in more than mere posturing. Pakistan aims to constrain U.S. kinetic options in its sovereign territory and direct U.S. attention toward efforts—border security coordination, refugee repatriation and a revival of peace talks—that ensure a durable end or better management of the violence stemming from the Afghanistan war, which Pakistan has had to deal with for roughly forty years.

Pakistan also would like greater clarity about the new U.S. strategy in Afghanistan, insofar as there is an actual strategy.

Islamabad is concerned about the direct and indirect effects of an escalation in violence by the United States in both Afghanistan and Pakistan. The Pakistani army has conducted what can roughly be described as sequential counterinsurgency operations in each of its seven tribal agencies bordering Afghanistan, combined with an urban counterterrorism campaign, with significant success. Civilian deaths due to terrorism were 80 percent lower in 2016 compared to 2013. How will the new U.S. strategy toward the region impact Pakistan’s hard-won gains? Will the influx of a modest number of U.S. forces operating under relaxed rules of engagement weaken the insurgency? Or will the insurgents resolve to prolong their fight and escalate into a more brutal campaign? Will that result in population outflows (including militants) from Afghanistan into Pakistan? These are some of the questions that are likely on the minds of Pakistan’s strategic planners.

Finally, there is also the question of how Washington intends to deal with Afghanistan’s political transition, which may be the elephant in the room. Parliamentary elections are scheduled less than a year from now and President Ashraf Ghani’s term ends in two years. The Taliban presently controls or contests roughly 40 percent of Afghan territory. Will it be possible to hold elections? Will the Taliban ramp up violence to obstruct the polls? And how will another delayed or disputed election impact the political divide in Afghanistan, which is already on a dangerous trajectory?

The view from Islamabad appears to be that there are many moving parts in Afghanistan—parts that are too many for Washington to handle on its own and too heavy for New Delhi to offer meaningful assistance. When the dust settles, it would behoove both countries to speak to one another, rather than at one another.

Arif Rafiq (@arifcrafiq) is president of Vizier Consulting, LLC, a political-risk advisory company. He is also a fellow at the Center for Global Policy and a nonresident fellow at the Middle East Institute.