Will Electric Cars Destabilize the World? 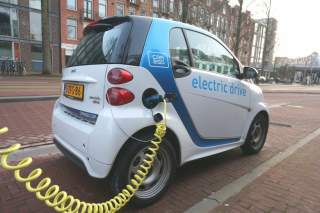 After a deep dive, oil prices are slowly crawling back up on the back of resurging demand from China and India in particular, as well as looming supply shortages from Nigeria to Venezuela. Yet oil markets are in for a rough ride, as uncertainties mount regarding oil’s continued predominance as transportation fuel in the coming decades. An accelerated adoption of electric vehicles would hasten the end of the oil era, and could cause significant geopolitical turbulence as producer countries heavily reliant on oil revenues will struggle to diversify their economies. We are already witnessing the destabilizing effects of low oil prices in the Middle East, while Russia’s aggressive behavior can also be partially explained by its domestic economic woes.

At first glance, oil producers should not be too nervous. The International Energy Agency predicts that before the end of this decade, we should expect oil prices to rebound in the 80-plus-dollar range, as demand will continue to rise and new sources of supply will need to be brought to production to replace depleting ones. Around 40 million barrels per day of new crude production will be needed by 2030 to offset declines and meet new demand, according to the consultancy IHS. There is plenty of room for oil demand to grow in emerging economies. India only has seventeen passenger cars per 1,000 people, compared to 540 in Germany.

But what if the transition from the internal combustion engine, the backbone of global oil demand, to hybrid and electric vehicles (EVs) will be faster than expected? What if—similar to the speed with which smartphones spread—EVs will penetrate the vehicle markets sooner and deeper? How will that impact oil demand and producers’ bottom line? How will it affect domestic stability in oil revenue–dependent economies such as Russia or Saudi Arabia?

EVs account for less than 0.1 percent of the global car market today, and OPEC believes they won’t account for more than 1 percent of all cars even in 2040. But that is likely way off the mark. Bloomberg New Energy Finance (BNEF) heralds the 2020s as the decade of the electric car. The unveiling of Tesla’s Model 3 is the harbinger of a new era of affordably priced middle-class EVs. According to BNEF, electric vehicles could displace oil demand by 2 million barrels as early as 2023 (assuming a sustained 60 percent annual increase in EV penetration) or 2028 (at a rate of 45 percent). That would create an oversupply of oil similar to the one that prompted the 2014 oil-price collapse.

Moreover, a study from Cambridge Econometrics and partners on oil market futures estimated that climate action, like better improved fuel efficiency standards and measures to facilitate the spread of EVs, may reduce oil demand by around 11 million barrels per day (mbpd) in 2030 and by 60 mbpd in 2050, compared to a business-as-usual scenario of growth from 94 mbpd in 2015 to 112 mbpd in 2030, and a further 35 percent to 151 mbpd by 2050. The dramatic drop in demand will also result in lower prices (24 percent and 33 percent, respectively).

That augurs immense difficulties for oil producers, many of whom are already in dire financial straits due to the current slump. Budget break-even prices for most producers are $100 or more per barrel. Russia’s finance minister warned that its reserve fund could be exhausted in 2016 if oil prices stay at their current level. Oil and fuel products account for 54 percent of Russia’s overall exports and 21.3 percent of its GDP. Saudi Arabia ran a 21 percent budget deficit in 2015. Venezuela’s budget deficit stood at 24 percent of GDP in 2015, and is slated to increase further this year, as the country is teetering on the verge of collapse.

Though all producers are struggling, in terms of oil’s overall importance in their economies, the countries most exposed are in the Middle East and Africa. Oil accounts for 56.8 percent of Saudi Arabia’s GDP, 55.6 percent of Iraq’s, 45.7 percent of Libya’s and 29.6 percent of Iran’s. Angola, Equatorial Guinea, Gabon and the Republic of the Congo are all dependent on oil for more than 50 percent of their GDP.

While some of these countries have begun to think in earnest about the diversification of their economies, as the recent unveiling of Saudi Arabia’s ambitious Vision 2030 shows, most countries lack the political will or the capacity to come up with and then deliver on a long-term economic reform agenda. Given the pivotal importance of many of these states and the fallout from their prolonged instability, the international community should be actively engaged in identifying and implementing diversification policies. The International Monetary Fund is particularly well positioned to assess and address pathways to more sustainable models of economic growth. A concept for an international stabilization and assistance fund for heavily oil-dependent economies should also be explored.

Curbing oil demand by accelerating the spread of EVs globally is an essential component to climate-change mitigation efforts. Diminishing oil demand would also be a boon overall for the world economy and for major consumers, such as the United States, the European Union or China. Yet the geopolitical ramifications of collapsing oil markets will need to be anticipated, and concerted efforts exerted, to mitigate the destabilizing effects.

David Koranyi is the Director of the Atlantic Council’s Eurasian Energy Futures Initiative.