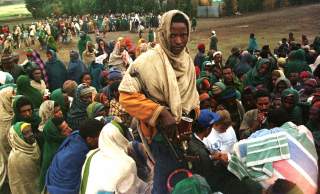 When Eritrea won its independence in 1993 after a thirty-year struggle against Ethiopia, there was optimism that peace would hold. Long-time dictator Mengistu Haile Mariam resigned on May 21, 1991, and fled into exile in Zimbabwe. Eritrean President Isaias Afwerki and the new Ethiopian leader Meles Zenawi had been comrades-in-arms against Mengistu's regime. It looked like the two would lead their respective countries into a period of both peace and prosperity. In a book review for the Financial Times, British writer John Ryle recalled a 1995 celebration in the northern Ethiopian town of Mekelle:

“The two guerrilla movements had fought together to defeat the Derg, then - unprecedentedly - agreed to an amicable secession. In western diplomatic circles, Meles and Isaias were being touted as a new breed of African statesman. That evening on the outskirts of Mekelle, I watched as Meles, Isaias and other guests, serenaded by Mahmud Ahmed, a veteran Ethiopian pop star, danced together in the moonlight.”

Such episodes would not last. Just three years later, a series of skirmishes between Eritrea and Ethiopia over relatively minor border disputes would erupt into a full-scale conflict. The land they disputed had no real resources. It seemed so irrelevant that the conflict was often described as “two bald men fighting over a comb.”

Whereas Isaias and Meles once danced at Mekelle, soon Eritrean aircraft were bombing it. Sniper fire, artillery barrages, tank fire, air raids, and land grabs slowed into a stalemate and World War I-like trench warfare replete with human wave assaults. By the time both sides agreed to a ceasefire, at least one hundred thousand Ethiopians and Eritreans had died in combat. The peace was cold, however, and at times it appeared as if hostilities might again erupt.

Both countries used the crisis as an excuse to clamp down. Whereas once diplomats and analysts hoped Eritrea might become a democracy, it quickly descended into autocracy. In 1999, Freedom House lowered its rating to “not free.” Isaias used the conflict to institute near-indefinite conscription—lasting decades and often indistinguishable from slavery. Ethiopia, meanwhile, while never quite as extreme, also slipped back into repression.

That Eritrea and Ethiopia have been a hairs’ trigger away from renewed conflict made their sudden 2018 rapprochement all the more remarkable. Many observers credit the Ethiopian parliament’s appointment of Abiy Ahmed, a young former guerilla fighter and intelligence officer who had previously led Ethiopia’s equivalent of the National Security Agency. His political work—efforts to address both youth unemployment and the plight of the displaced as well as his ability to build cross-ethnic coalitions—shot him to prominence.

Abiy called for peace upon his inauguration and wasted no time to pursue it. Even seasoned veterans in the region, however, were surprised by the speed with which Isaias reciprocated his efforts. In September 2018, the two leaders signed a peace agreement in Saudi Arabia. The rapprochement has been rapid, as Ethiopians and Eritreans reunite families and resume trade. There is widespread speculation that Abiy could win the Nobel Peace Prize.

Alas, while Abiy appears sincere, it is far from clear Ethiopia-Eritrea peace will last. Here’s the problem. The seventy-three-year-old Isaias sees himself less as an equal to the forty-two-year-old Abiy than as a father figure and guide. Even at the best of times, Isaias’ concept of diplomacy is dictating his position and then waiting for opponents to accept it without any compromise. When the adversary or partner is a generational younger, the chances that Isaias will compromise recede from miniscule to nonexistent. Bilateral issues will inevitably arise, and it is unclear whether ordinary Ethiopians—let alone a fictitious political coalition—will back repeated Abiy’s concessions. After all, from the Ethiopian perspective, they are now Africa’s second most populous country after Nigeria and, with more than 100 million, they dominate East Africa. Isaias sees Eritrea and Ethiopia as equal, but Ethiopians will never accept equality with a country whose population is just one-twentieth of their own.

So, when Isaias raises a complaint and Abiy has no room to maneuver, what Isaias do? In the past, Isaias has shown a willingness to subordinate regional security and his country’s economic health for the sake of his own twisted sense of personal honor. Just as Isaias and Meles went from comrades and friends to enemies within just a few months, so too could Isaias and Abiy. Add into the mix that Ethiopia is growing more democratic while Eritrea has become the North Korea of the African continent, and Isaias has personal reasons to put the brakes on or even reverse the peace. Isaias may temporarily welcome the economic infusion that peace brings his devastated and impoverished country, but he will not continue it at the expense of his own power.

Is peace between Ethiopia and Eritrea a good thing? Certainly. But optimism should not cloud diplomats and analysts to reality, nor do dictators like Isaias suddenly change their stripes or behaviors overnight. Realism dictates not only rightly celebrating progress, but also recognizing just how tenuous it may be and planning proactively for the chance that the rapprochement might be fleeting.